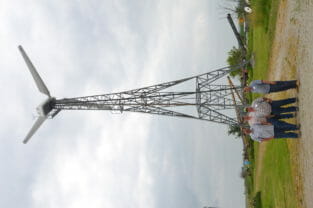 The McGrew Brothers pose in front of their wind turbine.

Steve McGrew and his brothers hosted a field day at their farm near Emerson on June 22. Topics included wind energy, low-disturbance anhydrous application, soil health, and cover crops. Steve and his three brothers have been farming together since 1979, and no-tilling since 1980. He says that they started with terraces, waterways, buffers, and filters, and now integrate cover crops in creative ways into their operation. “Actually instead of slowing your losses, maybe you start to regenerate soil,” he says. 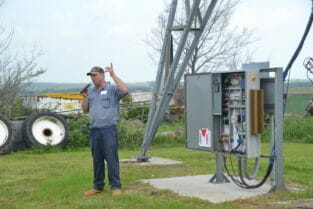 Steve McGrew gives a history of their wind turbine.

Steve says he’s been looking at installing renewable energy technology on the farm for a long time, but when the renewable energy tax credits became available a few years ago, the technology became a bit more feasible. In 2012, the McGrew family installed a 65 kW capacity WindMatic 15S wind turbine originally built in 1981. The wind turbine had originally been used in a commercial wind farm, during the first renewable energy boom in the 1980s in California. The McGrews purchased the turbine from Talk, Inc, a “remanufacturer” out of Minnesota that buys old wind turbines, and refurbishes them by rebuilding the generator, gearbox, and other parts. Now, they’re generating over 100,000 kWh per year, which works out to about a $10,000 value. 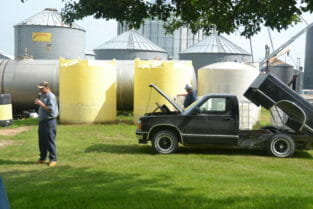 Steve talks about his electric truck.

Now that the McGrews have a more energy efficient grain bin, they aren’t using all of the energy they produce. Looking to figure out how to power more of the farm from electricity, they purchased a 1991 Chevy S-10 that runs on 20 golf cart batteries. “It’s only got a range of about 35 miles,” Steve says, “but it’s kind of fun.” 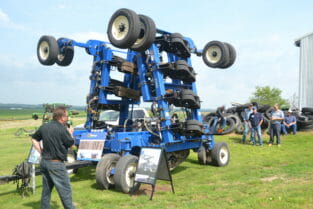 Ryan Hammes of AgSynergy talks about their NH3 bars.

Ryan Hammes of AgSynergy, an implement manufacturer out of Kansas, spoke about the NH3 bar that the McGrew brothers purchased from the company and use on their farm. One of the main objectives of the bar is to minimize residue movement. Two rubber tracks hold residue and soil in place while a coulter cuts through the residue ahead of the injector. Hammes says that the implement works well in cover crop settings, because producers can apply anhydrous with minimal disturbance after aerial seeding, reducing the damage to the cover crops. 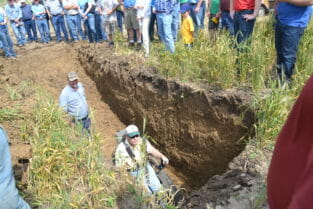 Rick Bednarek, state soil scientist with the NRCS,  spoke next at a soil pit about soil health and cover crops. He explained some important concepts connecting soil health, no-till, and cover crops systems.  He says that diversity in timing and species is important for water infiltration and retention, soil microbial health, and weed suppression.

Colten Catterton of Green Cover Seeds  talked about the various cover crop strategies he has worked on with area farmers. In addition to explaining some of the different mixes on the McGrew farm, PFI members Chris Teachout, Tim Kelley, and Robert Harvey also shared some of their experiences with cover crops.

Before lunch, Steve talked about a “relay cropping” experiment they have on a small portion of the farm. They planted winter triticale on November 2nd, and planted soybeans into the living triticale on June 9th of this year. The plan is to combine the triticale, and maybe get 2/3 of a crop of each. He’ll keep us posted on the results! 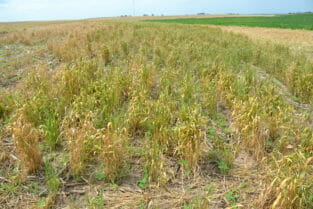 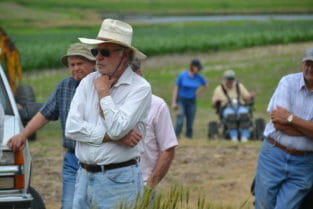 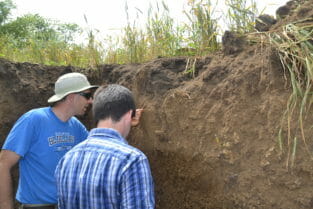