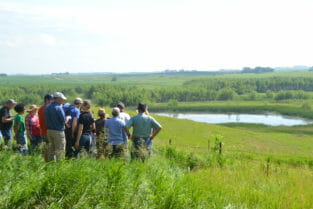 Field day crowd overlooks one of the wetlands in Paul Willis’s prairie.

Paul Willis of Thornton hosted the Summer Solstice Picnic on the Prairie, a joint Niman Ranch and Practical Farmers of Iowa event at his farm and prairie on June 20. Paul is the founding hog farmer of Niman Ranch, a network of American farmers and ranchers seeking to raise livestock traditionally, humanely, and sustainable. Over the years, Paul has become more and more interested in prairie and his converted much of this farm to prairie. 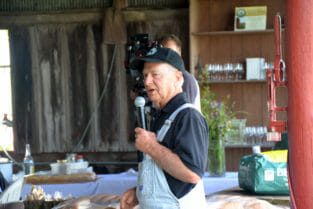 Paul Willis kicks off the summer solstice picnic, talking about the importance of prairies.

“I’ve never regretted a
single day of putting this in,” he says. His prairie was planted as part of the Wetland Reserve Program, a permanent easement program designed to protect or restore wetlands and the surrounding prairies. He says that there’s a lot to be learned from the ever-changing, fluid nature of the prairie. “Every day it’s a dynamic thing, things coming and going.” 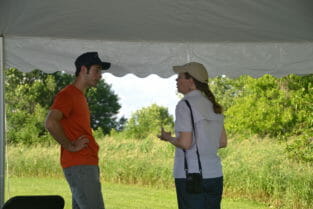 Laura Jackson, director of the Tallgrass Prairie Center at the University of Iowa, talked about the role of prairie as a model for agriculture and the importance of prairies in supporting our agricultural systems. She says that the awareness of the importance of prairies has been increasing at a hopeful rate.  “I think what we’re seeing now is an enlightenment period in agriculture.”  She says it’s hopeful that we’re not only starting to talk about pollinators, but grassland birds, and other things that weren’t a part of the conversation 20 years ago. She says it’s especially important that this conversation is taking place in Iowa: “Iowa is probably the most important area for monarch reproduction.”

Laura explained some of the projects of the center, including one of the most well-known projects that aims to restore native prairie in road ditches. She says that most of the country roadsides were sprayed and planted to brome in the 80s. The center is taking a more integrated approach to roadside management by planting prairies, which help resist erosion and prevent the spread of weeds. Another project of the center looks to build the genetic diversity of prairies throughout the state. Local ecotype seeds are collected from remnant prairies and then grown in increase plots to make them available for use by landowners.

Laura emphasized not only the importance of the prairie as wildlife habitat and pollinator habitat, but the function it has historically played in our ecosystems, and how we can learn from it to manage our agricultural systems. She says that the prairie can be used a model for designing agricultural systems, ensuring that our farms provide the same functions that prairies did, even if they look different than the original prairies.

“The most difficult task,” she says, “is that this prairie isn’t feeding anybody. How do we live up to our obligation of feeding a lot of people?” She says that she reconciles this by knowing that the prairie is necessary for providing the foundation for the agriculture that feeds everyone. “Prairie doesn’t feed people, but prairie builds soil, and soil feeds people,” she says.

With their Prairie-on-Farms program, they are cultivating a network of farmers who have planted prairie and made these sites available as teaching sites, allowing prairie experts to share the knowledge they’ve learned over the decades about prairies. “We hope to make a contribution to sustainability,” she says. 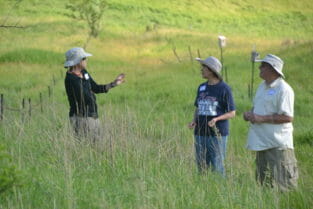 Mary Harris of Iowa State University spoke next about her research examining pollinator biodiversity and habitat. When most people think about the loss of pollinators, they think about honeybees and monarch butterflies. But Mary says this is really just the tip of the iceberg when it comes to pollination. She says that Iowa has hundreds of native bees, each important to the pollination of different crops and plants. Many of these are the ones that people think of as “sweat bees,” but also native bees also include bumble bees, leaf cutter bees, and more. She says that because bees feed pollen to their young, they are much more effective pollinators, as they “purposefully” carry pollen from flower to flower. Butterflies, such as the monarch, are nectar-feeders, and are what she calls “accidental” pollinators, meaning that they pick up a little pollen on their legs and wings as a side effect of feeding on the nectar. 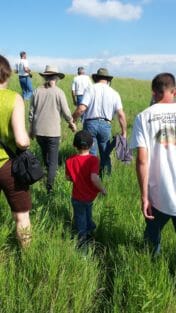 Attendees young and old enjoy a tour of the Willis prairie. Photo courtesy of Jennie Erwin

There’s a long list of impacts causing the decline of pollinators. Pesticides, such as the class known as neonicitinoids or “neonics,” have been identified as one contributor, but habitat loss has perhaps played the largest role. Pollinators need flowers, plain and simple, and when there aren’t any, they can’t live. As with other wildlife populations, disease spreads more rapidly when many insects are concentrated into smaller areas, as they are when the amount of habitat declines.

Mary cites the decline in grassland acres in the Conservation Reserve Program over the past 15 years as a major driver in habitat decline. An increase in corn and soybean acres isn’t good for pollinators, she says: “they just don’t have good resources for bees.” Fortunately, efforts are ongoing to restore habitat that does.

Both Mary and Laura talked about the STRIPS (Science-based Trials of Rowcrops Integrated with Prairie Strips) project at Iowa State University. The project began at the Neal Smith Wildlife Refuge by comparing environmental and agronomic results of the integration of prairie in different amounts to agricultural fields. In the last couple years, the project has expanded to the on-farm phase, and farmers and landowners throughout the state have begun to implement prairie strips on their farms. 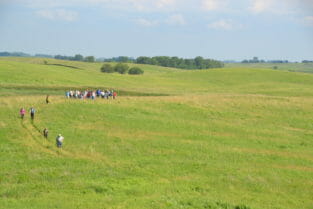 In her research, Mary has documented over 100 species of native bees using the strips at Neal Smith Wildlife Refuge. She says that Iowa used to have over 400 species of bees in the native prairies, but strips can be a good way to restore this diversity. In addition to providing habitat for pollinators, the STRIPs project has shown that by converting just 10% of a crop-field to diverse, native perennials farmers and landowners can reduce the amount of soil leaving their fields by 90% and the amount of nitrogen leaving their fields through surface runoff by up to 85%. 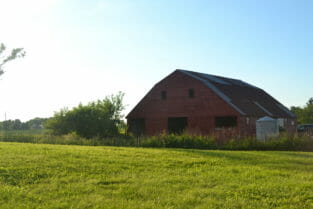 Sunset at the Willis Farm.

After her talk, Mary had “bee bowls”—traps set up at the edge of the prairie to identify insects and answered everyone’s insect questions. Paul led a tour throughout the prairie, and Laura, Mary, and prairie expert and author Karl Kurtz were all along to answer questions, and identify prairie species. Paul says one of the most important things to consider when establishing a prairie is patience: “it takes a while for it to happen,” he says. There are a number of small prairie pothole wetlands on the prairie, and he hopes to one day see trumpeter swans and sandhill cranes nesting there.

The prairie tour was followed by a local foods potluck, with hot dogs and brats provided by Niman Ranch.