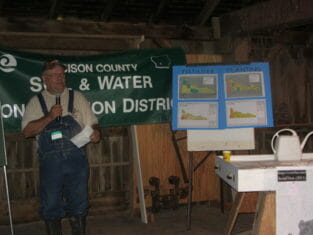 Frederick Martens of Winterset explains the yield monitoring and grid sampling on his farm.

Frederick Martens of Winterset, hosted a field day attended by 46 people at his farm in Madison County on Monday, June 15 focused on nitrate removal wetlands, pollinators, variable rate nitrogen applications/grid sampling, and cover crops. The field day began in a beautiful old barn, out of the rain on his neighbor’s land. Frederick kicked off the field day talking about yield monitoring, grid sampling, and tailoring of fertilizer application rates. He has worked with Heartland Co-op to adjust fertilizer rates according to these results, and looks forward to seeing how it works out at the end of the year.

Frederick has also been using cover crops for the past few years, and he says that he hopes to see the impact they have on soil fertility in the coming years. Frederick says he’s going to continue the grid sampling to measure that: “We hope to see an increase in organic matter as a result of the cover crops,” he says. 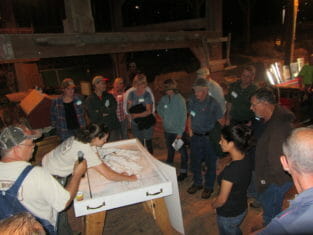 Anna MacDonald, project coordinator with the Badger Creek Lake Watershed project, shows the audience a scale model of the watershed. 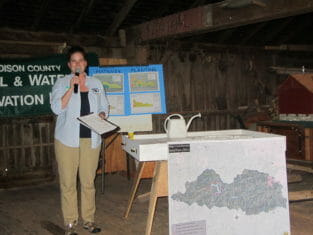 Jessie Lowry of the Blank Park Zoo tells field day attendees about a new initiative to create habitat for pollinators.

Jessie Lowry, of Blank Park Zoo in Des Moines, spoke about a new conservation initiative by the zoo called Plant. Grow. Fly. The goal of the initiative is to protect native pollinators. While the monarch has been getting a lot of press and attention (and money from the White House), she says that there are hundreds of other species of pollinators that are important for maintaining not only the production of our food, but the health of our ecosystems. Even the cotton that makes up lots of our clothing is a plant pollinated by insects!

Jessie says that everyone can play a role:  “Even just one small garden can make a difference.” She says that insects need two types of plants: host plants—where they lay their eggs; and nectar plants—where they get their food. Butterflies, for example, need milkweed plants to lay their eggs. Nectar plants have the added benefit of being colorful flowers with strong scents. For more information, and for information on good species to plant, visit the Plant.Grow.Fly. website.

Because each insect requires different host and nectar plants at different times of year, diverse, perennial prairies, like the one Frederick is establishing, are the perfect solution to increase pollinator numbers and diversity. Jessie says that it is essential to have leaders like Frederick. “Farmers have an especially big role to play, because they have the potential to make such a big impact,” she says. Waterways and buffers around wetlands and streams can be good places to start. 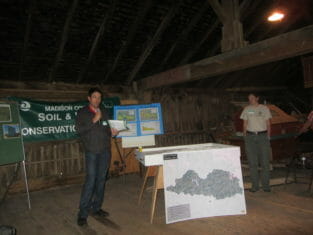 Fortunately, these buffers and wetlands have other benefits. Matt Helmers of Iowa State University talked about the different conservation practices that farmers can implement to reduce the amount of nitrates leaving their farms. He discussed the Iowa Nutrient Reduction Strategy, and passed out this handout from Iowa State Extension. The strategy is a science and technology-based framework to assess and reduce nutrients to Iowa waters and the Gulf of Mexico developed by the Iowa Department of Agriculture and Land Stewardship, the Iowa Department of Natural Resources, and the Iowa State University College of Agriculture and Life Sciences. The strategy aims at reducing nitrate loss from Iowa agricultural land by 41% and phosphorus by 29%.

Matt says that many of the practices that Frederick has implemented on his farm will not only reduce the nitrates leaving the farm, but will provide other benefits, such as providing pollinator and wildlife habitat.  He says that Frederick is a great example of a farmer attacking the problem through multiple ways: “The only way to get there, to accomplish our nitrate reduction goal, is through multiple practices,” he says. “Wetlands, saturated buffers, nitrate bioreactors, and cover crops are all ways to get there.” Check out this great presentation by Iowa State professors Matt Helmers and Mike Castellano about how nitrates are lost to the water and what we can do to prevent that. 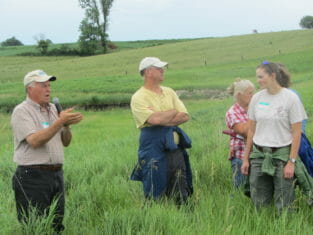 The rain cleared out after the first hour of the field day, and although we didn’t have a chance to take the whole crowd out on the hayrack, a few people made the walk down to Frederick’s wetland. Bob Powers, with the Iowa Conservation Reserve Enhancement Program (CREP) program, explained how Frederick’s nitrate removal wetland, constructed in 2011, is managed to increase denitrification in the wetland. He says the ideal depth for the wetland is about three feet, and showed how stop logs can be removed and replaced to raise and lower the depth. 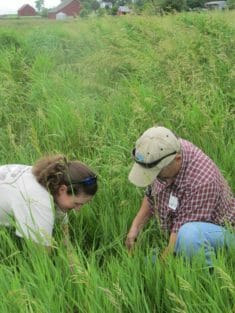 Anna ended the field day by leading a ceremonial planting of milkweed in the prairie adjacent to the wetland. Tim Palmer, PFI member from Truro, planted a milkweed plant as a symbolic effort to support the conservation of monarch butterfly habitat in the state. 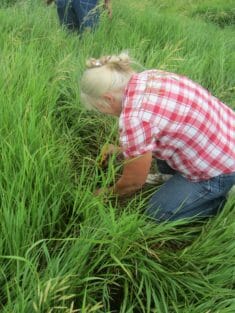 Carmen Maxwell, a PFI member of St. Charles, says that she was pretty excited to see the wetland. “Just seeing how the water treatment actually works is really neat,” she says. Carmen says she’s been getting more interested in prairies, and appreciated the opportunity to learn more. “There’s just so much out there that people don’t know,” she says. 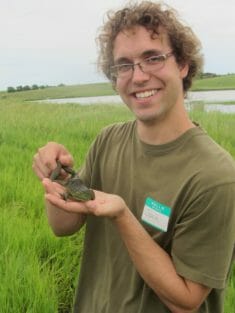 Jack Davis shows a bullfrog he found near the wetland.

Jack Davis, PFI member of Adel,  says he learned a lot from the field day: “Overall, I really enjoyed the talks about wetlands. I enjoyed learning about opportunities for cost-share and funding for conservation practices.” He says that it’s great to see efforts to improve water quality in the watershed of Badger Creek Lake. “I go out to the lake a lot,” Jack says, “and it was really neat to see individuals from different groups with different focus areas all sharing ideas about improving the lake.”