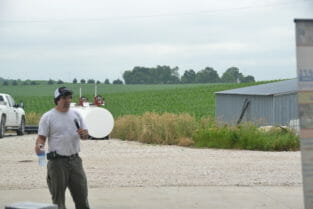 David Ausberger kicks off his field day at his farm near Jefferson.

David Ausberger hosted a field day at his farm near Jefferson on June 25. Topics included farm automation, grain bin safety, solar panels, wind turbines, and soil health. Conservation is a theme that ran throughout many of the things David showcased on his farm. He was the winner of the 2014 Conservation Legacy Award from the American Soybean Association, but doesn’t take all the credit. “This is based not just what I’m doing, but what my dad did before me,” he says. They started no-tilling in 1981, and are now 100% no-till, or “never till” as he calls it. This year, he has about 100 acres of rye that he will harvest for seed and straw, and follow that with a diverse cover crop mix. “It’s been a perfect year for rye. I’m pretty excited about that.” 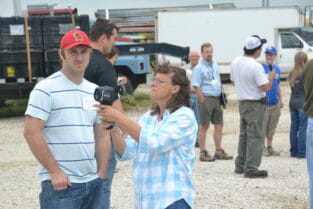 Carolyn Schwartz and Aaron Eggert check out a Flir infrared camera, used to detect heat leaks and inefficiencies in motors.

Terry Becker, of T&B Grain Services, LLC, talked about the Programmable Logic Controllers (PLC) system installed on David’s grain bin and shop. The primary function of the system on his farm is to manage the grain bin. Sensors are installed inside the bin, as well as a weather station on the outside. The PLC system constantly compares in-bin and outside moisture and temperature, and opens and closes vents and controls fan speeds accordingly. During harvest, David can monitor the level of the bin from his phone, giving him information on the flow of grain into the bin wherever he is. 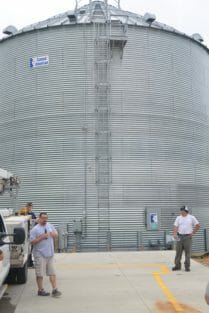 In addition, the grain bin is equipped with a variable frequency drive (VFD). Rebates from power companies are available to install VFDs, because the device eliminates the power surge that large electrical motors cause when turning on. The VFD also enables grain bin operators to “creep” the motor, allowing farmers to more safely get the last little bit of grain out of the bin.

David says the grain bin automation isn’t just more convenient, it also saves on energy. “For example, if I have a bearing going out in a fan, and it starts drawing more power, the system recognizes it and shuts it off.” Terry adds that it’s easier on equipment: “Farming is always inherently breaking stuff. The PLC helps save equipment from itself.” 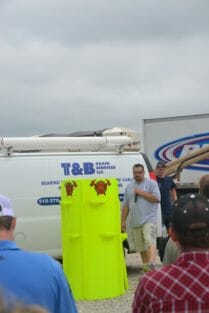 Terry also demonstrated a grain bin extraction tube built for the Jefferson Fire Department. He says the device can be operated with just a cordless drill. The tube is made of four lightweight panels that are inserted around the victim, allowing rescuers to remove grain and relieve pressure. He says when someone is buried in corn, the grain is like sand, “every time you take a breath, the corn compresses your lungs, so minutes matter.”

The Greene County SWCD brought a Soil Health Mobile Lab, and staff demonstrated some of the impacts of conservation practices such as no-till and cover crops. 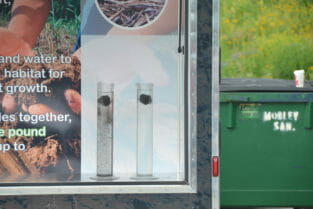 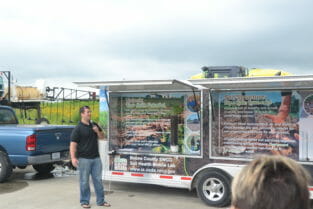 Next, David gave a tour of his new shop, which he built a few years ago. “I really built it to be energy conscious,” he says. The in-floor heat is similar to a geothermal system, the lighting is largely LED and fluorescent, and he’s got as much insulation as he could pack in. To top it off, he put a 5.94 kW solar array on the roof. “Energy costs are only going to increase throughout my lifetime,” he says. “By installing renewable energy technology, we turn that variable cost into a fixed cost.” 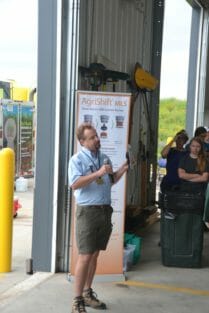 He says since installing the system, he has produced all of the energy he uses in the shop and grain bins, and therefore only has to pay a monthly connection fee. “It’s kind of a nice deal to know that it’s only going to cost $21.41 a month to run the power here.” He says solar just makes good sense: “I’m a businessman. If it’s good for me, then I’m happy. The fact that it’s good for the environment is just a plus.”

This wasn’t David’s first foray into the world of renewable energy. In 2007, he and a group of neighbors began construction on the Hardin Hilltop Wind Farm, which consists of seven 2.1 mW wind turbines. These turbines represent the first locally owned wind farm in the state, and they produce enough power annually to provide enough electricity for the entire town of Jefferson. Most of the large wind turbines like these are owned by large utilities, such as Mid-American Energy and NextEra (a Florida-based energy company).

David encourages people interested in renewable energy to act now. There is currently a 30% federal tax credit, and a state tax credit worth 60% of the federal credit. This means that for a $10,000 installation, you can get $4800 worth of tax credits to help offset the installation costs. In addition, the USDA Rural Energy for America Program (REAP) offers grants to pay for 25% of the cost. These are competitive grants, but Randy Skeie of EcoWisePower, who has worked with grant writers on the installation of numerous solar systems says that if you pay $0.12/kW or more for electricity, you have a good shot at winning a grant. These tax credits, however, are set to expire at the end of 2016. 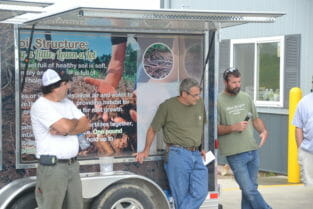 Scott Shriver and Jim Funcke share some of the innovative things they are doing on their farms.

“Timing is everything,” David says. “You can get a project done if you start thinking about it soon, and have all your ducks in row.” He says he has missed out on opportunities in the past, and was ready to go this time, with a plan in place. “If you’ve got any kind of interest in renewable energy, the time to act is now.”