Hail, giant ragweed and more: one farm’s work on resiliency 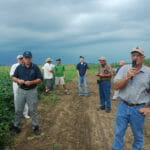 From the Rosmanns’ 2011 PFI Field Day, where volatile weather made an appearance

How are farmers responding to the increasing weather volatility we are seeing? Author Laura Lengnick looked no further than Harlan to feature one farmer’s response in her book Resilient Agriculture: Cultivating Food Systems for a Changing Climate.

Lengnick interviewed founding PFI member Ron Rosmann, who is reporting more heavy rainfall and extreme weather, particularly extreme temperature swings in winter, more wind and a longer growing season. “The worst for us is excess moisture because it means you can’t get your work done, whether it’s baling hay, cultivating, planting, harvesting, planting cover crops, you name it.”

He says the Rosmann Farm now appears to be in a “hail belt,” with hail coming every year.

We always have extremes, he says, “but the extremes have gotten worse.” In January 2014, the Rosmanns had a temperature of -18 with a 25 mile-an-hour wind. Five days after that, temps climbed to 48 degrees. The weather fluctuations are particularly hard on the farm’s cattle.

The longer growing seasons have increased weed management difficulties on the farm, particularly with giant ragweed, which has been a long-term challenge in the low-lying areas of the farm, but has begun moving up the hills in the last five years. Wetter weather in May and June, combined with earlier spring warm-up and longer growing season, work together to promote the spread of the weed.

The Rosmanns use a ridge-till system, so don’t do any spring tillage until they are ready to plant. “We historically are not even thinking about planting corn until May 1, but now the giant ragweed is already getting big by then.” He reports giant ragweed is even more troublesome on his neighbors’ farms.

Ron says we need to look for solutions to get at the root causes of what is causing the flooding and extreme drought in the first place, rather than focusing on the short-term fixes such as the massive retiling that is going on (which will further harm water quality) or the focus on developing genetically modified seed.

“A testimony to the resilience of our farm system is the fact that we have never lost a crop to pests in thirty years now of no pesticides. …Of course, I’ll be the first to say we have a lot of things we could be doing better, but still, overall, the resilience shows itself in our system.”

The Rosmanns work to enhance the ecosystem services their farm provides by continually planting more trees, shrubs and crops for pollinators, more windbreaks and more wildlife habitat. In the future, Ron would like to move away from annual grain crops and incorporate more perennial nut, fruit and berry crops, both as food and as forages for livestock.

Ron farms with his wife, Maria, and children Daniel and Ellen Walsh-Rosmann and David and Becky Tompkins-Rosmann. Please join us at this stewardship farm on Saturday, August 29th for a field day and 30-year celebration of Practical Farmers of Iowa and its members.