Amid the bobolinks flying and the cows mooing, I found the legacy of Dan Specht alive and well this week.

Some of you are new to Practical Farmers and didn’t know Dan. He was one of PFI’s most beloved members, who attended more PFI events than practically anyone. He died two years ago this month in a farming accident on his farm near McGregor. 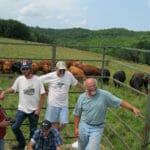 Dan was passionate about cows and ecology and how to marry the two. He had a soul mate in his interests in Mary Damm, an ecologist who lives in Indiana but visited and corresponded with Dan for 10 years. When Mary found out that the family was going to have to sell Dan’s farm, she put together the money to buy it.

And now she is working with Dan’s brother, Phil, to maintain the Dan Specht legacy. Phil has worked very hard over the last couple years not only keeping his own dairy operation going, but also keeping Dan’s passions going as well. Phil has been featured in two recent newspaper articles on what he calls his “Bobolink Legacy Project.” He is conducting research on how grazing patterns affect the nesting habitats of the famous grassland bird. 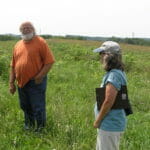 Because Mary has purchased Dan’s land, the farm will continue in grass–and the multitudes of bobolinks will continue to have their nesting habitat. Phil must be doing a good job: Mary and I spotted eight bobolinks on our short visit there Wednesday,

Look for more on Phil’s and Mary’s project in future years.

Some good news indeed! Thank you, Dan. And Phil. And Mary. 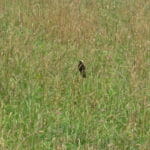 the bobolink on the Specht/Damm farm