Keep the Farm As a Farm: The Legacy of Angela Tedesco 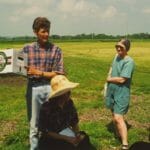 Turtle Farm, a 20-acre farm located at Granger, Iowa, is a diverse organic vegetable farm for community supported agriculture (CSA).  I have grown more than 30 types of vegetables and fruit and hundreds of varieties on this farm.

My husband, John, and I have owned the farm since 1998. Because we were already settled in our home in Johnston when we purchased it, we do not live at the farm. After I graduated from Iowa State University with a degree in horticulture, I rented ground for three years while we searched for ground to purchase. We had been searching for land closer than the rented grounds I had been using the previous three years, which were all 30 minutes away from home at Norwalk and Adel.

Over the years, I grew the CSA from 30 to 180 members. The farm also became more mechanized, although not as much as it could have been if I had been a more skilled farmer and purchased more equipment sooner.  In the beginning years, I hired people to till the garden in the spring and to spread compost at times, and I purchased straw from others for use on the farm. Since no one lives at the farm, I have chosen not to have animals. Animals would have made it a more holistic farm.

In the beginning, I set up a hoop house and moved in a walk-in cooler that were purchased from other farms. The hoop house was used originally for in-ground production of a few crops, but later just for transplant production. A canopy was set up initially by the cooler to work under, but eventually I had a barn built and used one side of it for packing produce and a farm stand area, and the other for equipment storage. I had a deep well drilled when the farm was purchased since vegetables and fruit are difficult to grow reliably without irrigation. Since the land was bare ground (we purchased 20 acres off of a 99-acre farm), we also installed a driveway.

The farm had been previously conventionally farmed so it was three years before it could be certified organic.  Since I was no longer on rented ground, I planted perennial crops– asparagus and berries–that my customers had been requesting.  I also planted blueberries, but quickly learned how attractive they were to deer and decided I would not plant them again until I was willing to fence them.

At one point, I received a Trees Forever grant to plant crops in the buffer zone of the farm. A buffer zone is required around organic crops to protect from potential drift from neighboring farms and homes.  I planted peach trees, hazelnuts, elderberries and red twig dogwood alongside a row of evergreens.  Unfortunately (or fortunately, for space for tractor turnaround and mowing) the evergreens did not survive.

Beehives serviced by others have come and gone at the farm. Heat was added to the hoop house when transplant sales were added. I used a heated glass greenhouse at my home in Johnston to start transplants in the winter, reducing the need to drive to the farm.

As I gained farming experience, I added U-pick strawberries. U-pick customers were asking what else was available for purchase on the farm, so eventually I added a farm stand and sold excess produce on Wednesday evenings and Saturday mornings.

When Ben Saunders, who had been a part-time employee for several years, was added as a full-time employee and then farm manager, I tried to ease out of farming. Two other enterprises were added to support this transition: Organic transplant sales to the public and other organic growers in the spring, and extending the CSA season with a fall share in the month of October. After phasing out over two years, I retired from active farming at the end of 2012. The farm is now rented to Ben, who continues to produce organic transplants and a CSA (Wabi Sabi Farm).

I remember so many things about the farm: Dew drops on leaf margins and spider webs. Birds of all kinds — from bluebirds and barn swallows to white pelicans and raptors– overhead. Emerging plants that line up and down the row and transition to lush full-grown plants loaded with fruit. A room or cooler full of harvested veggies and fruits, and the packed boxes for customers.

I remember the sounds of the meadowlarks and killdeer in the spring and the hawks screeching overhead, rain drops on the hoop house plastic, and the clicking of the stirrup or wheel hoe as it moves through the soil. And of course mosquitoes buzzing.

I love the aroma of basil if brushed and other herbs from rosemary to lavender, a barn full of freshly harvested garlic and ripe strawberries in the heat of the day. The scent of tomato foliage as I trellis or pick them was pungent and the scent of blooming thistle (ouch!) was sweet.

I remember the feel of firm squeaky cabbage, pulling potatoes out of the soil, the itchy yet soft pubescence of okra and the itchy spines of cucumbers and squashes. I loved tasting the first crops in the field as they ripen, especially asparagus, radishes, sugar snap peas, strawberries, raspberries and cherry tomatoes.

Each year the weather is a different challenge, which makes it hard to get good at doing this thing called farming. The animals and insects on the farm were continuous companions, teachers, inspiration and indicators of health. The crops were returning friends each year who provided me with constant miracles of the bounty of food from tiny seeds. Where else could I find ‘Hakurei’ turnips, ‘Amish Paste’ or ‘Garden Peach’ tomatoes, ‘Rosa Bianca’ eggplant, and ‘Amish Pie’ pumpkin?

It is an intense experience to dive in, plan and execute producing food for so many people each year.  It is like birthing a child with a similar load of responsibility, given the commitment. I found such joy in educating people about the farm and their food and the process of getting food to their table. The whole experience gave me such a gift of spirituality.

I appreciate the people who accompanied me on this journey, especially those employees, customers and volunteers who returned for more than one season and understood that this is such a special endeavor where much is required of you, but much is given in return. My associations with colleagues that began in Iowa Network for Community Agriculture and continued with Practical Farmers of Iowa were so necessary and fulfilling for the success of the farm.

The number one goal for my farmland is to keep the farm as a farm for someone to continue using it in a sustainable manner, preferably organic. The farm is on the edge of the town of Granger and selling it to anyone without those goals would very likely mean it would become a housing development.  The farm went from being a conventional one to an organic one that is a diverse reservoir of wildlife, insects and soil life that took years to develop.  How the land is used could certainly vary from the use of the farm by one family, to joint ownership by several or numerous families, to use as an educational “opportunity” by a nonprofit.  Depending upon its use, it could also serve as a model of urban agriculture, showing ways that land can be preserved even with development.

With this farm, I was able to figure out “what I wanted to do when I grew up,” even if it was in my forties, and to go on and be able to accomplish it with some success. The farm was and still is a good educational tool. In its now urban environment, it stands as a beacon for preserving land for farming over development.