Nearly 160 people made their way to Rosmann Family Farms in Harlan, Iowa, on Aug. 29 to tour the farm on hayrack and help celebrate Practical Farmers of Iowa’s 30-year anniversary. To kick off the celebration, Ron and Maria introduced their family members – Daniel Rosmann, Ellen Walsh-Rosmann and their son Xavier; David Rosmann and Becky Tompkins-Rosmann; and Mark Rosmann (who works for the USDA Foreign Ag Service in Washington D.C. and couldn’t be there).

“We’re here to celebrate the relationships that have been built over 30 years,” remarked Ron, who then opened the floor for several long-time members who were present to share their reflections and memories. 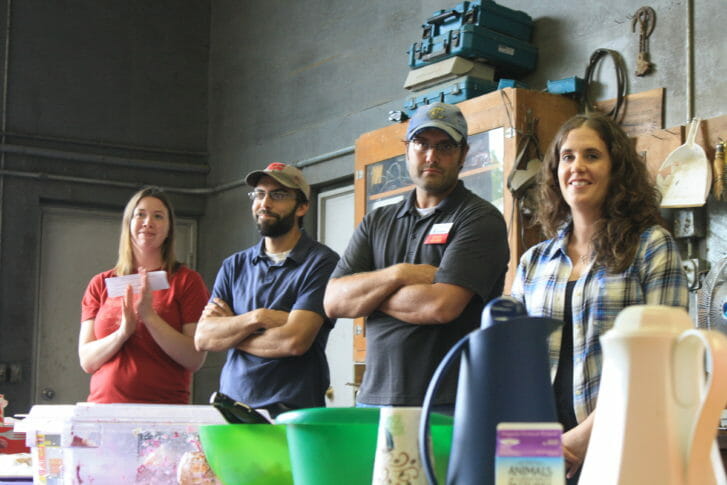 Tom Frantzen and his wife, Irene, have been members since 1987, and thanked Ron for guiding them through organic transition on their farm in New Hampton. “PFI members are our true friends, people who have influenced our life in lasting fashions,” they said.

Cindy Madsen, from Audubon, then shared her and her husband Vic’s story. When they joined Practical Farmers in 1988, they farmed conventionally and raised pigs in a CAFO. Now, most of their acres are certified organic and they raise hogs for Niman Ranch. Cindy said the inspiration to make these transitions came from Practical Farmers, and praised PFI for being a “mom-and-pop, family-friendly group of farmers that will always help answer your questions.”

Vegetable farmers Denise O’Brien and Larry Harris, from Atlantic, have been members since 1994. For Denise, “the real community of strong, willful farmers and the growing number of young farmers in western Iowa” is what she especially admires about Practical Farmers.

Paul Mugge, a member since 1989 from Sutherland, pointed out PFI’s relationship with other organizations. “One of the great things about PFI is its collaboration between ISU Extension and the Leopold Center. This relationship is great for people and for research, and I’m proud to be a part of that.”

Colin and Carla Wilson said they turned to Ron Rosmann and Dick Thompson years ago to help guide their farming transition. The Wilsons, from Paullina, who have been members since 1986, “appreciate PFI’s family atmosphere,” which helped bring back their nephew, Torray, to the farm and allowed them the opportunity to work in Haiti. 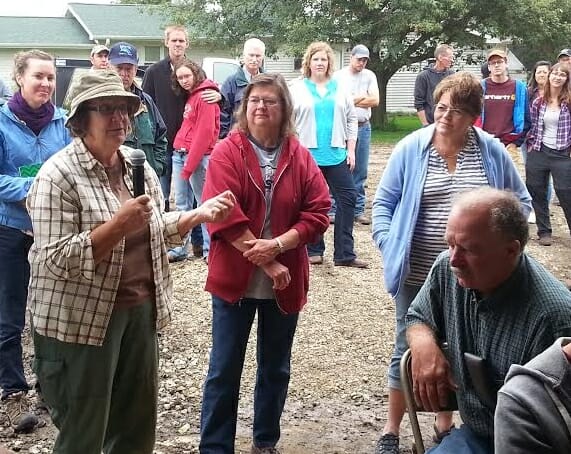 Denise O’Brien, Cindy Madsen, and Irene and Tom Frantzen speak about their years with PFI

Supporting the Next Generation

After long-time members shared their reflections, David Rosmann asked all the beginning farmers to raise their hands. Many hands went up – an encouraging sight to see (and a reflection of Practical Farmers’ focus on helping the next generation)! 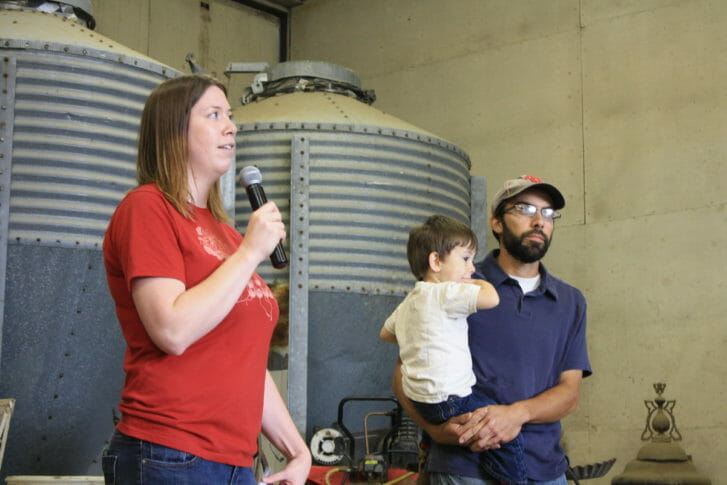 Ellen Walsh-Rosmann tells the audiences about her and Daniel’s latest local food supply projects, while Daniel holds their son Xavier.

“There are many young families with young children here,” David said, “which assures us that PFI is in good hands. There are hundreds of years of experience combined in this room, which will be passed down to the next generation.”

Ellen Walsh-Rosmann and Daniel Rosmann were among the young families who had returned to farm and are helping to create a viable rural community. The couple explained the diverse enterprises they have started, including FarmTable Delivery, a local foods distribution service that helps address challenges (such as distance from markets and lack of time to deliver product) that can prevent farmers from scaling up. Earlier this summer, Daniel and Ellen also opened Milk and Honey, a local foods restaurant in downtown Harlan.

“Seeing a room full of people eating organic, local burgers is encouraging,” Ellen said. “Many of these people have probably never eaten organic, local meat before.” Ellen and Daniel are also exploring the possibility of a shared, commercial kitchen in Harlan. Their goal is to provide infrastructure support to revitalize rural communities.

Reflecting on the Past and Future 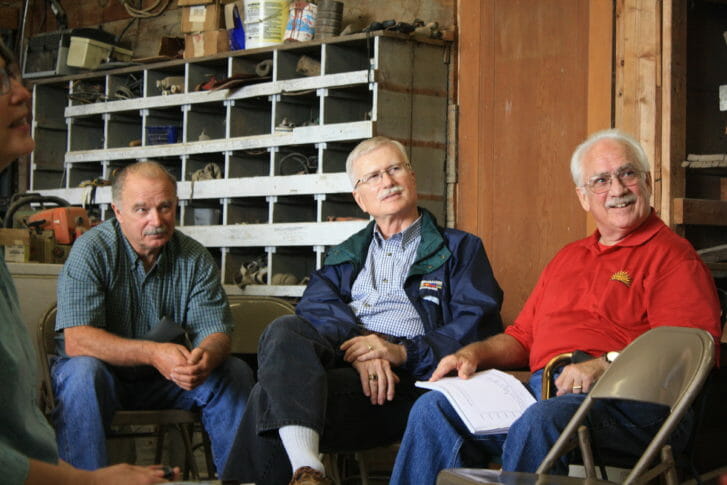 Several speakers were invited to reflect on Practical Farmers’ history and future direction. “Good balance is best; nature seeks a balance,” Practical Farmers co-founder Larry Kallem told the audience. “We live in a climate of extremes these days, and there needs to be a middle group. I hope PFI stays in this middle place, and all types of farmers remain interested in PFI.

“Practical Farmers members always have a way to learn from each other, to seek that balance, to seek that intelligence that comes from listening to somebody with a difference experience.” Larry says he believes that remaining committed to this middle ground – where people of all backgrounds, farming enterprises and interests are welcome – will help Practical Farmers of Iowa remain relevant over the long-term.

Mike Duffy , a retired Iowa State University ag economist, commented on the “power of foresight PFI founders had.” Reflecting on what the next 30 years might bring, he said:  “Continually challenging and testing [the status quo] is what will continue to make PFI great.” 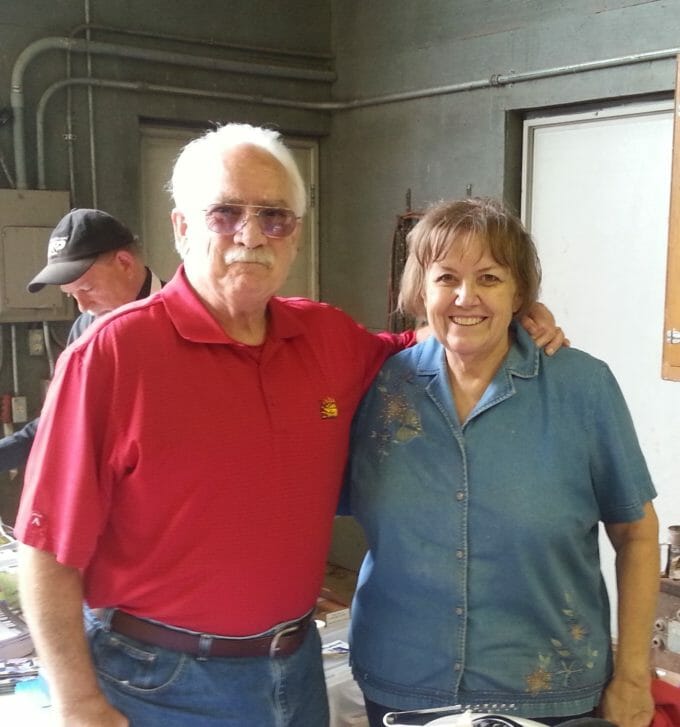 Kathleen Delate, horticulture professor at Iowa State, spoke on the current status and future of organic farming. Teresa Opheim, PFI’s executive director, praised the Rosmanns for having “a showcase farm and being showcase people.” Teresa also acknowledged the next generation: “It’s delightful to see children coming back to the farm, and we’re thrilled you’re farming and have chosen to become PFI members on your own.”

As for the farm tour, there was much to see and learn about. We visited the feeder pigs, which are marketed two ways: directly under their own label, and also through Organic Prairie. We toured the farrowing barn, and Ron shared his plans for retrofitting the family’s current barn and putting up a hoop building in the future. 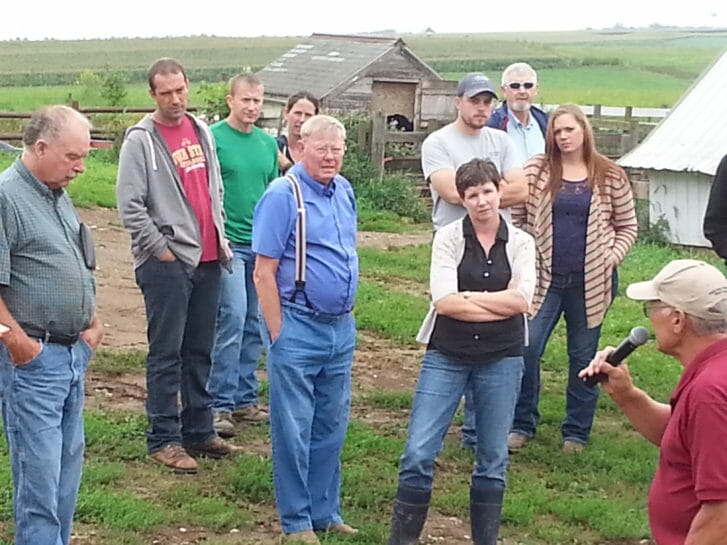 We walked out to the popcorn field and discussed planting rates, seed varieties and yield. After loading three hayracks, we viewed cover crop and soybean fields, discussed crop rotations, and watched the herd of Red Angus cattle stampede as they were let into a nearby pasture.

Maria Rosmann then discussed the history of Farm Sweet Farm, the on-farm store she operates, and many visitors stopped in to purchase the Rosmanns’ famous organic popcorn and other local goodies.Many old friends reacquainted, new faces were introduced and memories were shared. What a fulfilling day! 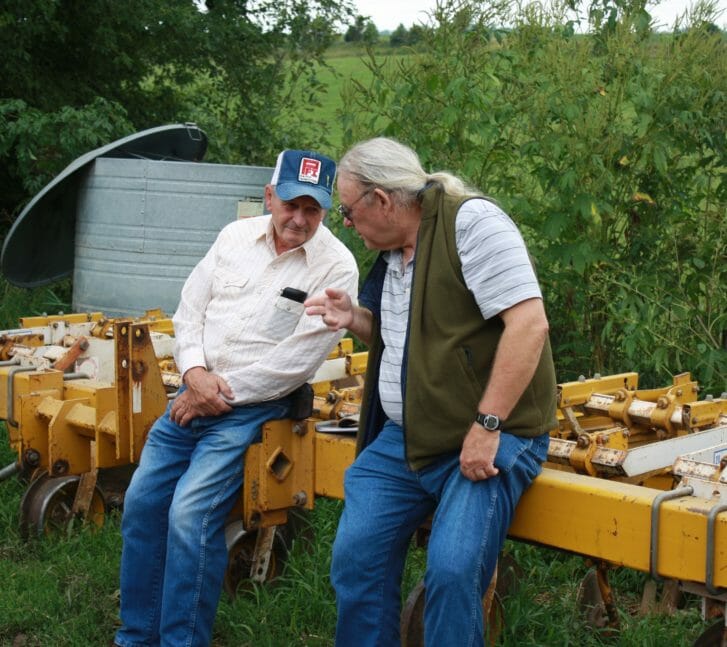 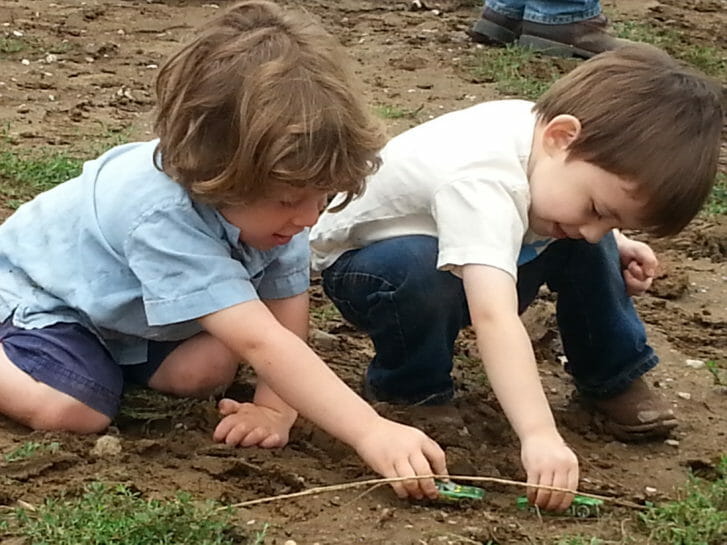