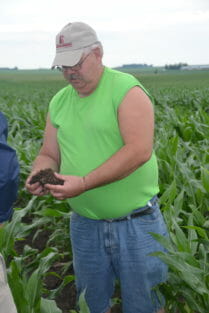 Fred Abels, organizer of the Grundy County Fair’s Soil Health and Cover Crop workshops examines his soil during a past field day.

The Grundy County fair happened back in mid July. As part of the regular fair activities PFI member and SWCD commissioner Fred Abels organized a cover crop and soil health event following the introductions for the Every Day Tractor Ride. For those who arrived early at 7:30am sweet, homemade cinnamon rolls and egg casserole were served while attendees listened to Steve Johnson from ISU Extension give a report about ag markets and trends. Secretary Northey shared some insights about the state of Iowa’s crops and Mike Pearson from IPTV’s Market to Market talked about logistics for the day’s tractor ride for those attending. Mike segued to the Soil Health and Cover Crop meeting by encouraging those in the crowd to “not farm naked” and use cover crops! It was a great way to kick off our workshops.

70 farmers and others stayed for the workshops. Steve Berger a long time user of no-till and cover crops presented about changes to his southeastern Iowa farm from the use of these two practices. Steve shared how he has committed to cover crops and makes it work on his farm. He mostly drills cereal rye to have the best stands but has used aerial seeding and also tested out other cover crops like annual ryegrass. Steve has seen changes in organic matter on his farm especially in places where the soil was thinner to start. But he says it takes commitment and a cover crop plan to get it all done. 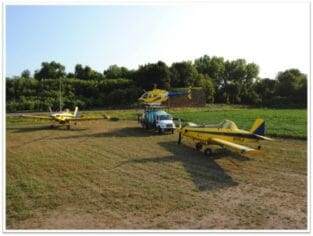 See more of Brian’s presentation by clicking on this picture.

Brian Berst, a pilot from Parkersburg with Klinkenborg Aerial discussed ways they are making aerial application of cover crops easy, convenient and successful.  Brian showed how they have checked seed distribution in the field following seeding and ways they try and best calibrate their seed hopper to more accurately apply a seed blend.

See Meaghan presentation by clicking on this picture.

Following Brian, Meaghan Anderson from ISU Extension shared research about herbicide considerations farmers need to remember when adding cover crops to their corn and soybean fields. Residual herbicides could cause cover crop injury and ruin all good intentions to cover up the soil. With improved planning, herbicides can still be used for in-season weed control but better accommodate for cover crops.

Check out Economics of Cover Crops

Jamie Benning, ISU Extension and Liz Juchems, Iowa Learning Farms shared results about how to quantify cover crops’ return on investment. Depending on your soil type and potential erosion they estimated cover crops can cut erosion in half or more. That reduction is valued between $6 and $15 per acre just in soil. The nutrient value of that loss can range from $2-$10 per ton. Plus the changing value on average was valued at $0.49/ton. So quickly those costs of losing soil adds up and seems to justify making the investment in cover crops even more.

Folks from Hagie Manufacturing took the stage after the break and shared pictures of a modified highboy that could be used for cover crop seeding into the standing crop. PFI has been working with Hagie on a seeding height study at three locations. Next year we will have results from that study. 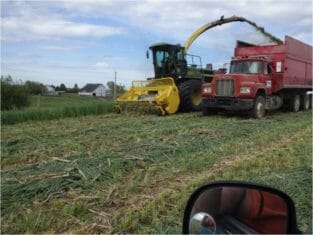 Check out Fred’s pictures and a few notes about harvesting ryelage.

Fred Abels shared his observations from harvesting ryelage this spring to feed his beef cattle. Fred wants to shoot for lactating animal feed quality but was only able to obtain 11% protein. This was more than likely do to the time of cutting the rye. But Fred harvested enough tonnage to make it worth it to him. He plans to try this again and keep refining his method to improve the speed at which the silage can be put up and shoot for a higher protein level. See some of Fred’s comments by clicking on the picture. 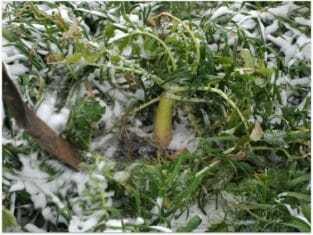 See pictures from Tim Recker’s presentation about cover crops on his farm.

The day ended with a hearty lunch and good discussion.