Dave Schmidt of Audubon was the first member to get a chance to use PFI’s new FLIR One thermal camera. Dave has both black and red-hided cattle and has noted differences in their susceptibility to being bothered by flies in the past (https://www.practicalfarmers.org/farmer-knowledge/research-reports/2015/fly-monitoring-for-grazing-cattle-2014/). This time he wanted to know whether red-hided cattle were more heat-tolerant than black-hided cattle. To do this, he used the FLIR One thermal camera device to take photos of the left side of about 40 of his cattle perpendicularly from about the same distance. Then, he used the FLIR Tools app to isolate data from a box from behind the shoulder to the back of each animal, and recorded the minimum, maximum, and average temperatures within that box. 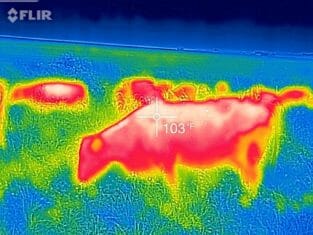 Check out some of the cool pictures Dave took. You can see that the camera takes a picture of both the actual image (left) and the thermal image, then blends the two together (right).

Please call (515-232-5661) or email: nick@practicalfarmers.org if you are interested in trying out the camera on your farm.