Bakehouse Legacy: “Why would someone want to beat their neighbor by a bushel?” 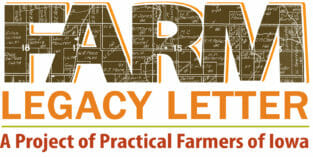 For 20 years now, I have been farming this land that goes up to the West Nishnabotna River one mile to the west. My great-great grandparents moved here from Indiana in the 1880s and built this house that my wife, son and I call home. I moved to the house in 2001 and married my wife in 2004. Our son, Anderson, was born in 2010. It is amazing to live in this three-story, 20-room house but also a big responsibility to maintain it. While we have had to concede some of the authentic parts of the house—push-button light switches, wavy-glassed windows and no air conditioning to name a few—we have tried to maintain the keyhole window, the fountain in the front yard and as much of the original interior woodwork and finish as possible. Though no longer in service, the original behemoth of a coal burning furnace still sits in the basement, a silent testimony to the sheer BTUs it took to heat this house before insulation, new windows and more efficient, zoned propane boilers came along. 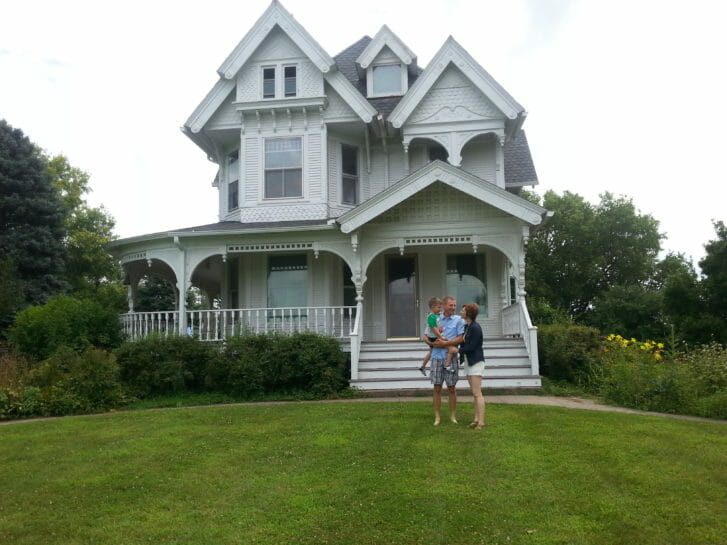 My great-great grandfather farmed 2,000 acres with his brother. He was a huge cattle guy. The railroad spur came up into our property, and he would send cattle to Chicago on that. The track was taken out in the late 1970s, but in dry years, you can still see it. That 2,000 acres were then divided among their three children.

The 700 acres of farmland we now have were incorporated in the late 1970s and named Maple Edge Farm. My parents started transferring shares to my sister and me as soon as they could, maximizing the yearly gifts they could make. My grandfather almost lost the farm when his parents died and he had to pay inheritance taxes, and he spent years getting the farm back on track. That was a big lesson for my parents. He and my grandmother were savers—neither a borrower nor lender be. “Debt” was a bad four-letter word to them.

Growing up, I remember playing outside all day with my sister. We rode wagons, played hide and seek, pretended to be the “Dukes of Hazzard.” When I got older, I would go down to the river. I also remember waking up in the summer and hearing the mourning doves, wrens and robins. I was so glad I didn’t have to go to school!

The magnolia tree would bloom right before planting. When the cicadas came out, I know summer was half over, and that made me have a pit in my stomach. I remember eating strawberries right out of the garden. I remember waking up and seeing the flood waters from the Nishnabotna and worrying whether they would come up to the house.

I didn’t know until I went to college that others didn’t have the stable childhood I did. My parents and grandparents provided me with such an amazing life. There is such turmoil in the world; I wish others could have what I have. Our son needs to understand that he’s very lucky, and he should be compassionate with others.  I know that if I were in trouble, my family would always be there for me.

When I graduated from high school, Dad told me I had to go to college, so I went to Drake University. After I finished at Drake, I worked construction in Des Moines for a year. I didn’t get pressure to come back, but I wanted to. Hay was my first job on the farm. My dad said “good luck, this is yours.” Then the cows became mine, and finally the corn and soybeans. But really my dad and I still make decisions together, and he still helps out with corn and soybeans.

We had wheat at one point, and now I am Interested in getting back to the wheat. There is less pasture on this farm than in the past.

The technology changes even since I started farming have been amazing: GPS, yield monitors, computers in your pocket with our phones. You can collect data so much easier, and then make decisions based on it. I take pictures of what’s going on in my fields and send them to my agronomist. And the creature comforts in the tractor, like heat and air conditioning!

How crazy $400 an acre rent is! We have so many government programs that help us, but they also make you complacent. We don’t try to innovate. Having a little pain isn’t such a bad thing.

I want to keep harmony among family members, among neighbors, and with those who aren’t part of this farming community. This is a place of solace, and our friends enjoy coming out here to visit from Omaha and other places. I want the farm to bring our family together, not drive us apart.

I would like to keep the farmland together, but it could be there is a compelling reason to split it up in the future. I also want to provide a place for someone to have a decent job here. I don’t want to work 12 hours a day, seven days a week, and I am thinking about that now that my dad is retiring. I may hire someone full-time. It is hard, though, to think about having someone here full-time who is not family!

I am very attached to the land. I want to ensure my son is taken care of and the land stays in the family. So we’ve been proactive from the beginning on that. If Anderson wants to farm, I’d like to provide land for him, but I do not want to force it on him.

My top goal for my farmland is to use it to conserve or improve soil, increase biodiversity, improve water quality and other conservation. If we start regenerating soils, a lot of other environmental issues will be easier to solve. It is important to decide where we want this farm to go, so our family is working on a holistic farm goal. I want to get off of the 300-bushel-yield mindset and into regenerating the land. Iowa loses an average of five tons of topsoil per acre. We don’t even have the basic tenants of good stewardship down!

I also want to use my farmland to benefit a worthy cause that is part of a larger whole. The family farm can be isolating. At the same time, what we do affects all those around us. If we can share our stories, we can all become better stewards of the land without going broke. My neighboring farmer friend Steve McGrew, for example has been such an inspiration. I hope his farm and ours will be seen as a center of sustainable agriculture. As PFI co-founder Dick Thompson said, why would someone want to beat their neighbor by a bushel? My goodness. Neighbors should be sharing.