53 people gathered at Dan and Bonnie Beard’s dairy farm on a sunny Saturday in October. Dan and Bonnie farm with their sons Sam and Tom, just northeast of Decorah. They bought the farm 35 years ago, deciding right off that bat it was best suited for a dairy operation. In the 1990s they started reading about grazing and experimenting with cattle breeds that did best on grass. Soon, their herd of purebred Holsteins disappeared and was replaced by Jersey and Jersey cross cattle. “We like a small cow that can crawl around on our hills,” explained Dan Beard while standing next to their herd of milk cows with a few Dexter beef cattle mixed in. The acres are rotated between pasture, hay land and organic row crops. They are certified organic and their milk is shipped to Organic Valley. 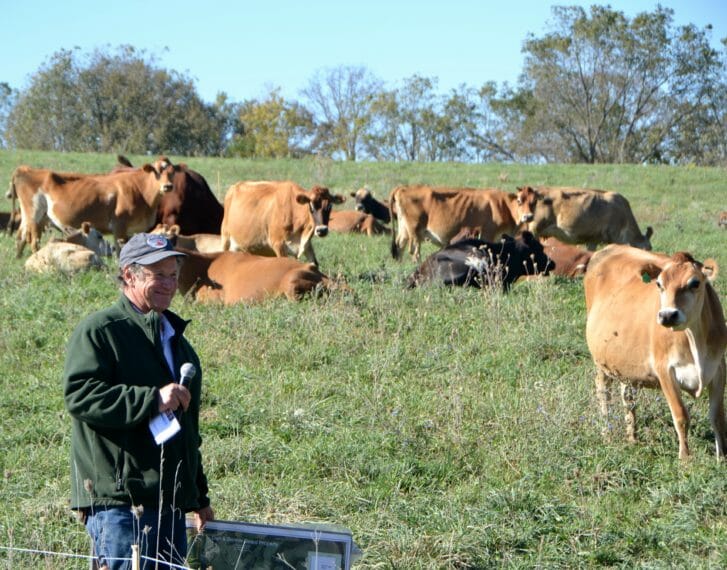 Energy Audit
The focus of the day was on-farm energy use. Winneshiek Energy District conducted an audit at the Beard’s farm last March; Kayla Koether and Joe Schultz discussed the audit findings. The top four energy users on most dairy farms are: milk refrigeration, vacuum pumps, hot water and barn ventilation. Because the Beards harvest solar energy through grazing grass every day, they inherently aren’t using much energy compared to other dairy operations, so it’s harder for them to make cost effective improvements. It’s more cost effective for larger operations to make energy improvements, simply due to economies of scale. 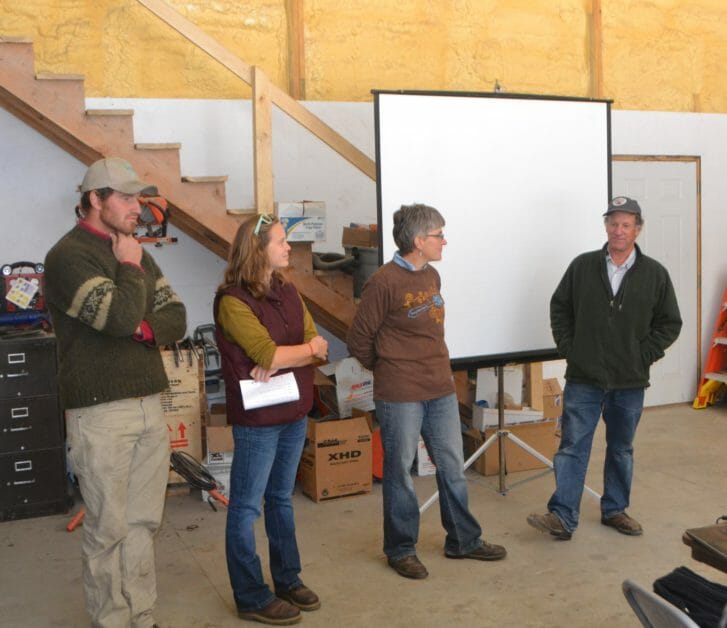 Joe Schultz spoke about the costs of upgrading the variable frequency drives (VFD) for the vacuum pump on the milk units, which regulate the pressure on the teat during milking. The VFD is only used four hours daily; making it hard to justify spending money to upgrade the system. The Beards are planning on upgrading to T8 fluorescent light bulbs, which are more affordable than LEDs at this time. 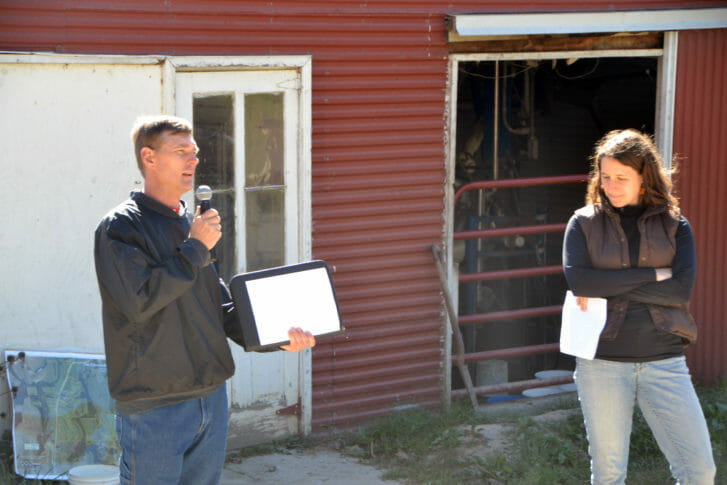 Joe Schultz and Kayla Koether discuss the energy audit in front of the milk house and parlor.

Dan and Bonnie are also looking into incentives for preheating biomass and heating recovery systems. They use an outdoor wood boiler to heat the house, and they’d like to use it to heat the milk house, which would save them 300 gallons of LP gas per year. If they could use the wood boiler to also heat hot water, the conversions necessary may pay for themselves in a reasonable amount of time.

Back at the Shop
Jenn Bentley, dairy specialist for ISU Extension, shared economic data collected from organic dairies in Iowa. Organic Valley and ISU Extension teamed up to analyze 2014 profits from 15 farms, which the Beards were part of. This study shows profits earned and proves that organic dairying can be as profitable as conventional grazing and confinement systems.

Bonnie Haugen, a dairy farmer from south eastern Minnesota spoke about the Dairy Grazing Apprenticeship Program. The program links aspiring grass-based dairy farmers with mentors to provide a pathway to independent dairy farm ownership. On-farm experience is provided under the guidance of a master dairy grazier. Currently, a master grazier in Iowa is looking for an apprentice.

Solar and Sheep
After a delicious lunch of pulled pork, applesauce (the farm’s pigs and apples) and dairy products donated by Organic Valley, we headed to Tom and Maren’s farm. Tom, the Beard’s oldest son, and his wife Maren live up the road from the home farm. Maren is the Assistant Director of the Center for Sustainable Communities at Luther College.

Tom and Maren recently installed a 4.8 kW solar array on the southern-facing side of an old chicken coop. The important points shared with the audience were:
• Get an energy audit and make efficiency upgrades before installing solar. You don’t want your solar system to be generating electricity to cover inefficiencies. Green Iowa Americorps provided a whole house energy audit.
• Retrieve 2-3 years’ worth of electric bills in order to properly size your solar array.
• Get bids from 2-3 installers.
• Take advantage of current federal and state solar tax incentives, making solar a much more affordable option for homes and farms. These incentives can change a 12 year payback to a 6 year payback. 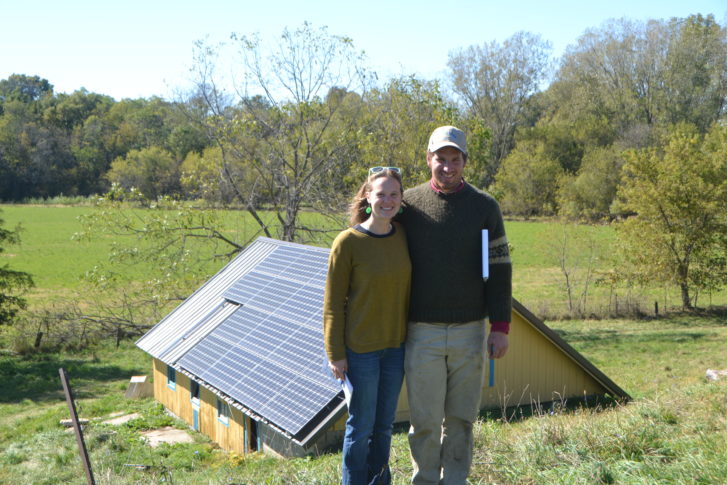 Tom and Maren Beard stand next to their new 4.8 kW solar system.

Maren also mentioned they replaced an old, leaky livestock waterer. By doing this, they received a credit on their bill and reduced their bill drastically. The solar panels are net metered, meaning they are credited for times when generated electricity is added to the grid. They have microinverters, which prevent power loss from the entire array if one panel goes down. The life expectancy of their panels is over 30 years.

To conclude the field day, we walked up to see Tom’s flock of Katahdin sheep grazing a hill-top pasture. The sheep are mostly grass-fed and supplemented with some oats. His flock is certified organic and marketed in two ways. 30-35 lambs each year are marketed locally, to the Oneota Food Coop and restaurants in Decorah. The rest are sold at the sale barn in Waverly, where he has been getting an average of $2/lb for 60-70 lb lambs.

What a picturesque field day! Thank you to the Beards for hosting. 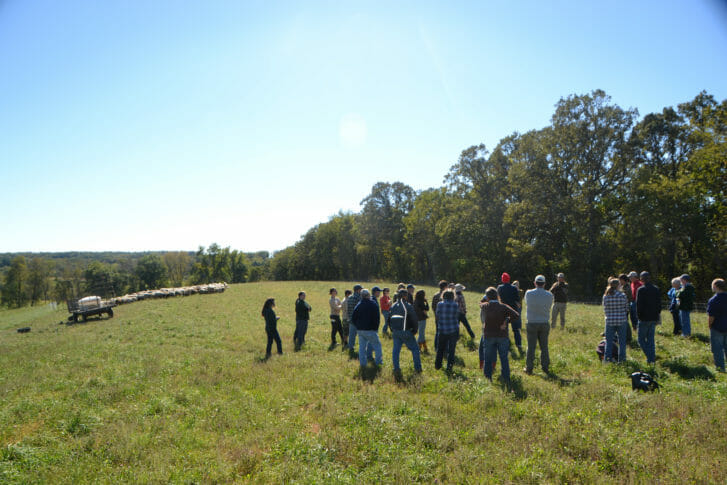