Guest blog: Abundance of Insect-Pathogenic Fungi in Organic and Conventional Fields in Iowa 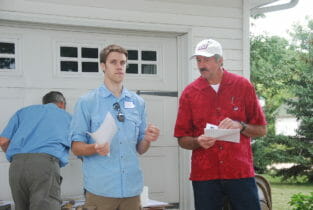 Eric Clifton shares about a study on Paul Mugg’es farm at this field day in 2011.

A number of years ago PFI farmers were asked to participate in a study measuring the beneficial fungi present in soils on their farms and a neighboring farm with different practices. Eric Clifton, graduate student on the project just finished up a publication of the results of the study and offered a blog recap about some of the highlights from the study. Guest Blog by ISU graduate student Eric Clifton eclifton@iastate.edu

Click on picture to see animation of the pathogenic fungus infecting a waxworm larva.

Insect-pathogenic fungi are widespread in agricultural fields and provide a beneficial service of suppressing insect pests that can damage crops. For our field study, we wanted to determine if specific cropping practices and soil properties were correlated with the abundance of these insect-pathogenic fungi. 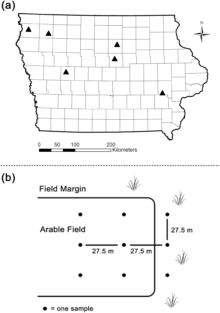 Thanks to the cooperation of several PFI farmers in 2011 and 2012, soil was sampled from corn and soybean fields around the state that were either in organic or conventional production.   Soil samples were returned to the lab where we could collect and quantify insect-pathogenic fungi in these fields.  In one year of the field study, we found that organic fields had significantly more insect-pathogenic fungi.  We also determined that percentage of silt and applications of organic fertilizers were positively correlated with abundance of fungi; but nitrogen concentration and tillage were some of the factors negatively correlated with fungi abundance.  A greenhouse experiment in which fungicides and herbicides were applied to the soil surface showed no significant effect on these insect-pathogenic fungi. 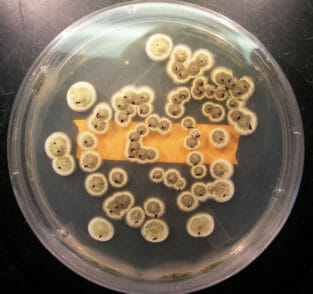 Colony forming units (CFUs) of the fungus Metarhizium that was quantified on an agar plate.

Though organic fields were originally expected to be more suitable environments for these beneficial fungi, abiotic factors like drought and cropping practices such as tillage may have greater impacts on the abundance of insect-pathogenic fungi.  Also, fungicides and herbicides applied to the soil before plant emergence may not be as toxic to these beneficial organisms as originally thought. 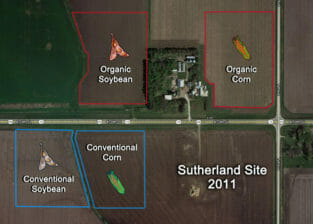 Field layout for a given area of sampling.