Interseeding Cover Crops into Corn and Soybeans: a Meta-Analysis 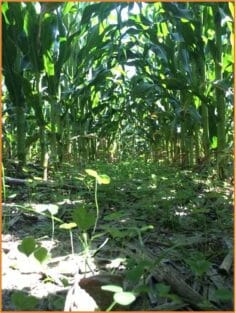 I presented results from a meta-analysis about cover crop interseeded into corn or soybeans at the American Society of Agronomy annual meetings in Minneapolis, MN. Click here to watch the presentation. Corn and soybean farmers have increased their acres planted to cover crops over the last six years (SARE 2015). Many use cover crops to reduce soil erosion, scavenge nitrogen and dissolved phosphorus, and improve soil health. Many farmers who have used cover crops for two to three years and have experienced less than desirable plant stands are testing seeding alternatives. Farmers have begun experimenting with seeding cover crops within 95 days of main crop planting.

At the beginning of this project the USDA-Risk Management Agency discouraged the seeding of cover crops earlier than physiological maturity of the main crop or later than 95 days after planting (DAP). But now the language has been updated. See the difference between Answer 1 and Answer 2 from the RMA website:

This meta-analysis reviewed published, peer-reviewed literature to determine the effect on corn or soybean yield and cover crop biomass performance when cover crops were seeded within 95 DAP main crop.

To be included the publications needed to: i) corn or soybean harvested for grain was the main crop; ii) cover crops were seeded within 95 DAP main crop; iii) cover crop species and planting date, and main crop yield was available.

Studies were located in many different countries with a majority from the Cornbelt.

The following cover crops were evaluated. 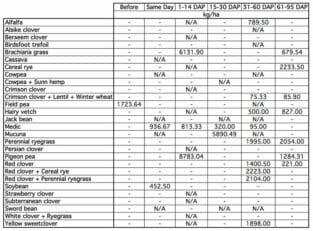 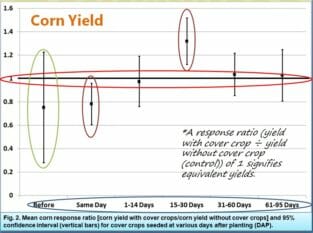 Planting cover crops before or the same day as corn, on average, negatively impacted corn yield.

Soybean yield was always negatively affected when cover crops were seeded before, the same day or within 1-14 days of soybean planting. 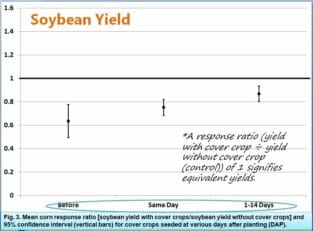