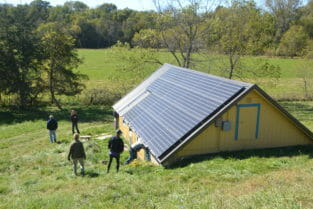 Solar panel system at the farm of Tom and Maren Beard.

Good news for people interested in solar panels! The U.S. Congress recently extended the 30% Federal tax credit for new solar panel installations through 2019. This credit was originally set be reduced to 10% after 2016. As of now, the Iowa Solar Energy System Tax Credit, (50% of the Federal tax credit, or an additional 15% of a new installation, for 2016) is set to expire at the end of 2016. That means 2016 is still the year to act for solar, in order to take advantage of the most tax credits.

I just finished an article for the Winter 2016 newsletter featuring Tom and Maren Beard of Decorah and the solar panels they had installed this year and thought one little tidbit was worth sharing as we wind down 2015 and look toward 2016. Last New Years’ Day, Tom and Maren sat down to set goals for the coming year. One of those goals was looking at the feasibility of installing solar panels on their farm. By mid-May, the panels were installed and producing power. “It was a much quicker turnaround than we had anticipated but the numbers penciled out and it seemed like a worthwhile investment for us, so we decided to move forward with the project,” Maren says. Look for the rest of the article to arrive in your mailbox in the next newsletter!

For more information about solar panels see past blogs about why and how to install solar panels on your farm by Kayla Koether.