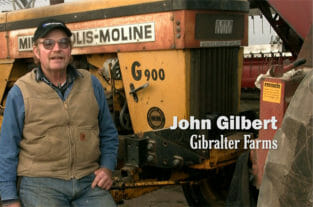 Over the past few years, more and more farmers have been wanting to learn more about growing small grains. Throughout 2016, Practical Farmers of Iowa will be sharing knowledge about small grains production, from planting through harvest and everything in between.

At the end of last year, I visited long-time Practical Farmers member John Gilbert to talk about how small grains fit into his family’s farm. You can see a video of that conversation, as well as other small grains videos, on our YouTube channel.

The Gilberts use small grains as forage, feed, bedding and cover. “We have a philosophy of using everything we can from the farm, every resource we can,” he says. For farmers interested in using on-farm resources to make their farm business more resilient, small grains are a valuable tool. “A lot of times, things don’t turn out quite as well as we had planned,” he says, “but when we don’t have to rely on one or two commodities to sell, we have a lot more legs on our stool. It’s just like when you get four or five legs instead of three, it may not always be completely balanced, but it’s going to be a lot less likely to tip over.”

Jan. 12 – “Nuts and Bolts of Small Grains Production” – Klaas Martens
Klaas Martens and his partner, Mary-Howell farm 1,400 acres in Penn Yan, New York, where they grow certified organic corn, soybeans, spelt, barley, wheat, triticale, oats, rye, red kidney beans and hay. They also raise livestock; own and operate an organic feed and seed business; sit on numerous boards and committees; speak at conferences across the U.S.; and conduct on-farm research. Klaas will talk about growing small grains as part of his operation in New York, and is eager to have a discussion on growing small grains in Iowa.
• Klaas and Mary-Howell Martens farm 1,400 acres of organic corn, soybeans, and small grains such as wheat, spelt, barley, oats, triticale, and heritage grains. They have been farming organically since 1993, and own and operate Lakeview Organic Grain, an organic feed and seed business in Penn Yan, New York.

Jan. 19 – “What a Small Grain Crop Can Afford You: Diverse Covers for Grazing” – Mark Peterson and Colten Catterton
Mark Peterson has been raising cereal rye for seed the past few years in southwestern Iowa. Harvesting his main seed crop in July gives Mark the opportunity to plant a diverse cover crop mix for the remainder of the growing season. Later in the year, his neighbor’s cattle are allowed to graze the mix. Mark will discuss how he and his neighbor decide on fencing, water and rent as part of the arrangement. Colten Catterton of Green Cover Seed works with Mark and other farmers on selecting cover crop species based on specific goals. He’ll address how he and Mark selected the Petersons’ cover crop mix, and what things to consider when choosing a mix for grazing purposes.
• Mark and Melanie Peterson farm about 500 acres near Stanton, Iowa, where they’ve been experimenting for several years with different methods to get cover crops to work with their farm. They raise corn, soybeans and small grains using cover crops and no-till practices.
• Colten Catterton is a sales agronomist with Green Cover Seed, where he helps design cover crop mixtures tailored to meet specific management goals. Colten was raised on a farm in southern Maryland where his family grew wheat, milo, corn, soybeans and hay. He has a bachelor’s degree in agronomy and a master’s degree focusing on cover crop research.

Jan. 26 – “Benefits of a Small Grain in Organic Rotations” – George Schaefer and Erin Silva
George Schaefer farms in southeastern Iowa, where he uses oats in his organic crop rotation as both a grain crop and nurse crop for alfalfa and other legumes. George will discuss this rotation, and how having small grains in the rotation spreads the labor across the year. Erin Silva will discuss research results from the University of Wisconsin-Madison, where she serves as the organic and sustainable cropping systems specialist.
• George Schaefer farms with his brother Steve near Kalona, Iowa. Their farm includes both conventional and organic practices, cover crops and a 140-head cow herd grazing on a rotational system. The Schaefers have been involved in a long-term cover crop research trial in partnership with Iowa Learning Farms and Practical Farmers of Iowa.
• Dr. Erin Silva is an assistant professor with the University of Wisconsin-Madison’s Department of Plant Pathology. Her program focuses broadly on organic agricultural production, including vegetables, row crops and pastures. Erin is a member of the Wisconsin Organic Advisory Council and is involved with organic agriculture at both the local and national levels.

To participate in the farminars, go to practicalfarmers.org/farminars and click the “Join in” button and select to sign in as “Guest.” All farminars are from 7-8:30 p.m. CST on Tuesday evenings.