How some PFI farmers plan to cut $100/acre this year

Last month, Teresa shared this article on how to cut $100/acre for corn and soybeans with the PFI list serv. Several of you responded with some of the ways you’ll be cutting costs in 2016. First of all, seed cost seems to be the first way farmers are cutting costs. Many are moving from triple stacked hybrids and traited varieties to conventional ones. Another area is growing oats and rye. We are hearing from farmers that interest in growing small grains has increased because of the reduced input costs to grow small grains, resulting in better earnings per acre than on corn and soy acres. Both methods – moving to conventional hybrids and adding small grains to the rotation – help get farmers closer to reducing expenses by $100/acre. 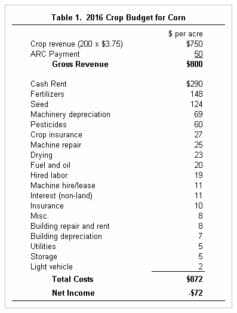 Tyler Franzenburg, who farms near Keystone, says that he planted non-GMO corn from a small company that was the lowest of all his seed costs – $140/bag – but it yielded more than 20 bushels less than another non-GMO corn hybrid sourced from a larger company. That seed cost $220/bag, but had good stands due to northern corn leaf blight resistance. The $220/bag seed yielded on par with a GMO-traited hybrid that Tyler also sourced from the same large company and which cost him $280/bag.

The GMO traits didn’t seem to pay in 2015, but the northern corn leaf blight resistance made a huge difference. “Somebody spending $124/acre on seed must be planting all full-traited stuff or not getting any discounts,” Tyler says. “The time to get best discounts is already long gone. My 2016 seed is already ordered and paid for.” Tyler says he’s cutting costs sensibly in 2016 and making sure that he’s not too cheap; he says that in 2015, he tried to cut corners and it cost him a lot of yield. His nitrogen rate will be higher than last year, but even with a higher rate his total N cost will probably be about the same due to lower fertilizer prices.

Nathan Anderson, from near Cherokee, provided a few numbers and observations:

So, from start to finish, $78/acre difference just in seed cost. This is well on your way to the $100/acre number stated in the article. That $78/acre in seed cost would have to yield 22.3 bu/A higher than the non-GMO, which in some cases is possible I’m sure. The cheapest seed on that list was the best corn hybrid on our farm last year and in our management system: with our soils, it yielded over 240 bu/A.

Some may argue that chemical costs are higher for non-GMO vs traited corn. That may be somewhat true, but to effectively control weeds with herbicide one needs more than just glyphosate anyway.

I can’t speak completely to your question/comment about 3-year rotation affects, but I will comment on a related component: reduction of applied purchased nitrogen fertilizer. North Dakota State University has recommended a reduction in applied N in long term no-till fields. We have reduced our N applications-primarily due to our predicted N cycling based on soil organic matter (OM). We have OM levels usually over 4.5%, in some cases over 6%. This OM can provide N to the tune of 100 lbs/A with 5% organic matter. We haven’t reduced our N applications by 100 lbs, but we’ve reduced them by about 35 lbs. At $.40/unit of N, that’s $14/acre.

Sometime there needs to be a conversation about how production became the holy grail of farming. It’s such a fool’s errand because no matter how good yields or production is, there’s always someone selling something saying, “But you could have done better.” Production has become its own justification, with accompanying damages being unfortunate but acceptable consequences. That’s why I get real paranoid when anyone starts talking about efficiencies of any system. Our business structures (and minimizing waste or loss) have as much (or more) to do with profitability than production.”

The big question probably should be “How could everyone who’s farming or an ‘expert’ all have been absent the day the law of diminishing returns was taught in high school economics?”  It’s one of the most basic parts. I find it somewhat ironic that this is even an issue today, considering it was one of the driving motivations behind the formation of PFI 30 years ago. Margins were much tighter then (the details were a little different), but the issue was the same: “How do we not spend all our gross on production costs?” All the original trials were looking at whether something paid enough to cover the inputs (often it didn’t), not just at the yield.  That’s a calculation no one is making on the GMO issue–How much more does it have to yield?

How do you plan to make smart cuts this year?