Should in-laws be invited to family farm meetings?

Gilmore City farmers Bob and Linda Lynch’s presentation on family farm transfer at the PFI conference has produced a spirited discussion: How involved should in-laws be in family farm meetings?

One woman (an in-law) reported that she isn’t allowed to participate in the family farm LLC meetings, and she is feeling left out. After all, she has lived on the farm and contributed to the farm business all of her adult life.  In addition, she cannot help her husband when she doesn’t know what is being said in the meetings.

Another conference participant countered that he doesn’t think the in-laws should be included. There are already too many participants with too many personalities and differences of opinion in the meetings already, he says. Adding the in-laws would further complicate things. 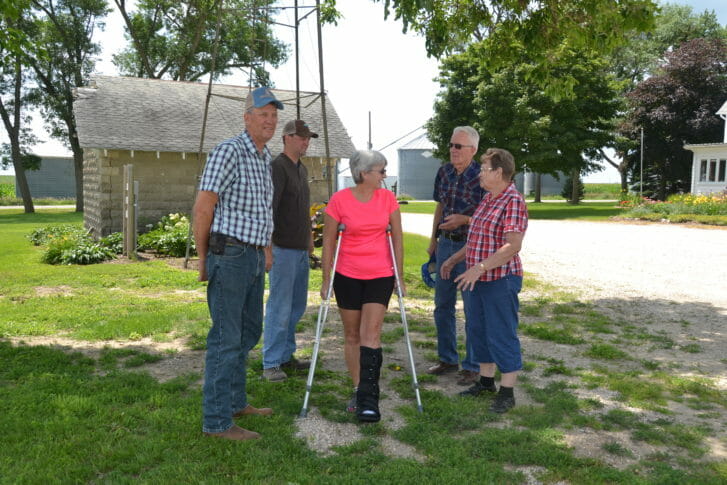 Linda Lynch (middle) presented at the PFI conference with her husband Bob on family farm transition. Their session sparked a discussion on the role of in-laws in farm meetings.

”Speaking as an in-law who also purchased some of the land (along with my husband) and as the bookkeeper-tax person for our operation, I would think a seat at the table would be good. I’d be willing to not speak, if that would improve the efficiency of the meeting(s). But excluding someone who, at minimum, is an important ‘detail-oriented person’ within the operation seems imprudent….”

“We, too, are in the process of forming an LLC for the purpose of facilitating more family member involvement and to keep the farm together as a unit, as the price/value of farmland has precluded the purchase of fractional segments of the family farm by descendants interested in retaining a connection to this family heritage…. How do we give a voice to the health concerns of the nurse-mother of the on-farm family who doesn’t wish to endure the risks of ‘chemical’- tolerating LLC members who see, accurately or not, profitability sacrifices from chemical-exclusive operating rules? How do we give a voice to one who wants to try introducing multi-crop rotations with cover-crop practices, if he/she is not a of “blood-line” family status? Is giving ‘weight’ to ‘blood’ family votes (count each as ‘two’) and ‘in-laws’ votes count as ‘one’ a solution?  How does that reflect values for spouses as contributing family members?”

“…[W]ith my own family of six siblings, if there were to have been discussions about the future of land, I would have resented that the spouses of my five siblings would have been part of the discussions. Perhaps that is because I am single, and instead of being one of six voices would have been one of 11….”

“If the in-laws are considered part of the family, why would they not be allowed to sit in on family discussions? This is overly simplified, but is really where resentment can breed. That is not to say they should have an equal voice or vote. That would totally depend on the operation and people involved.”

“With my family, as we transition the farm from my folks to me, my sisters are directly involved in many of the discussions. Their husbands are there, but usually refrain from voicing something unless it helps the discussion. So basically, they have a voice, but no vote. Both my mother and one of my sisters are trained in mediation, and we elect someone to chair the meetings. We even have an agenda printed up, so we can follow it and (try) to stay on track. The most important time to have EVERYBODY at the table was in the beginning.”

We then asked for advice from Business Advisor Rena Striegel, who is from a multi-generation farm family near What Cheer, Iowa, and now works at Transition Point Business Advisors in West Des Moines to offer her thoughts:

“At the end of the day, the family farm or business is just that – a business.  Despite the fact that the dynamics of a family-run operation can certainly be more complex than a non-family-run operation, it is important key stakeholders are included in discussions regarding continuity and succession.  Open, honest communication is key to a successful transition of the farm or business and most importantly to preserve family relationships.

“Succession and Continuity Plans are often confused with Estate Plans. The key differentiator is that Succession and Continuity Plans are developed and executed for the transition of management and leadership of the farm/business during life as well as at death, while the Estate Plan is strictly for the distribution of assets at death.  It is the dynamic aspect of succession planning that requires the input and expertise of all stakeholders in order to be successful.

“In-laws will be a part of the discussion whether they are in the room or not.  It is simply not possible to have discussions regarding succession planning without including them. The challenge with attempting to exclude them is that they will get information second-hand through their spouses, which can create feelings of mistrust, frustration and anger due to missing or inaccurate interpretation of information.  It is a far better strategy to include them from the beginning in order to avoid the negative repercussions of exclusion.

“Succession planning is a process – not a product.  It is often difficult to have discussions about the succession of the family farm/business even for families who work well together.  Long-standing family dynamics can often prevent family members from speaking openly about their feelings and wishes for the future.

“Many families find that using a professional facilitator experienced in succession planning will ensure that each stakeholder is heard and can provide options that take into consideration the wishes of the family leaders as well as the desires of the next generation.  The facilitator will also help to set expectations and boundaries regarding in-laws and their role in the discussion.  Often there are challenging dynamics between family and in-laws, which a professional facilitator can help the stakeholders to navigate.

“Although it is important for all stakeholders to have a voice in the discussion, it is critical for all participants to understand that only shareholders in the farm/business will have a vote.  Expectations should be clearly set in the initial discussions of succession planning so that the process can move forward and decisions can be made in a timely manner.

“The most important thing to remember: When everyone has a voice, the succession and continuity planning process will be richer, more comprehensive and can capitalize on the strengths and talents of the entire family.”