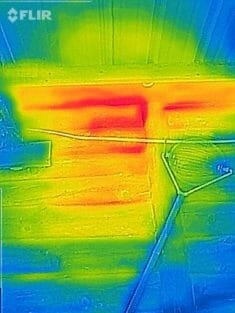 A nut picker leans against the side of the house at Red Fern Farm.

In January, I went home to SE Iowa and brought the thermal camera with me. Family friends Tom Wahl and Kathy Dice invited me over for dinner, and we took the chance to look around their house with the camera. See more of the photos we took below.

Tom and Kathy identified several places where installing more insulation would be helpful. One particular photo demonstrates that insulation doesn’t work well when free ranging geese pick it away from the foundation. Can you find which one that is?

They also wanted to see how much heat their windows were losing, and how effective reflective covers were at containing heat. You can see below that they are effective! 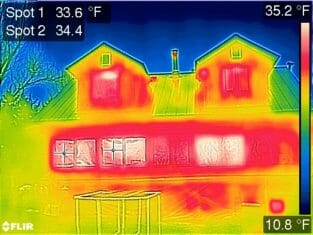 Photo taken right after Kathy pulled down the reflective blinds. The window still shows heat on the outside surface. 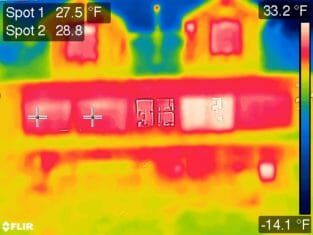 Photo taken two hours later. The temperature of the window has dropped at a rate faster than the rate of the house as a whole, indicating that less heat is escaping as a result of the reflective cover.

If you don’t know about Red Fern Farm, you should: Tom and Kathy were the 2015 recipients of PFI’s Sustainable Agriculture Achievement Award. To get an idea of some of the information they have shared over the years, check out this farminar  that Tom did back in 2010, primarily focusing on nut trees. It’s full of practical info.

After taking thermal images around the house, we had homemade pizza, porky grits, salad with fresh greens from their garden (yes, in January), and a dessert of persimmon chiffon (pretty sure their house is about the only place in Iowa you could get that).

For information on renting the thermal camera, please send me an email at nick@practicalfarmers.org.