Each year more farmers in Iowa and across the Cornbelt are trying cover crops. Many start with a cereal rye cover crop planted in the fall after corn or soybean harvest or others contract with a pilot to fly it over the standing cash crop around Labor Day. Good planter setup can be key to avoiding negative impacts on corn or soybean yields.

Mark Peterson near Stanton shared a picture of drilling soybeans in a tall rye cover crop. 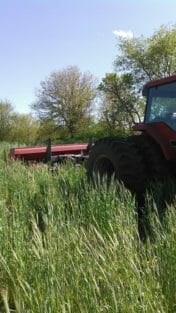 PFI member Fred Abels sparked a conversation on our pficovercrops email discussion list about the best recommendations for properly closing a seed trench when planting after a cover crop. Fred shared, “I had two farmers call me today asking me for a better way to close their seed trench for soybeans. Both farmers [who I spoke with] have a good stand of rye and are having problems planting into the thick stand. One had combo units (trash wheels and no-till coulter), the other was using a coulter cart with a three point planter. I told the farmer with the combo units to try setting them deeper, it sounded like his trash wheels weren’t moving much out of the way. The other farmer was running 2 coulters per row, he was setting them deeper.”

Don Lewis from Washington shared that they “have used 2 spaded closing wheels on the planter with drag chains for over 15 years. Even now in green rye, though usually in burned down rye have had no problem. Got rid of no till single coulter long ago. Just row cleaner.” 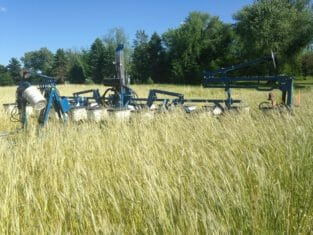 Jon Bakehouse from southwest Iowa said, “[I] just thought I’d share this photo I snapped today, planting beans into killed rye. I’m all for cover crops, but I have to admit this makes me a bit nervous. This particular location is right by the road and we have gotten a lot of “you can’t do that” comments. This picture is of soybeans planted into killed rye, some of which had blown down in the foreground. We have been no-till for almost 20 years and this is the first year we’ve planted into really, really thick cereal rye. It was seeded around 55 lbs/ac and I think all of it came up. Some of it is 5 or 6 feet tall and some of it has blown over, forming a really thick mulch mat. Here are my observations: Field conditions are noticeably wetter where we have cereal rye cover. Where there is no cover, field conditions are about right. 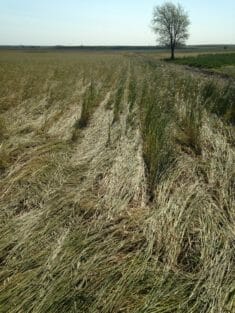 The trench closure in the rye is about 85-90% due to the extra moisture. I’m fairly confidant that even those beans will come up, especially if we get the next round of rain. We are planting about an inch deep, sometimes shallower when the row units ride up a bit on the downed rye. Again, field conditions are NOT ideal, and I am still on the fence if we should be out there at all. I’m hoping things improve as we go along, though 55 degree weather isn’t really expediting the process. For the record, we are running a stock 2014 Kinze 12-row Interplant (row unit boxes, so our weight is evenly distributed) one notch deeper than we run on just corn stalks. The down-pressure for both the gauge wheels and standard rubber closing wheels is the same for both conditions: medium on row unit, one notch from max on closing wheels, the latter of which I’m hoping to reduce as conditions improve. Also for the record, we took all of our no-till attachments off two years ago (coulters, trash whippers and spiked closing wheels) and have never looked back. As it turns out, all of those attachments were compensating (sometimes poorly) for other problems: inadequate chaff spreading, planter not set up right/worn openers, and probably most important, soil conditions not ideal. 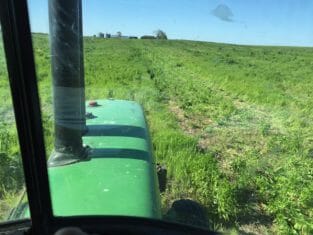 “It’s best to do your experimenting right along the highway as it serves for good coffee shop gossip and if something goes wrong it’ll be along the road when it does.

Here we are planting into ground that had some red clover and grass growing. 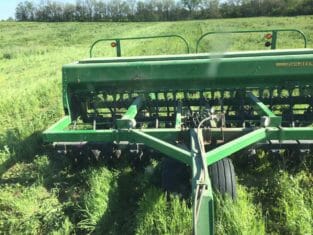 The controlled spill Drill was set a little light to boot…..so not thrilled about that but we’ll see. The beans are a WX7379N (3.7 GLY tolerant bean that bushes well). 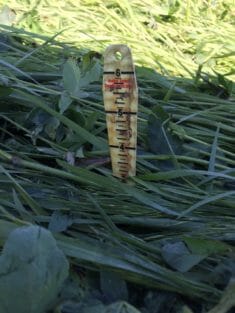 Stick is in the ground 1/2″. Not all areas that thick of residue. Ground was prevent plant last year. 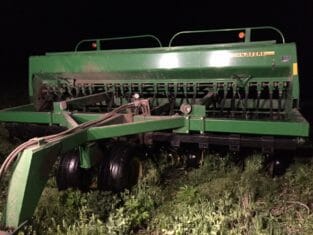 The belt for the spra-coupe pump came off while spraying the cover.  I walked to find the belt with no luck. Looked up the part number online and auto parts store cross referenced it to the wrong belt. So second trip I got several bigger sizes to get the right one via trial and error.  I wanted to spray Saturday before drilling but the wind didn’t cooperate so I sprayed Sunday and now I’m wondering if the mashed down cover will get as good as a kill as I’d like. We got a nice rain here Monday that would of been nicer if it would have waited a week to come so everyone could of got all their beans planted.