The farm in Jane Hamilton’s novel The Excellent Lombards has all the activity and diversity that makes many such places wonderful to visit—houses and barns, a forest and wetlands, sheep grazing on pasture, and an apple orchard that produces fruit of various tastes and textures. The main character, Mary Francis, and her brother and cousins are “the fourth generation born unto the operation, heirs to a historical property and a noble business,” as Mary Francis says. Although a young child, she alone of the farm’s four children wants to continue the operation (she’s a “womb farmer,” as a farmer friend calls such children). 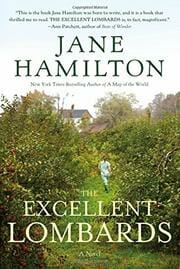 The future ownership of the land and business provides much of the tension for this story. An older aunt who lives on the farm owns a quarter of the farm, including a crucial right of way to the apple barn. Mary Francis’s father, Jim, and his cousin Sherwood, each own one-half of the rest of the land. Sherwood resents sharing ownership with his cousin; after all he was born on the land and Jim only joined the operation as a young adult.

Young Mary Francis feels the tensions about the farm’s future, but she doesn’t fully understand them. At age seven, the family is driving to the Twin Cities when she awakes, “a little damp, a little drooly,” to hear her parents arguing about whether Jim should will his land to Sherwood in case of his death, to “make it as easy as possible to keep the farm going.”

Mary Francis sobs, as it occurs to her for the first time that she will lose her father and perhaps a place working the orchard that her mother says “is the most important feature of the world” to Jim and to Mary Francis as well.

Jane Hamilton, who is married to an apple farmer, knows her stuff. She captures many of the questions surrounding farm transfer: Because of the circumstances of his birth, Is Sherwood really “entitled” to a larger share of the farm? What do in-laws deserve? After all, Mary Francis’s mother puts her own money and efforts into the farm, but is marginalized in the decision-making. What level of ownership will be fair to Mary Francis if she’s the only heir committed to laboring on the farm while the others make their mark elsewhere? A distant relative joins the farming operation—is he an interloper, as Mary Francis thinks, or key to the farm’s future because of his farming savvy and commitment?

Legacy decisions are delicate matters in most families; farm business transitions are often even harder. The land can be 90 percent of a farm business’s assets; how do you keep a farm going and provide for non-farming heirs as well? The land often has nostalgic and historical significance (sometimes baggage) with it, bringing out strong emotions that unfortunately too often divide family members permanently.

In farm country today, these questions are on everyone’s mind, including children. In this novel, Mary Francis’s concerns for the orchard’s future are only exacerbated by the fact that the farm is in a rapidly urbanizing area. “What if soon we were unable to pay the taxes on the four hundred acres?” she thinks. “What if a multimillionaire bought the woods, the houses, razing the apple trees for piano key subdivisions? … I wouldn’t think of it, would not imagine the classic and lugubrious farm auction scene turning into our real and saddest of memories, the closing of the door for the last time, getting into the car, turning back to look.”

Companies and nonprofit organizations are working on creative efforts – such as creative farmer-non-farmer financial partnerships — to make sure the farmland transition results in treasured direct-market farms continuing and new ones getting a start. Right now, the odds are stacked against farms like the Lombards’. That’s a shame, as the farmers who feed us make Iowa a better place.