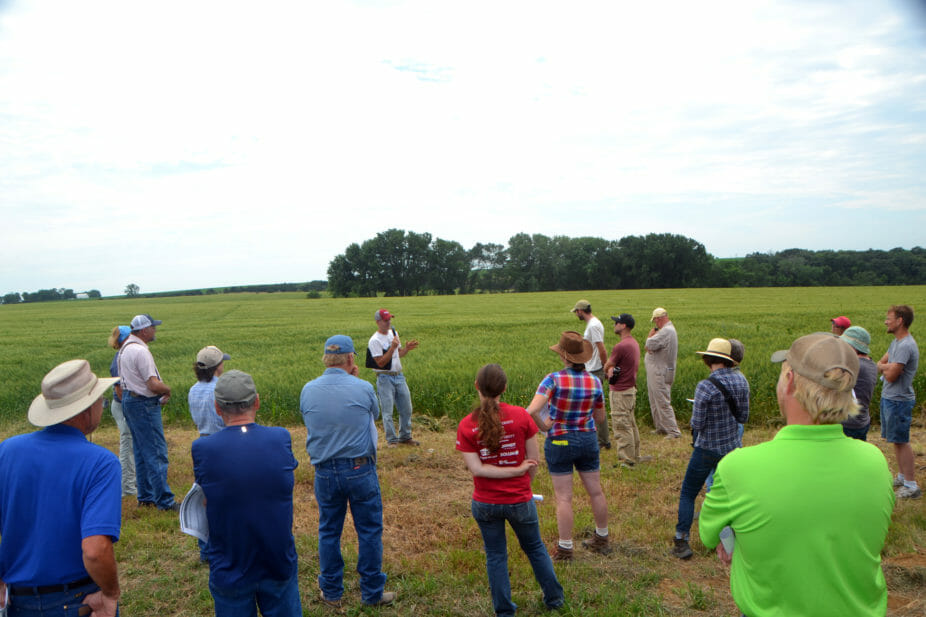 Nathan and Sarah Anderson welcomed field day attendees to their farm on Saturday, June 25 to learn about rotational grazing, pasture improvement, cover crops, small grains and to eat some fantastic smoked brisket raised on their farm. Nathan kicked off the field day by introducing the farm and having all the field day attendees introduce themselves and tell him a couple things they’d like to learn. 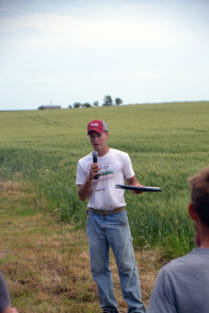 The first stop was what is perhaps the largest wheat field in Iowa (?) at 55 acres. Nathan talked in the wheat field first about why he decided to grow small grains, and then moved into some of the more practical aspects of growing wheat. Here’s a summary: 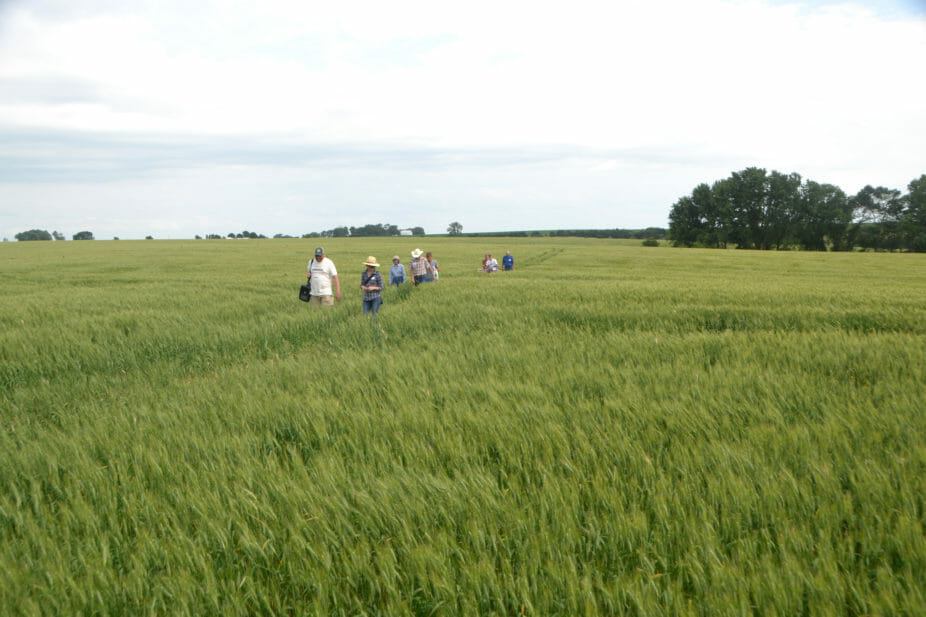 Growing small grains, such as wheat, allows Nathan to plant a multi-species mix in late summer that his cattle can graze late into the fall.

After detailing the why of small grains production, he moved on to the how. Here’s a snapshot of Nathan’s management up until this point in the year:

Variety: Prevail – a hard red spring wheat developed in South Dakota. Prevail is a shorter variety, which Nathan says is important in the windy conditions on his farm — taller varieties may be prone to lodging.

Seeded: April 12 with an air seeder at 120 lbs/ac, vertical tilled into soybean stubble.

Herbicide: None. He intended to use Aim EC, but was too late, he needed to have sprayed before jointing. Husky was a post-jointing option, but had carry-over restrictions and grazing restrictions, so he opted not to spray.

Micronutrient Application: Applied micronutrient mix of calcium, copper and sulfur after pollination to help with diseases.

Market: He is aiming for food grade market, and has sold to Scoular in Blair, NE in the past. 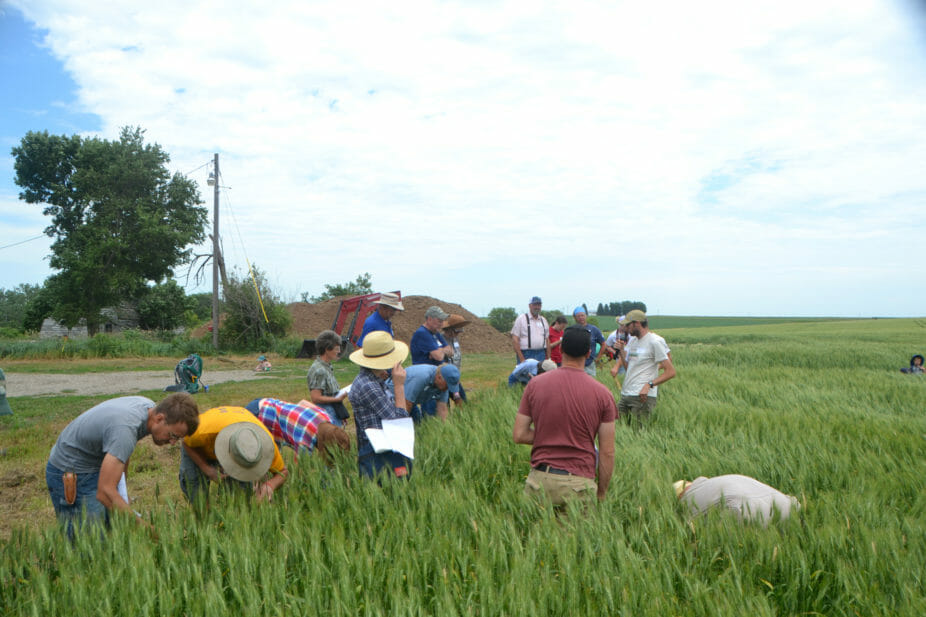 David Weisberger of Iowa State University instructs the crowd to look for wheat tillers at the base of the plants.

David Weisberger of Iowa State University spoke on some of the specifics of wheat production. He said before you plant anything, you should determine what market you’re shooting for: “Every decision you make should be based on the end use of the crop.” He emphasized two important factors in wheat production: seeding rate/plant populations and seed bed fitness. “A reliable bet, year to year, is to think about a target plant population. Know your rate in number of seeds, not just number of pounds. The number of seeds in a pound can vary significantly year to year,” he says. He says that can be determined pretty easily each year, by counting out a thousand seeds and using a seeding rate calculator to determine seeding rate, such as this calculator available on the PFI website.

The next thing to think about at planting time is seed bed fitness. David says that a firm seed bed is important to ensure good seed-to-soil contact, and uniform seeding depth. “We’re raising a population, not a collection of individuals, so we want all those plants coming up at the same time,” he says.

“If you’re thinking about inputs, you’re going to need to know about how and when small grains grow,” he says.  He says that weed, disease and fertility management are all dependent on growth stages, so  economic applications of various inputs depends on an understanding of those growth stages. You can find an easy to use Guide to Staging Small Grains on the PFI website. 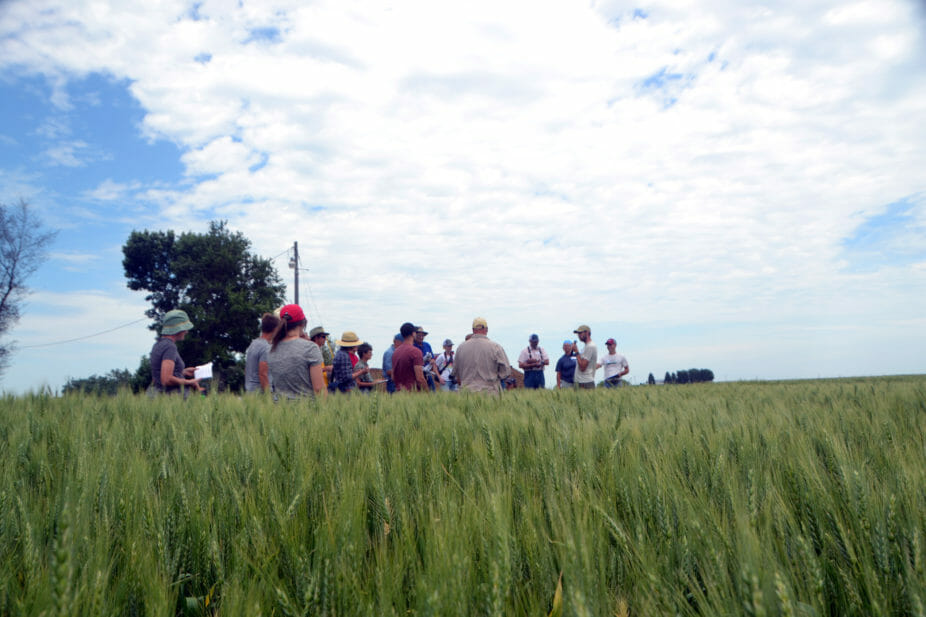 For more information on wheat production, and other small grains, visit practicalfarmers.org/small-grains.

The final small grains topic that Nathan hit was grazing a multispecies cover crop mix after the small grains harvest.

He again referred to Matt Liebman’s research: “One of the assumptions of the system that Matt studies is that livestock eat the crops and then you spread the manure on the field. But that’s a lot of handling of bulk products,” he says, “I think we can do one better with an integrated crop and livestock farm. The cows do the consuming of forage and the returning of the manure on the spot. If nothing else, that’ll sure make my life easier.” 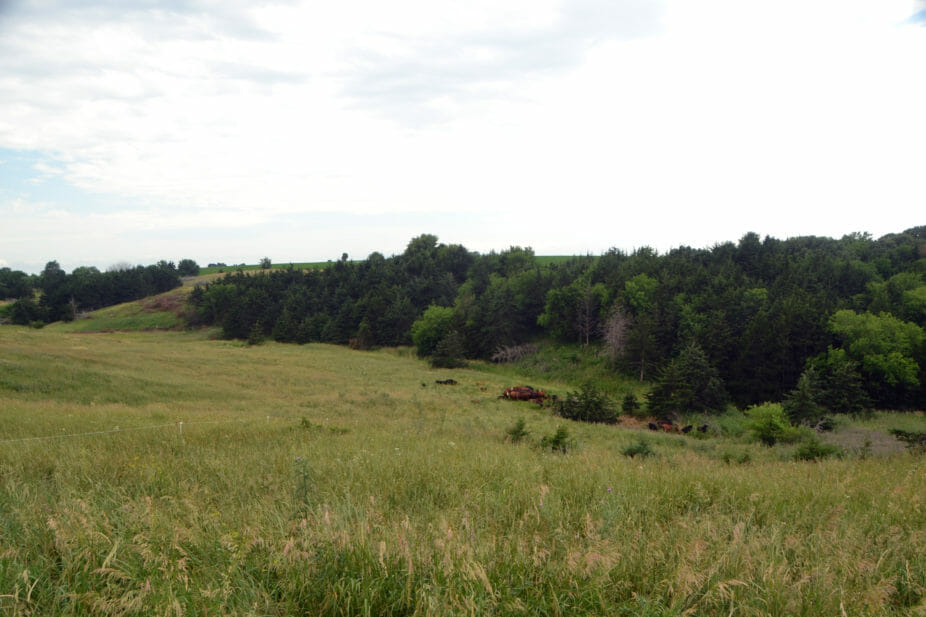 Nathan first started planting cover crops in 2012, when he aerially seeded winter rye. He says that rye is pretty tough to beat, and it provides some good spring grazing for his cattle, but there’s usually not enough fall growth for grazing.

“We’re looking to fill that gap in forage in the fall by planting cover crops after the small grains harvest. That way, we can capture some of that summer heat and graze it late into the fall,” he says. He says that he likes to get at least six species in that mix, if not more: a warm season and a cool season grass, a warm season and cool season legume, and a couple brassica species.

After talking small grains, Nathan led the crowd through the wheat field to see some of the pastures that he’s been working on improving via rotational grazing, cedar tree removal and interseeding legumes for many years. 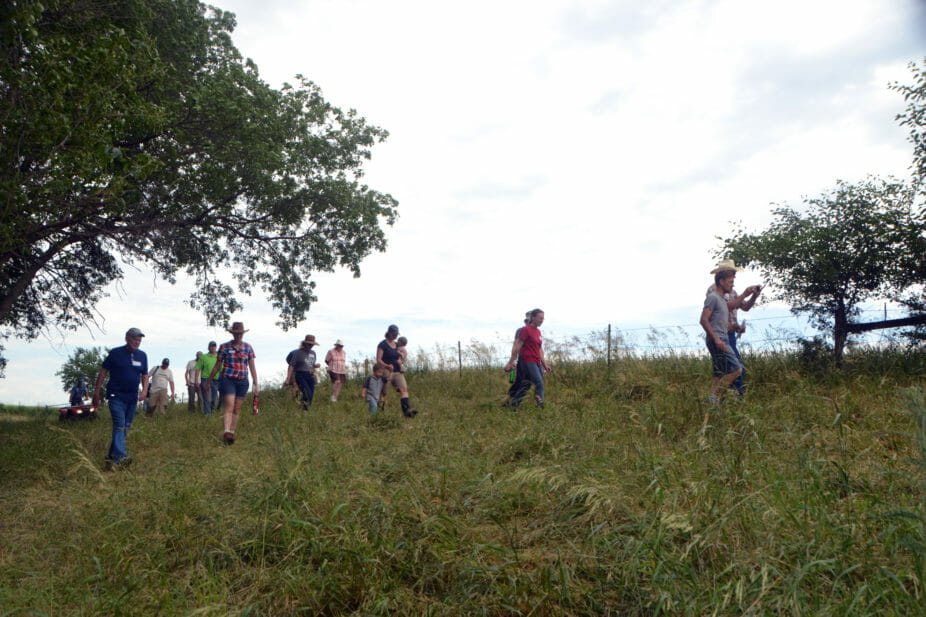 A few key takeaways from Nathan’s talk on grazing. 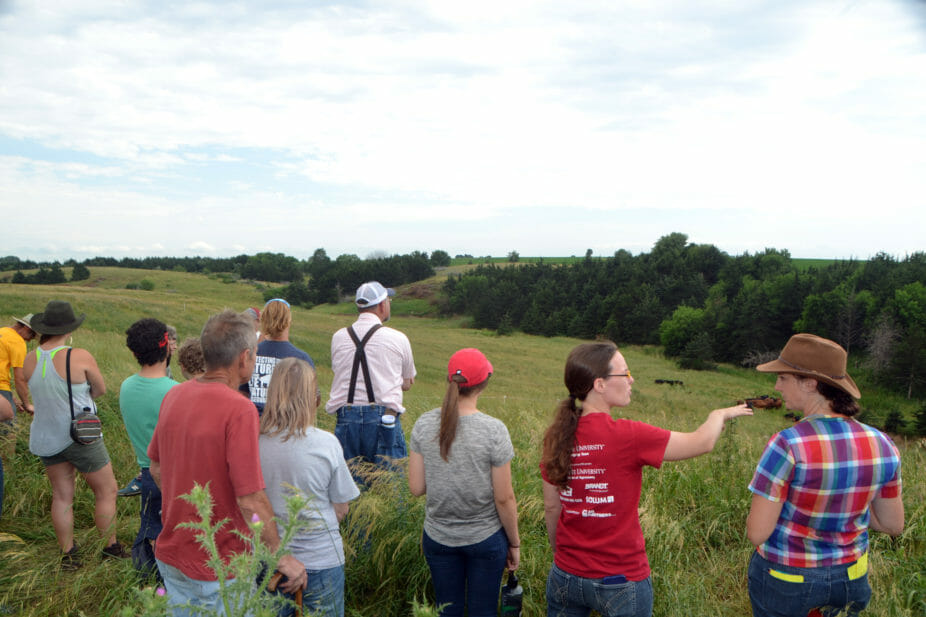 The crowd checks out Nathan’s cattle and examines two weeds that he constantly deals with: Canada thistle (in the foreground) and Eastern Red Cedar (in the background). 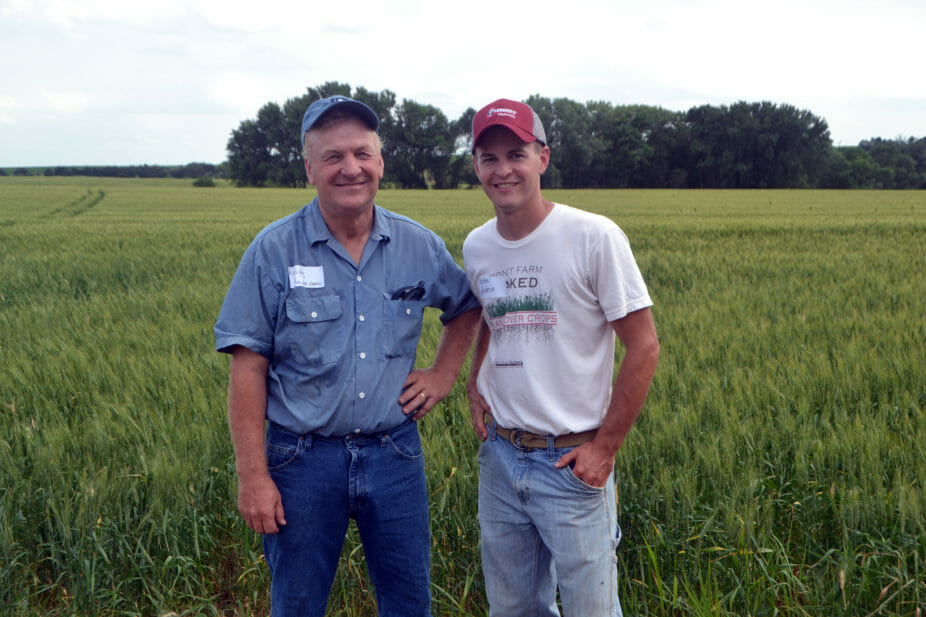 Nathan and his dad Randy. Nathan thanked his dad throughout the field day for the opportunity to farm the family land and to try new things, even if the two don’t always agree.

The field day concluded with a BBQ that included some delicious smoked brisket from Nathan’s cattle. PFI would like to thank the sponsors for Nathan and Sarah’s field day: Cherokee County Soil and Water Conservation District, Green Cover Seed and Super D Ag. 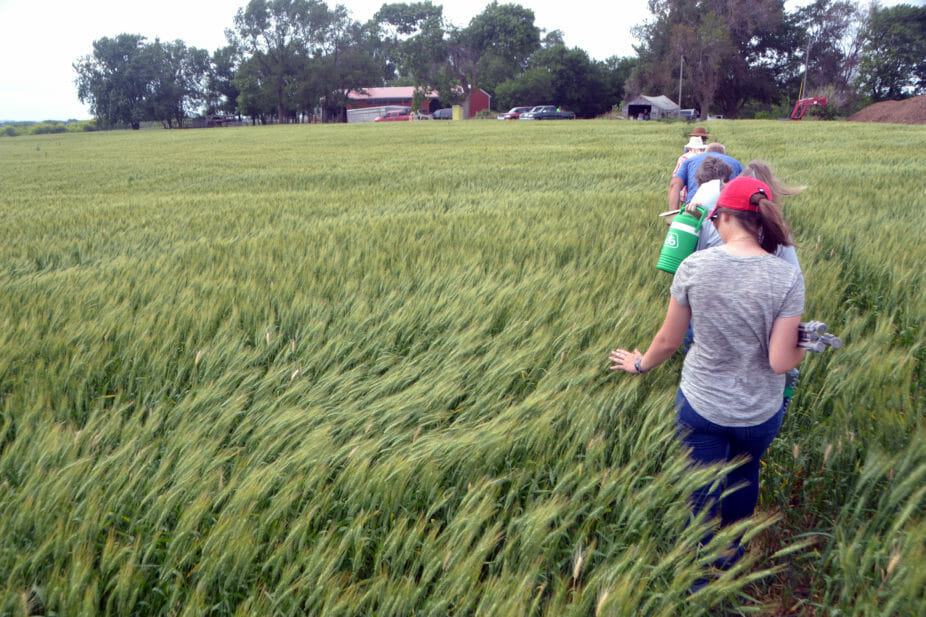 Field day attendees return from the pasture through the soon-to-be amber waves of grain.