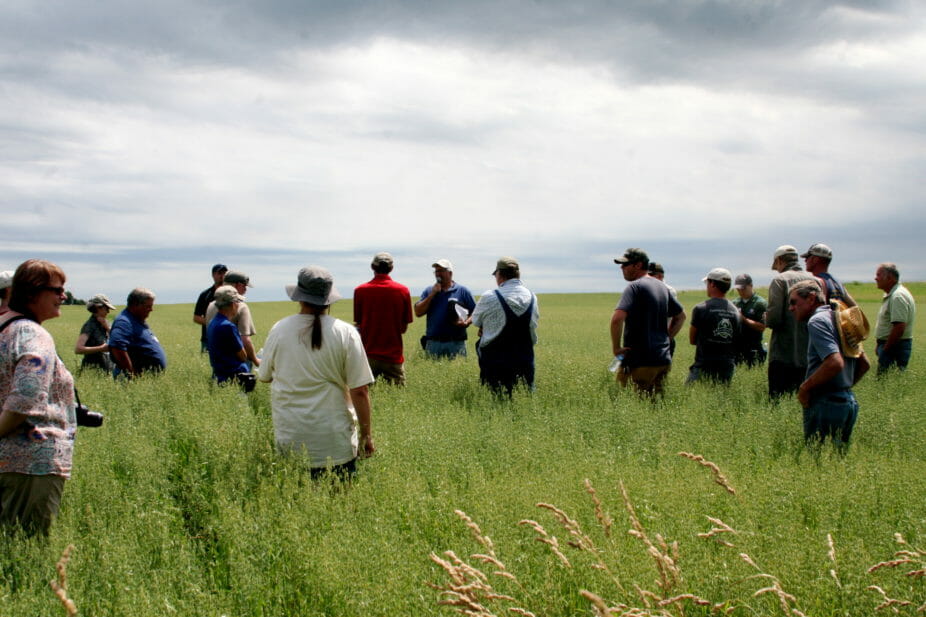 Aaron addresses field day attendants in one of his organic oat fields during a field day on June 20, 2016.

Over 80 people gathered at the farm of Aaron and Nicole Heley-Lehman on June 20, 2016 to learn about the production and benefits of growing small grains in an organic crop rotation. The field day was held on the original farm that the Lehmans settled on, five generations ago. The farm was once much more diversified: “Dad had the highest producing brown swiss herd in the state for many years,” he says.  “But the farm has changed a lot over the years: by the time I was growing up, it was largely a grain farm.”

About 10 years ago, the Lehmans planted their first field of organic crops. Since then, they’ve transitioned a new field every year or two. “When we started to convert our fields into some organic acres, the guys who converted all of their farm into organic at one time said they barely lived to tell the tale,” Aaron says, “So we chose not to do that. We chose just to go field by field.”

The Lehmans chose to move towards organic for a number of reasons. First of all, he says, they identify with the systematic approach to farming that’s necessary to produce crops without herbicides and commercial fertilizers, and they also feel strongly about the tenets of organic agriculture. In addition, there are economic advantages of growing a premium crop.

Aaron says there was certainly a learning curve to going organic, but it wasn’t all new. “We knew that we would be tackling some new and different ways of doing things,” he says, “but lots of those things had been used on the farm many years ago.” Bringing a small grains crop back to the rotation is perhaps the most important of those tools. 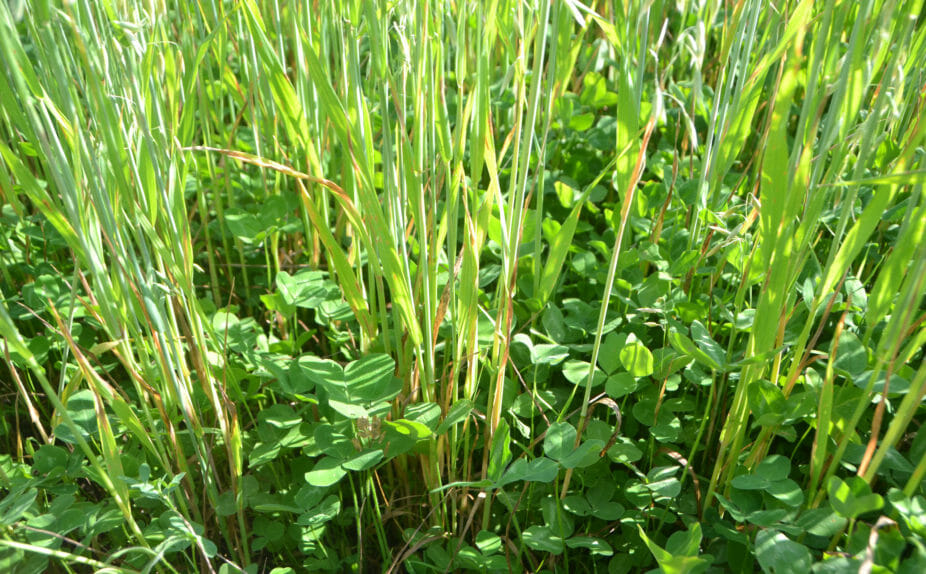 Red clover grows underneath oats on the Lehman farm. After oat harvest, the clover will continue to grow, and provide a source of nitrogen to the following year’s corn crop.

Now, the most common rotation on the Lehman farm is the three year rotation. Corn, then soybeans, then oats with an underseeding of red clover, which is used as a green manure crop to provide fertility for the corn.

One of the biggest challenges for Aaron over the past few years has been getting his oats planted early enough. That creates problems in oats production for a number of reasons. “If you don’t have your oats seeded early enough, what happens? In addition to not having a full season of growth, especially in our organic fields, the weed pressure tends to be a little bit too heavy. Having the oats in nice and early tends to suppress the weeds quite a bit better,” he says. 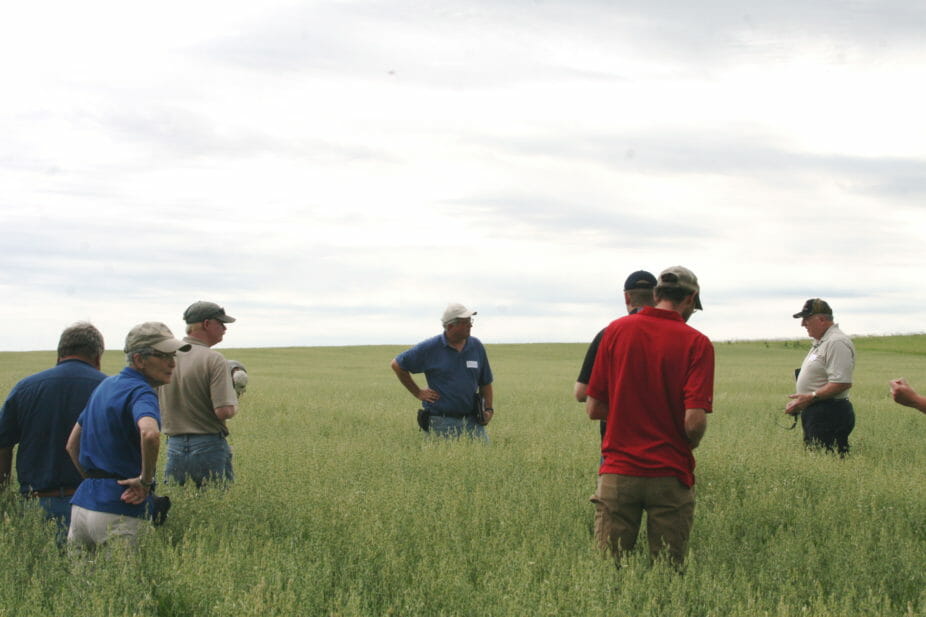 Bruce Roskens of Grain Millers and David Weisberger of ISU both re-emphasized this: oats are cool season crops, and need cool weather during grain filling for good yields and test weights. The longer you wait to plant oats, the shorter that window for grain ripening becomes.

Bruce also says that part of the reason that oats make such a good nurse crop for clover or alfalfa is that they have broader leaves than other small grains, and can shade out weeds. But that means that the oats have to have a head start.  Matt Liebman of ISU explains: “It’s very important to start out with a weed-free seed bed in an organic oat field. There are a number of weeds that are quite tolerant of cold soil conditions — lambs quarters and giant ragweed most prominent among them — and if those weeds have a head start, you’ll know it at harvest time. They’ll be thick and they’ll  be making your life harvesting much more difficult than you wish it were.”

Matt adds that seed bed preparation is important for a number of reasons: “A firm seedbed is really important for rapid emergence. You don’t want a lot of air in there. I like to see a cultipacker run over the field before we plant oats in our experiments. This allows for a level surface, and much more even seed placement. You get much more even emergence of the oat crop,” he says.

David Weisberger, along with other researchers at ISU, has been working on a project to identify constraints to the profitability of organic small grains in Iowa. He started with a large observational study, where they visited 40 farms (many of them PFI farms) and recorded a lot of data: plant counts, seeding rates, fertility, biophysical data, soils data, and he has identified several places that Iowa farmers could improve their oat profitability. 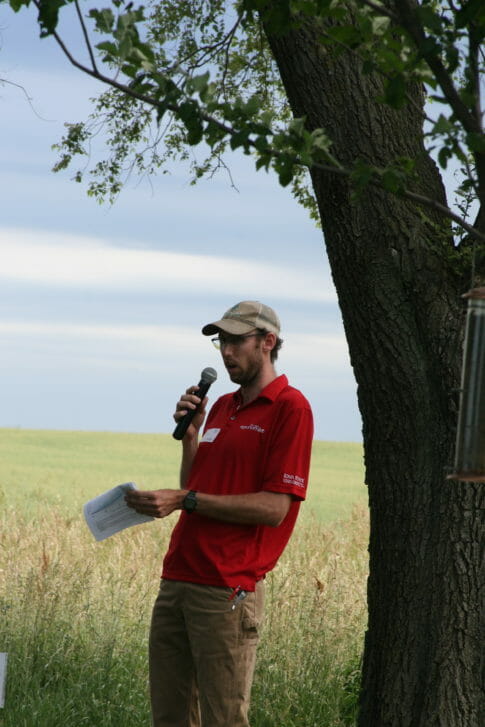 David Weisberger of Iowa State University talked about the management constraints to organic oat production in Iowa, and identified some of the ways to overcome them.

“One big glaring thing that stood out for us was seeding rate,” he says. In Iowa, we think about populations for our corn and soybeans, he says, and in most areas of the world where small grains are grown profitably, they target populations in their small grains as well. He says that based on his survey, seeding rate varied dramatically across the state. “It varied from 1.5 bu/ac on the low end to  5 bu/ac on the high end,” he says. To identify a more precise seeding rate, David recommends using a calculator available on the PFI website.

As part of the research, he conducted several focus groups, hoping to identify some research that could answer some of these questions. Aaron attended one of the focus groups, and he and David decided to conduct a trial on his farm in 2015 to look at three different seeding rates.

You can see the results of Aaron and David’s oat population trial here:

Oats are harvested one of two ways on commercial farms. The older way is to use a swather, which cuts the oats into windrows, where they lay to dry. After a few days of drying, the oats are combined with a pick-up head. The other method is to combine the oats while they are still standing with a small grains head or a modified soybean head. “In the past,” Aaron says, “we haven’t had the option of windrowing and using a pick-up head on our combine for oats, we’ve always taken them standing. But last year, we needed a pick up head and swather and we didn’t have it.”

Lots of his oats lodged, or fell down, last year and it created significant problems for harvesting. “It’s not a very pleasant task trying to combine your oats in that situation,” he says, “you’re not treating your combine very well by sending that green material through it. And even if you are able to send a little green material through it, you’re still not picking up nearly what you think you should. I would estimate that what I was able to harvest was probably 60% of what we were able to harvest in the areas of the field that were standing ok.”

Aaron says that swathing will allow him to let the oats and other green material dry down more before running it through his combine. 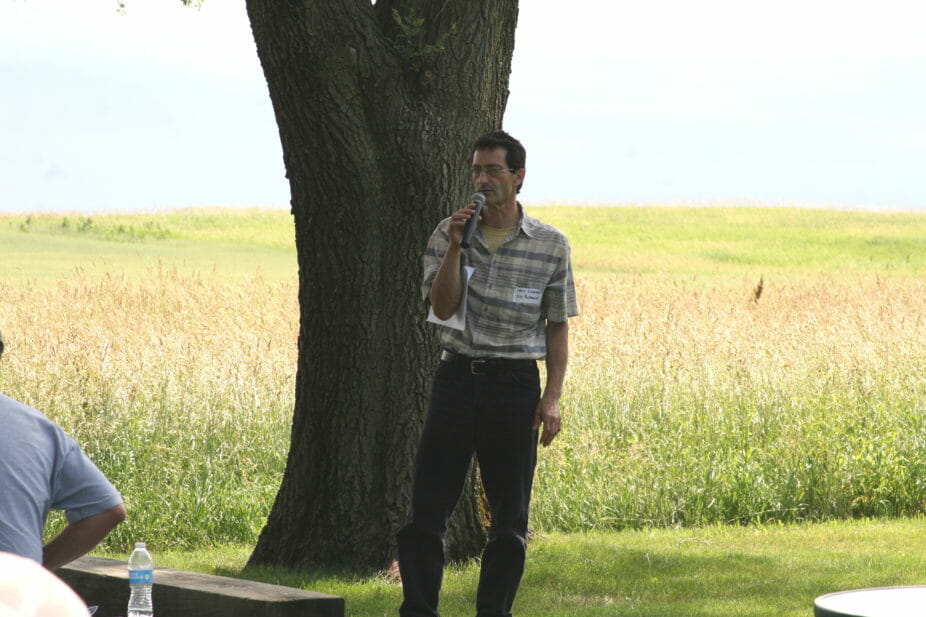 Matt Liebman, who spoke at the field day, shared some of the results of a study he has been conducting at ISU’s Marsden Farm south of Boone for the last 15 years comparing three systems: a two-year rotation of corn and soybeans; a three-year rotation of corn, soybeans, and oats with an underseeding of red clover; and a four-year rotation of corn, soybeans, oats with an underseeding of alfalfa, followed by a year of alfalfa. By comparing these systems, he’s sought to answer this question: how does diversity in an cropping system affect agronomic, environmental and economic performance? Through various papers over the last decade, he’s shown that diverse rotations improve yield, reduce weed and disease pressure, improve soil quality, improve water quality, decrease fertilizer and pesticide use, and decrease fossil fuel use, all while maintaining the same level of profitability.

Matt says he designed this trial based on the integrated crop and livestock farm of the late PFI founder Dick Thompson. “When I first came to Iowa in the late 90s, I spent a summer riding in the tractor with Dick, and getting as much information from him about the specific practices that he would use,” he says.

To read about more of the benefits of diverse crop rotations, see our infographic, based largely on Matt’s research.

After talks and tours of the oat fields, Aaron took the crowd for a tour of a portion of their farm that is enrolled in the Conservation Reserve Program (CRP). “We think conservation is just the best thing for the land,” Aaron says, referring not only to the environmental benefits of their diverse crop rotation and CRP field, but also grass waterways, cover crops, a wetland, and pollinator strips, “and in turn, we think that’s what’s best for our community.” 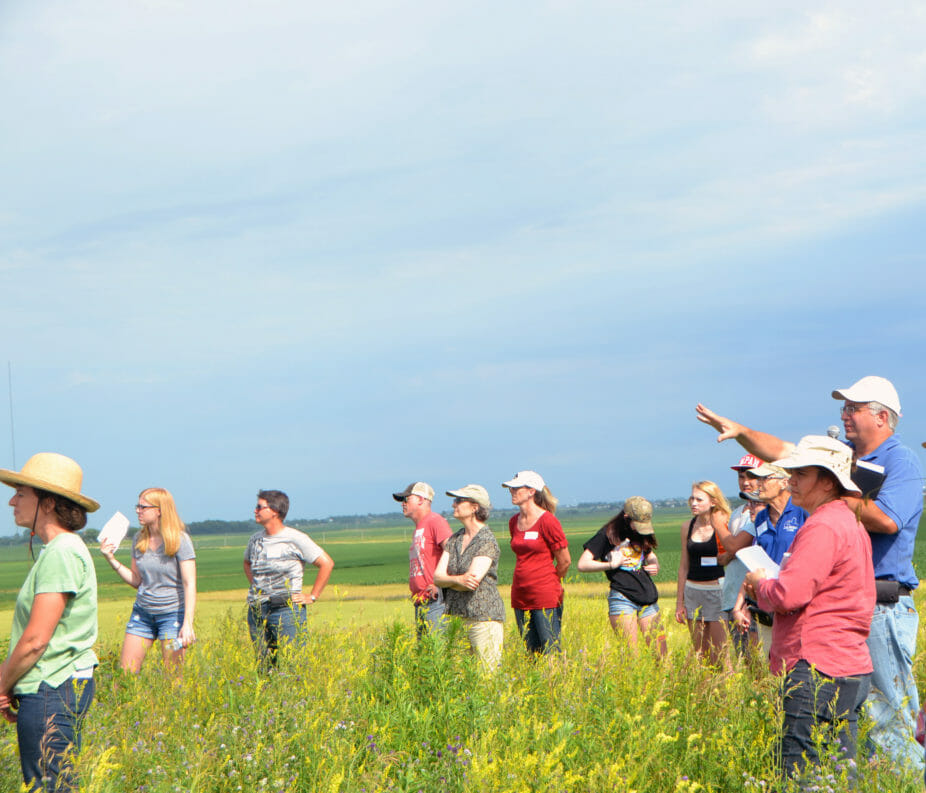 Aaron points out the view from a prairie-covered knob on the family farm.

After the walk, everyone headed in to eat a delicious meal, made almost entirely from ingredients sourced not only locally, but from fellow PFI members. 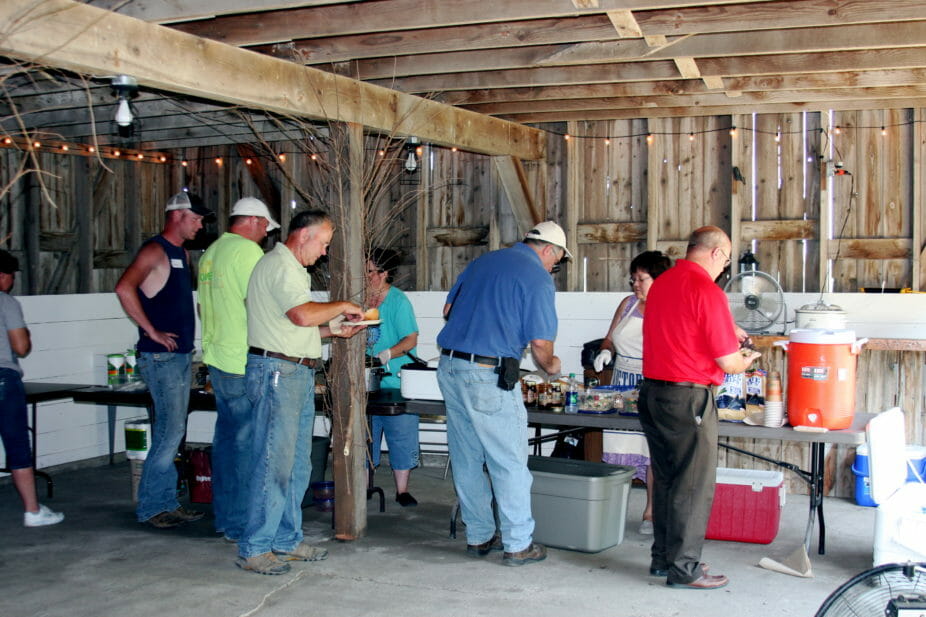 During the meal, Iowa Farmers Union President Jana Linderman spoke about the need to support policies that help farmers put sustainable agricultural practices in place on their farms. 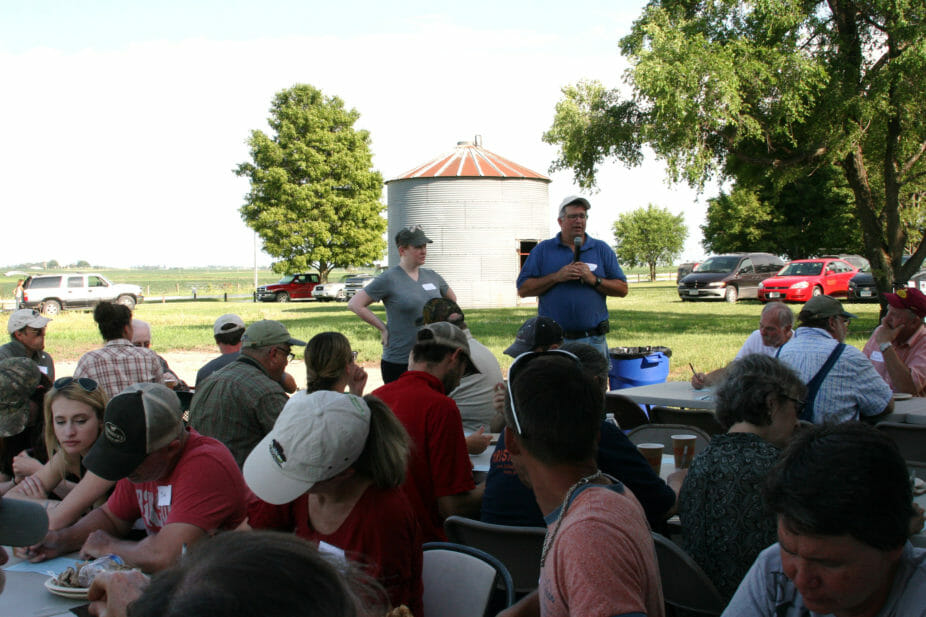 Make sure to check out other upcoming field days where you can learn more about small grains. The next one is on Saturday, June 25 at Bobolink Prairie Farms.

Thanks to all the sponsors for the 2016 Field Day Season! 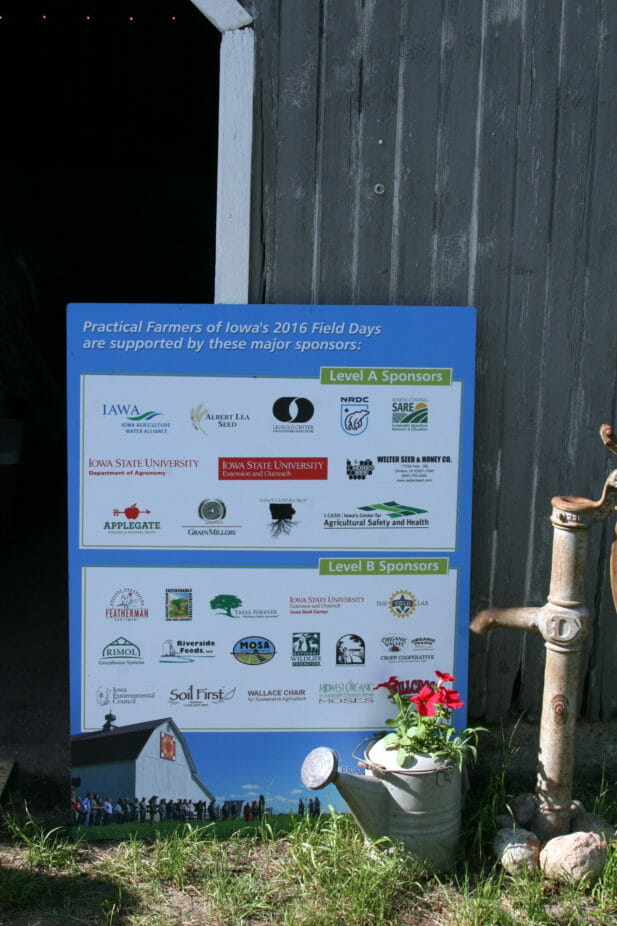