Is an oat cover crop the market we need to diversify the landscape? 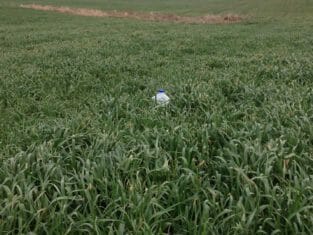 Growing third crops in Iowa is of interest to many farmers but lack of obvious markets can reduce farmers’ enthusiasm about these soil building crops. Cover Croppers are using spring small grains, like oats, as fall cover crops sometimes mixed with cereal rye. Spring small grains seeded in the fall prior to September 20th in central Iowa can provide a lush, green burst of cover crop at harvest. Cattlemen like oats mixed with cereal rye to get some fall grazing too. But Cover Croppers comment that oats can be “finicky” and more delicate to establish than cereal rye. I asked the PFI Cover Crops discussion list what observations they had from aerial seeding or early fall direct seeding spring small grains like oats as cover crops. Could a new potential oat market be right in front of us or are oats to inconsistent for Cover Croppers to want to use? For example if oats were seeded as part of a cover crop mix on 10 million acres (the number of acres needed to meet Iowa’s Nutrient Reduction Strategy goals) we’d need about 125,000 acres to grow that seed. If cereal rye was a part of that mix we’d need about 285,000 acres to grow that seed. Total small grain acres in Iowa today is 100,000 and of that 55,000 is oats.

—If the oats are not incorporated, they may need a couple of shots of rain to get going. One good rainfall event is enough for germination, but if they are exposed to the sun for very long (leaf drop is inconsistent), or the soil moisture is low, it won’t be enough to keep them alive. Had that happen in ’14 to me; lots of bare spots at harvest. I’m also looking at doing 1bu oats with 2bu rye in the fall this year. Could be good, could be bad. Long time till then!

—I had flown on something like that [oats+rye] into corn that was rotating to soybeans the following year.  The seed survived lying on the ground for a month, and I was able to harvest the corn just before a good rain in mid October.  With all the residue protecting the seedlings from drying out, yet able to get sunlight right away, it worked out.  Lucky, I’m sure, but it made me wonder if blowing cover crop seeds under the corn head as we harvest would work most years.  No seed to soil contact, though, so I just have not invested in the idea. I used to blow soybeans in with a Hiniker cultivator, so I would mount a seed spreader like that under each snout (pointed forward onto “bare” earth) and run the hoses back along the feeder house to a Gandy somewhere on the combine.  GPS driven electric drives maybe.

—In my experience with aerial seeding, I’d much prefer to see spring barley used over oats. The spring barley will give a nice green up in the fall and seems to tolerate the lack of seed to soil contact better than oats. My cows don’t seem to care if they’re eating barley or oats. The seed cost per pound is similar, but there are more barley seeds in a pound so I can use a bit lower rate. Pilots also appreciate having a seed mix that spreads evenly and uses more dense seed. Oats fall short in both of those categories. If the overseeding is done by a Hagie-type ground rig, I’d be less concerned about the spreading and seed density.

Tom Kaspar from ARS who has researched cover crops in Iowa for several decades made these comments.

—I did most of my trials with an oat-rye mix very early in my days of working with cover crops when we were still novices and we would undoubtedly be more successful today.  That being said I am not sure that we have oats as a cover crop or the oat-rye mixture completely figured out.  But I will give you some thoughts.