It Takes a Village to Raise a Beginning Farmer

Aaron White and his wife Dana returned back to Iowa in 2012 to pursue their hand in farming. With both of them growing up around farming, this sounded like a viable option. As Aaron dug into planning and then started putting that planning to the ground, he found that it required more than him and his family to make it happen. As a Practical Farmers of Iowa member he didn’t hesitate to use the resources that were offered to him as both a member and a beginning farmer. In a recent visit with Aaron on his farm, I learned that he couldn’t have done this without some great resources and people by his side. 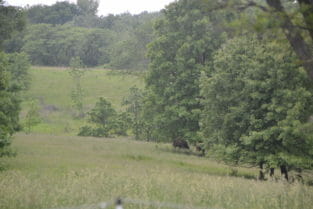 In searching for some land Aaron logged into the Find a Farmer website and set up an account to find somewhere
to start their new venture. A couple options where available to him, one being out of state and the other located within miles of Dana‘s family farm. So he reached out to Robert Fleming of Carlisle, who had some prairie restoration ground that was available for grazing. Rob knew that animals would need to be part of the cycle in this prairie restoration, but needed someone who could do this. Rob and his wife live out of state and are able to come back to the farm only limited times throughout the year, so managing livestock was not a viable option. Together Rob and Aaron worked out a grazing plan to ensure both of them could reach their goals each year. Aaron is grateful that Rob offers a fee schedule that was based on a price per head per day. This allows him the flexibility and peace of mind to graze as it fit his operation and the land. “When you are paying a flat price per acre you are trying to maximize those dollars to the extent that you risk over-grazing. Having this fee structure eliminates that fear.” Both Aaron and Rob value the land and take great care to ensure it is managed to the best of their abilities.

Having the ability to farm with Aaron’s father-in-law has helped him see that networking in your community is critical when starting to farm. Most land doesn’t just come available and get listed like homes for sale do, they are sold to neighbors, family and friends, in hand shake deals many times. Finding the right landlord can be tricky, but when the community knows you and you know them it can make this process much smoother. Another place that Aaron has found networking helpful is in the e-mail discussion list offered to PFI members. When Aaron’s only bull went down with a bad leg right at the beginning of the breeding season he had a panic moment. “What do I do now” he thought to himself, “buying a new bull isn’t in the budget, but the cows need to be bred”. So he turned to the livestock discussion list and reached out to the PFI community for some advice. Here is where he found Bruce Carney of Mingo. Bruce offered to rent Aaron a bull for the season to give him some time to build up his bull herd. Aaron now has three bulls to pair with his 24 cow/heifer pairs. 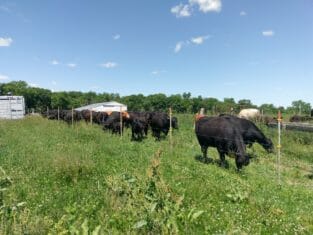 When looking at finances Aaron is not afraid to go after the resources available to beginning farmers. When approaching landlords about renting additional crop ground he tries to set himself apart from other farmers using the Beginning Farmer Tax Credits. This allows the landlord to take additional tax credits when they lease to a beginning farmer. This can be helpful to set you apart when you are not in the position to pay as much as an experienced neighboring farmer. While attempting to purchase a nearby farm, Aaron reached out to his local Farm Service Agency office and started the process of obtaining a FSA Beginning Farmer Loan. Unfortunately the land deal didn’t happen, but Aaron learned the process so he is ready when the next purchasing opportunity comes about.

Another place Aaron turned to was the Farmer Veterans Coalition after his service in the Marines. He applied for the Farmer Veteran Fellowship Grant, which provides direct assistance to veterans in their beginning years of farming. He used the funds to purchase a hay trailer, a bull and some continuous fence for his bull pen. He was also able to travel to Washington DC with other veterans to represent and advocate for all veterans entering agriculture. 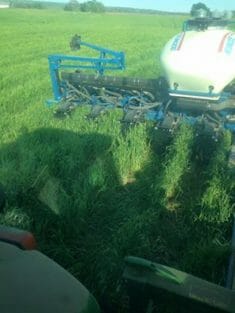 Keeping conservation in mind is highly valued by Aaron. Cover crops are something unconventional to his father-in-law, but Aaron sees the value in adding this cover and they are working together to make it happen. Last fall Aaron reached out to the local Natural Resources Conservation Service agent to seek support in adding cover crops to their rotation. Through some financial assistance from NRCS, he was able to add some green cover to their neighboring soybean field with the intent of using it as a fall grazing cover.

With all of these contacts and resources Aaron is well on his way farming. This is a life he appreciates and values as he shares it with his family and gets to see his own kids find joy in farming as he did as a boy. This fall he is looking at applying for the Savings Incentive Program to further fine tune his business skills and connections through the PFI network. You too can take advantage of these and many more resources for beginning farmers. Let us know how we can help.