Who’s Entitled to the Land?

“That is MY money taking care of Dad in the care center.”

New Hampton farmer and farm transfer leader Irene Frantzen has heard offspring who will likely inherit farms make comments like this, and she strongly disagrees. According to Irene, “The brutal truth is that money is the parents’. You might inherit it someday, but it is not your money. The cost of long-term care is a brutal truth, and all that money may be needed to help with the care of the parents.”*

Whose money is it anyway? We asked PFI members to weigh in. Here are some of their comments: 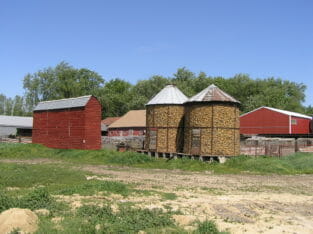 “There are some children my age (late 20s, mid 30s) who believe they should have a say in how Dad and Mom handle their affairs. I have a sibling who thinks that because our Dad and his siblings own the farm, he owns it too. I agree that it’s Dad and Mom’s money and land to do with as they see fit or use if needed for long-term care. I am a young farmer still figuring out my path. I currently rent half of my family farm and hope/plan to have a portion passed down to me someday. However, I also known there is always a chance none may be left when the generation changes again. There is no guarantee. I am thankful for the opportunity to farm what is available, and will continue working towards owning my own farm someday. Not sure when that ‘someday’ will arrive, but by no means am I expecting a guaranteed inheritance from Mom and Dad simply because I am their son.”

“I occasionally hear members of the older generation — not necessarily farmers — say things like ‘We are spending the kids’ inheritance on X.’ They say it in a joking manner, perhaps to their friends. But I think it’s unfortunate when ‘the kids’ hear this and find themselves feeling deprived because of what is now NOT coming their way. Such attitudes seem to me to be more prevalent today than they were previously, at least in this country. But they are poisonous, and not just to that family, but to society in general. How sad that the child Irene referred to would rather focus on what he may not receive of his parents’ financial resources rather than concentrate on what he has already received from them: life, love, lessons, etc.”

“Every situation is different. A lot depends on the heritage and culture of a family and what the parents set up as expectations for their offspring. Good communications and consistency are important. I did realize that the land my parents owned was theirs and that they could do as the wished with it. I am grateful, though, that they were pretty much consistent, and there were few surprises when their estates were settled. From early on, we siblings knew that our parents intended to pass along their land to us, so that set up expectations. And later in life, my parents would speak with us on occasion about land transference issues with the intent of distributing their wealth in an equitable manner.”

“I wish I didn’t have an example of people in my parents’ generation only thinking about and waiting for inheritances from their parents. On my father’s side, two ‘older’ generation family members allowed their mother and aunt to live in unfit conditions to not spend potential future inheritance. However on my mother’s side, it was the opposite and as much money needed was spent to properly care for my grandmother with Alzheimer’s until she passed away over a year ago.

“In my own situation, I’m not assuming any inheritance. It’s up to my husband and me to position ourselves with enough savings/net worth/retirement income to live comfortably and afford our lifestyle. As an only child and the probable Power of Attorney on my mother’s estate, I’ve already been coached on her intentions, which I will follow.”

“There is much more involved in relationships between farm parents and offspring than just the transfer of land. There is the matter of love and lessons. To inherit land is nice. To grow up feeling loved and having learned important lessons is wonderful–a blessing.

“I believe there are parents who help their offspring learn to be resourceful and achieve in ways that the offspring are not dependent on some day inheriting land. Like letting a child know they are loved, valuable, and capable of achieving–and helping a child develop attitudes such as a good work ethic, the capability of working well with others, resiliency, etc. Of course, parents can be good people, who try hard to set their children on a good course, but there are no guarantees how a child will live out his or her life.”

“Our farm has been sold from one generation to the next since the beginning, so as we took over, that’s what we expected to have happen. The current transfer is happening through the use of an LLC for a variety of reasons, but this way there is no question as to who the farm will go to or how it will be transferred or what that will end up costing us. This way each generation retains its financial independence, with the farm being protected.”

“The families I’ve known that have been destroyed by farm transfer are the ones where one child was promised/expected the farm and didn’t get it, whether that problem was on their end or the parents’. I think too many parents have no regard to how fair it is to the kid who stayed home and worked, or how fair it is to their own future.

“There doesn’t seem to be any good way to prevent hard feelings about the division of personal assets, but the farmland and business doesn’t need to be part of that conversation at all. We are incredibly lucky to be working with my in-laws (who have been great) in the process of separating the farm itself from the entire estate planning conversation. Plus, this way we get to keep our century farm designation, as the farm has been in the same family the entire time.”

“Our farm is still very much the ‘traditional’ family farm with one son staying to farm and the other kids moving on to other things. What I see on many friends’ farms is that one kid stays home and works the farm while another kid leaves, screws up, and gets to come home and ‘help’. Then the parents decide that it’s not ‘fair’ for only the kid who’s been there longer to get the farm and all hell breaks loose. It does make me incredibly sad to see farms get broken up in to smaller and smaller parcels until there’s nothing left that can be farmed adequately.”

“I agree with most comments that legally there is no question about whose money and resources they are, and that kids are not ‘entitled’ to the inheritance. Let’s flip it around a bit, however. Most older folks I know are pretty dismayed at the idea that the health care, legal and other potential late-life costs could eat up not only savings but the farm. In fact, one could talk of the ‘entitlement’ nature of the retirement/late-life industry (and our society/economics in general) that encourages the elderly to spend, the notion that what’s yours is yours and by golly enjoy it (and give it to US, the senior living centers, long-term care industry, ‘wealth advisors’, etc), and let future generations fend for themselves.

“On the other hand so many of us are proud of agriculture being a CULTURE and community. Agrarian cultures around the world place great emphasis on continuance, on inheritance, AND on responsibility of each generation to steward natural and financial resources for the next. PFI itself works notably hard and well on this process, which in some ways we’re re-learning, in some ways finding new ways to make it happen in an increasingly complicated legal/financial world. So while younger generations should not be entitled to resources, should older generations not feel responsible for stewardship?

“Don’t get me wrong, I believe trade and hard work are pretty fundamental to our species, but do we truly want an economic system that breaks the economic bonds between generations?”

*For more on Irene’s and Tom’s thoughts on leadership and farm transfer, see: https://www.practicalfarmers.org/blog/2016/06/08/creating-a-strong-and-lasting-farm/#more-21762