On June 28, Virgil and Katrina Knobloch hosted 75 people on their 480 acre farm south of Bloomfield. For several hours, the group toured hundreds of acres of pasture, while Virgil explained how his grass-fed cattle help regenerate the land through the act of rotational grazing. Virgil’s Angus X Devon herd is adapted to the heat and fescue-prone pastures of southeast Iowa, and consists of 75 cows and 70 finishers (cattle almost ready for market). Those finishers, who will only see grass their whole life, are moved to new paddocks twice a day to munch on fresh grasses and legumes. Virgil likes to keep his way of farming really simple, stating all you need is cattle, grass and a trace mineral salt. When asked about making grazing decisions, Virgil said  “You have all these calendars and schedules, throw out your calendar and watch your cows!” 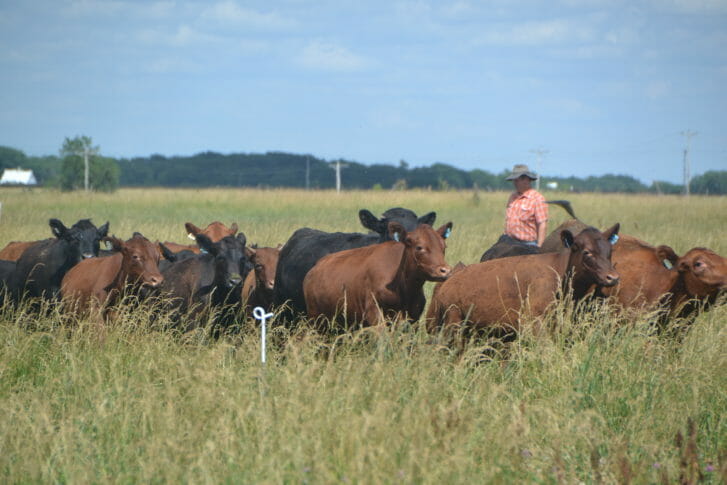 Virgil demonstrates a paddock move during his field day. 70 grass-fed cattle are moved to a new paddock twice a day, at 5:30 am and 2:00 pm, using a single-strand of electric wire and step-in posts.

Pastures are rested for 53 days to ensure adequate plant growth before cattle graze again. Virgil believes in letting his cattle eat half of what is available and leaving the other half  to be trampled into the ground, which provides soil cover and carbon. Grazing in this way contributes to the health of the soil, which was discussed by Doug Peterson, regional soil health specialist with the Natural Resource Conservation Service. Doug dug up soil samples for us to examine, while answering questions about native grasses adapted to our climate. He pointed out that cool-season grasses have two growing seasons, spring and fall, whereas warm-season grasses only grow during the summer. In total, warm-season grass produce more tonnage than cool-seasons, but in a narrower window, so you have to manage for what you want. “It takes a high level of management to keep both warm- and cool-season grasses thriving in your system,” explained Doug. 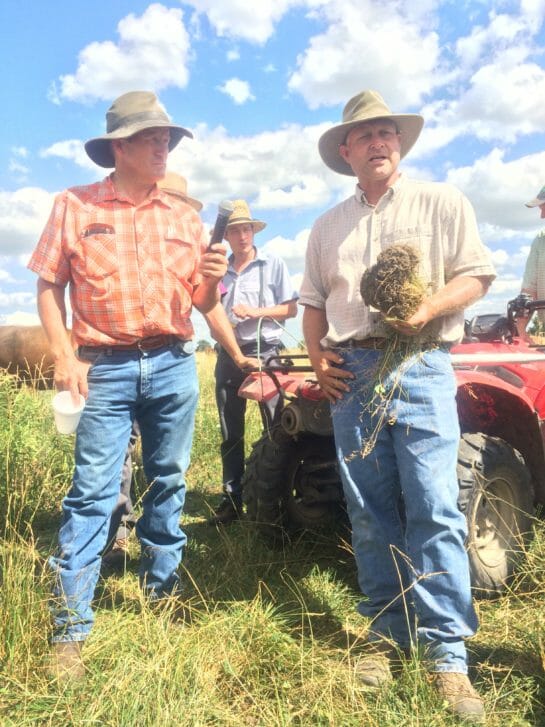 Virgil Knobloch (left) with Doug Peterson discussing the health of Virgil’s soil. The sample was taken from rotationally grazed pastures.

Doug brought up an issue with haying – explaining that haying a pasture does more than just remove the nutrients from the field – it actually damages the soil almost as much as tilling. Before a field is cut for hay, there is a protective grass canopy covering the soil. All the soil life (microbes, bacteria, fungi) are living near the top of the soil, where conditions are ideal. When that grass canopy is suddenly cut, the heat and exposure kills the life that was residing in the topsoil. Doug recommends grazing to harvest forage, instead of haying. Virgil stockpiles 1/3 of his pasture to help get his cows through winter, and buys in hay to supplement them during the remainder of the cold season. 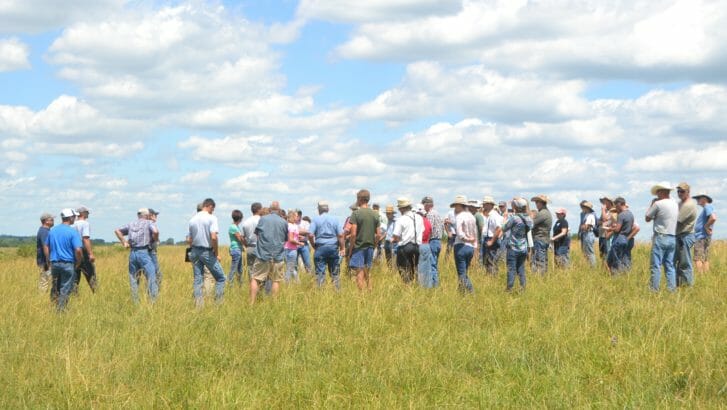 Attendees gather ’round to listen to Virgil explain his pasture species and grazing plan.

PFI would like to thank Doug Peterson for speaking at this event, along with our field day sponsors.