Paul and Nancy Ackley raise corn, soybeans, small grains, cattle and sheep on their farm near Bedford in southwest Iowa. They’ve grown small grains for many years – they used to raise winter wheat and use the straw for bedding when they had pigs. But over the past five years, they’ve been growing wheat again. 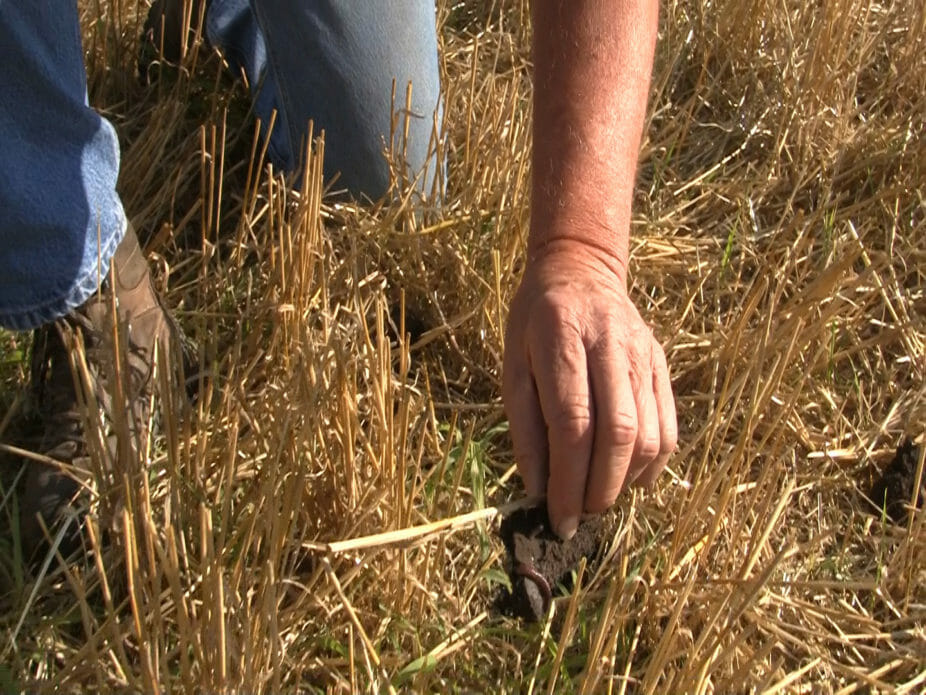 Paul Ackley of Bedford shows an earthworm while planting a diverse cover crop mix into a recently combined field of wheat in early July.

I visited with Paul a couple weeks ago, and asked him to share some of the reasons they decided to bring small grains back into the rotation. There are challenges, he says — the lack of markets and the ability to grow high yielding crops can be significant roadblocks in this part of the country — but for the Ackleys, it’s worth it. Why?

“For me it’s the inputs, the things that we can leave behind or take out. That’s what makes the small grains pay,” Paul says, “And that concept’s not new.” Practical Farmers of Iowa was founded in the mid-1980s by farmers looking to reduce input costs during tough times in farm country. He says their family really learned the lesson on how cutting costs can be a viable strategy for profitability in the 90s, when prices fell to a few pennies per hog.  “In the mid 90s, our hog operation about hit the wall,” he says. He says they were lucky enough to talk to a vet that made a few practical recommendations regarding pen arrangements and moving pigs to control infections. “Basically, we found that if you’re having problems in the nursery, you need to look to solve those problems in the farrowing house.”

These steps allowed the Ackleys to reduce antibiotics and save money, helping them to continue raising hogs until the mid 2000s. But Paul says those same principles apply to row crops – big input cost areas such as fertility and weed management can often be traced to overuse on a single tool. He says that just as he’d been relying too heavily on one tool — antibiotics — in pigs, he’d been relying too much on manufactured fertilizers and herbicides in crops, and those tools cost money. In this case, he’s been able to eliminate application of phosphate and potash after wheat, and reduce the amount of herbicide necessary on those fields. “I know our fertilizer bill has gone down, and our chemical bill is starting to follow suit,” he says.

Like many PFI farmers, another way — and perhaps the first and most immediate way — the Ackleys cut costs is by providing winter feed for their cattle. You can read about on-farm research conducted by PFI members Dave and Meg Schmidt on the topic here.

Paul recently spoke at a nearby field day at the Bakehouse farm focused on moving from a soil conservation mindset to a soil regeneration mindset. Growing wheat helps him with both of those goals. “I realized that to start rebuilding and regenerating our soil, we weren’t going to get it done with cover crops in corn and beans,” he says. “Growing small grains just gives us a lot more time to do a cover crop. We can plant the cover crop in July, get a lot of biomass, and then we graze it with cattle. It’ll feed them economically all winter. They don’t get it all, they trample about half, and so that goes back in the soil to feed the microbes.”

In addition to having more time to produce biomass, he can grow a much more diverse suite of cover crops – such as brassicas, legumes and warm season grasses. And, of course, having the cattle on that ground gives the soil a shot of manure with its associated nutrients and soil benefits.

Even more immediate and evident, he says, is how wheat + cover crops hold soil in place. “Nancy balances the checkbook and checks the credit card statement, and if we could check our soil statement, we like to see it staying in place and increasing, and not letting it go down the river where we can’t get any benefit from it,” he says. And that’s one of the reasons they like winter wheat: “There’s very little erosion in the wheat crop. We have a living root in the soil from October 15 to June 15, and then we come back in a very short time and put living roots in the soil.”

One of the reasons for growing a diversity of crops for Paul relates to growing healthy food. “I think it makes the nutrients in the soil more available to the plant,” he says. “From what I read and understand, people that test our food have found that nutrient density of the food is lot less than 40 years ago, and I think a lot of that relates to growing monocultures.” An example of this research is cited in this article from Scientific American. Paul says that if you listen to researchers like Jill Clapperton (Jill presented at the PFI conference in 2015 – you can watch her presentation here) and Christine Nichols,  they say that the diversity of crop and cover crop increases the diversity of microbes in the soil, and that increases the availability of nutrients.

“It’s nice to do a couple or three days of combining in the summer,” Paul says, “it just takes it off that tail end in the fall. Same with planting. And that’s no small item for someone that has all the acres that their planter can cover, to knock two or three days off the end and move that labor somewhere else.” He says that when you have the ability to use the same machinery for multiple crops, you need less machinery to cover the same number of acres — in particular when it comes to planting and harvesting machinery.  “If you have 5000 acres and it’s split in thirds, as in a three year rotation, maybe 1 combine and 1 planter might be able handle that. But if you have all of that 5000 planted to corn, you maybe wouldn’t be able to,” he says.

“Small grains provide somewhere for animals to go when everything else is corn and soybeans. They are just full of insects, and quail and pheasants love insects.” (As a sidenote, when I was interviewing Paul, there were bobwhites calling constantly in the background). “When we started growing small grains again, those bird populations have exploded,” he says, “And that is a benefit, I miss seeing them. They’ve been absent for a long time, and they need habitat.”