Four generations of the Wilson family welcomed 65 guests to their field day on August 13. The focus of this year’s event at Seven W Farm, located in Paullina, was on diversity – poultry, pigs, dairy, beef, sheep, corn, beans, hay, small grains – and the role of each family member on the farm. 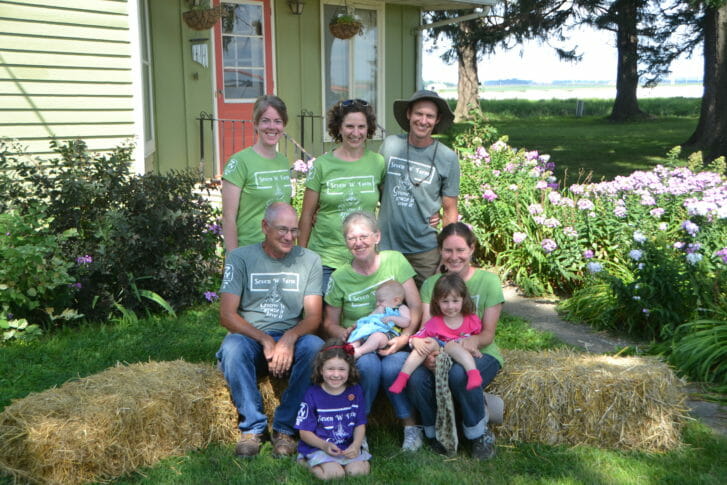 The day began with Dan and Torry explaining why they decided to go organic in 2006. Dan started having allergic reactions to the ag chemicals and Torray said he just doesn’t like the smell of them. “God gave us six senses and we should use them,” said Torray. Most of the farm is now certified organic, with 100 acres still in transition. As the Wilson’s spoke about this, it was hard to hear over the engine of a plane crop-dusting the adjacent farm.

April Wilson came back to the farm two years ago, and assumed the role of poultry producer. The Wilson’s raise broilers and layers; the meat and eggs providing cash flow for the farm and always selling out at local farmer’s markets. The Wilsons do their own processing; harvesting 450 Cornish Rock crosses per year and selling them whole. At one point they tried raising heritage breed chickens, but their customers preferred the meaty breasts of the Cornish Rock’s, so they went back to raising them. One thing they’ve learned from raising Cornish Rocks is that they need to get the birds on pasture by three to four weeks of age in order for them to become good foragers. If you wait longer, the chicks can become a bit too dependent on grain-based feed. April put together an expense sheet that lists expenses and profits to share at the field day, which is shown below and can be accessed here: Direct Marketing Poultry

The laying hens are rotated through pasture with access to a egg mobile equipt with nesting boxes. Electronetting surrounds the layers, mostly to protect them from coyotes. Hawks and weasels are also threats. The layers follow other livestock through pastures, pecking at manure to find insect larvae and bugs. This year they are following pigs, instead of the cattle, because the Wilsons don’t want the chickens to eat the dung beetles that thrive in cow pastures. 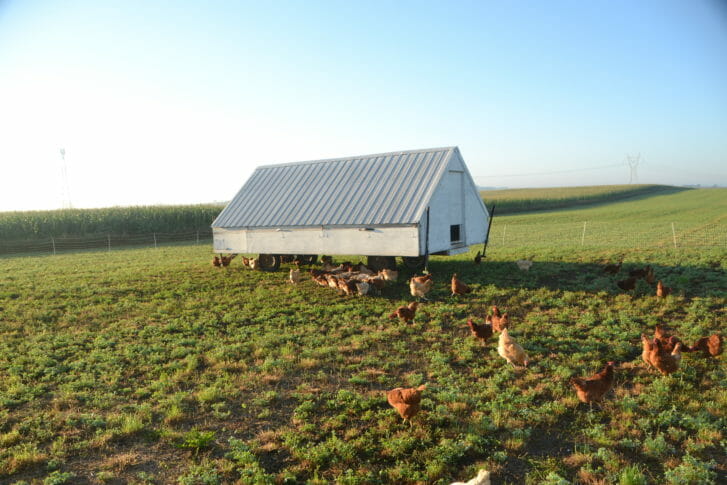 The egg mobile houses nesting boxes and can be rotated easily through pastures. 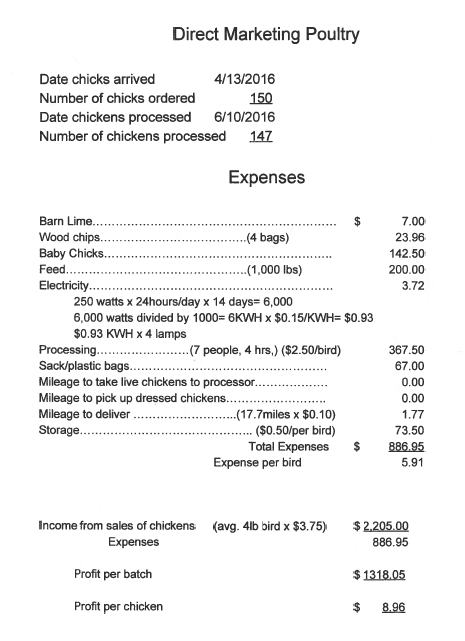 2016 marks the 50th year of pasture farrowing on Seven W farm! Dan Wilson uses A-frame structures to farrow in, most of which are 40 years old now. Dan said they cost about $200 to make and obviously last a long time. They use two electric wires with step-in posts to fence pigs in, and recently purchased some hog net from Premier Fence Supply, which has worked very well. They pipe water to pigs in water lines that lay on top of the ground, which are made from black polyethylene. Pigs are removed from pastures by the end of October when the water lines start to freeze. All of their pigs are marketed to Niman Ranch.

As of spring 2016, the Wilson’s have been shipping their milk to Organic Valley; a huge step for the family. Torray and Erin have been milking organically for several years, but their milk had not been able to get picked up by an organic processor because of their isolated location in northwest Iowa. After years of selling organic milk to conventional markets, Organic Valley was able to create a route to pick up the Wilson’s milk and haul it to the Twin Cities. They are currently milking around 40 cows, with the goal of milking 120 in the future.

Dan Wilson and David Weisberger, ISU agronomy student, conducted an experiment on rotary hoeing oats. Five pairs of plots were planted; five were rotary hoed and five were not. David discussed their findings, which can be found on this Rotary Hoeing Oats handout. Dan plans to plant 20 varieties of winter peas to continue his on-farm field crop trials this fall. 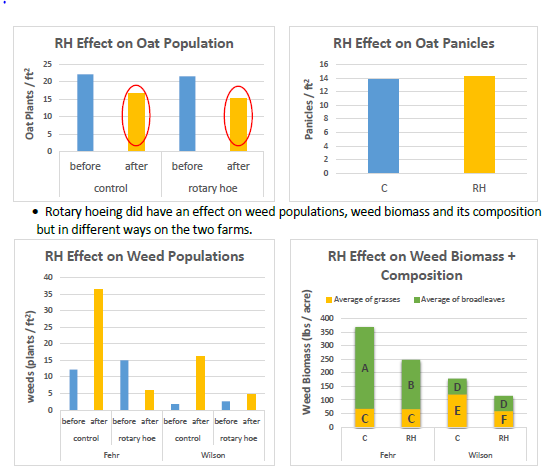 To see the full handout created by David Weisberger, visit the link in the paragraph above.

Will Winter and Roger TeSlaa, from Nature’s Best LLC shared insights on organic pasture and livestock products that promote soil microbes, forage productivity and livestock health. The Wilson are customers of theirs, and use a foliar spray on their hay fields that helps in raising the sugar content of the alfalfa. Will explained the benefits of feeding apple cider vinegar to livestock and the importance of using vinegar that has been made from whole apples. More information on feeding apple cider vinegar to livestock can be found here: Apple Cider Vinegar for Livestock. 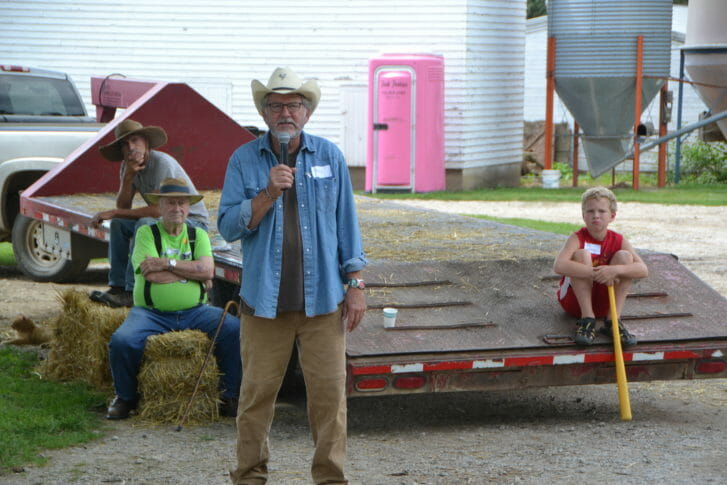 Will Winter recommends feeding apple cider vinegar to all livestock. In most cases, the recommended rate is mixing 3 gallons into 1 ton of feed. For specific dosing recommendations, see the link in the above paragraph.

A big thank-you to the Wilsons for hosting yet another inspiring field day. We’d like to thank Niman Ranch for donating the hot dogs and brats served at the potluck lunch and our other sponsors, Nature’s Best LLC, Iowa Organic Association, and Blue River Hybrids. We couldn’t put these field days on for free without your help! 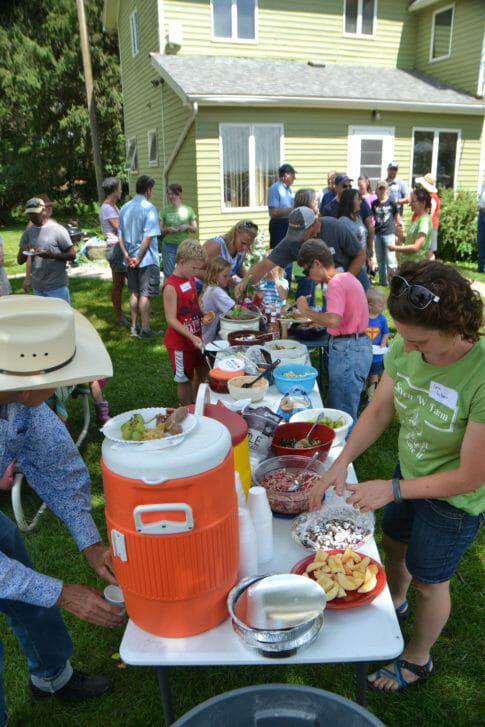 Lots of pork and home-baked goodies enjoyed at the potluck. Whoever made those lemon bars deserves a blue ribbon!