When Steve Leazer speaks of the 4th generation now on the farm, he is not referring to the new robotic milking system installed 16 months ago, but perhaps he should. This addition to the farming system has improved the quality of life for his daughter, Laura Jones, who supervises dairy production on the farm. “For me, it means having a better quality of life.” says Laura. Before the innovative robotic system (and before kids), Laura was milking 60-70 cows at 3am and 3 pm. Not a surprising schedule for all the dairy farmers out there. However, raising two kids with a third on the way got their family to considering alternatives. As Steve puts it, “If Laura wasn’t here, we wouldn’t have robots here today.”  They added the robotic system 16 months ago when Laura’s youngest was just 10 days old. “I wouldn’t recommend that!”, but Laura buffers her statement by adding that lots of moms have juggled farming and family duties. 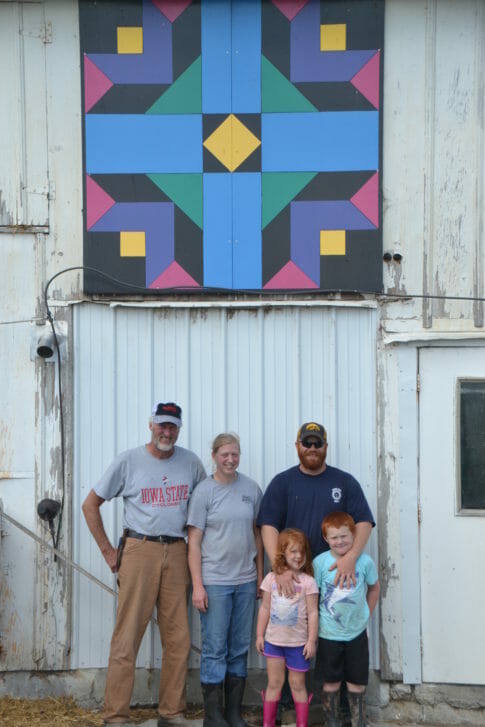 As we donned our plastic booties and headed towards the ordinary looking dairy parlor, a few of the older generation farmers reminisced about milking in the “old days”. One farmer shared a smile and perhaps a statement about the automated system, “we used to sit on a stool and…” finishing his statement with a visual reminder of how milking was done during his generation- a reminder of the progress made, and the important connection between farmers and their livestock.

Entering the dairy parlor, the system seemed surprisingly simple – but Laura explained the complex interaction between computer and cow. Laura is able to program the computer to interact differently with each cow depending on its milking schedule and physical condition. As the cow enters the milking parlor, the computer identifies the cow by its RFID tag and stores information on the milk volume produced from each teat. Wow.

Watch the DeLaval robotic milker prep a cow for milking.

So how does one train a cow to a robot? Laura does admit “it’s hard to teach a cow new things.” However, after 10-14 days the cows catch on and learn to enter the parlor on their own.  Laura smiles and states, “We had a party when a cow went in there” referring to the initial training for her herd. She is currently milking 53 cows robotically. One robot has the capacity to milk 55-70 cows. “There are only two that I have to make go into the robot”, she states triumphantly. They have the space to add another robot to the system down the road if they choose to.

They direct market their milk to Prairie Farms which strives for high quality milk. Since installing the robot, Laura said the teat ends on the cows look way better and they consistently are achieving a somatic cell count of under 100,000. “The best thing about the robot is it milks the cows the same each time.” This consistency is excellent for cow health, helping to keep milk quality high. 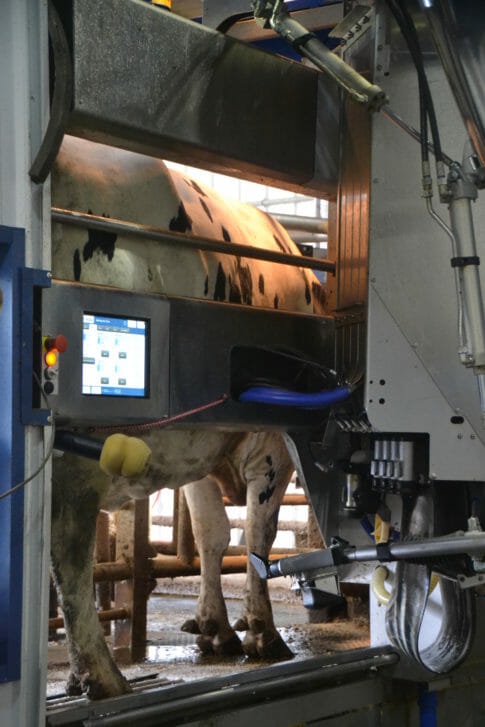 A closer look at the robotic arm that attaches to the udder.

As Laura speaks passionately about her dairy herd, her father Steve Leazer is as equally passionate about the field crops that support the system. They raise corn, soybeans, alfalfa, and rye. He took the field day group on a tour showing his baler that has a knife system that makes cuts in bales anywhere from 3-12 inches long. This cut allows the hay to continue to respire and minimizes mold issues.

Next stop, his feed mixer. He fills the mixer twice a day with a nutritional combination of fiber, protein and energy. Each mix feeds the cattle 3 times. Not to be outdone by Laura, this system is automated as well. He states that feeding them more often keeps the feed fresh and cuts down on waste. Most of what the cows are fed is grown on the farm, with the exception of cottonseed, soybean meal, vitamins and minerals. 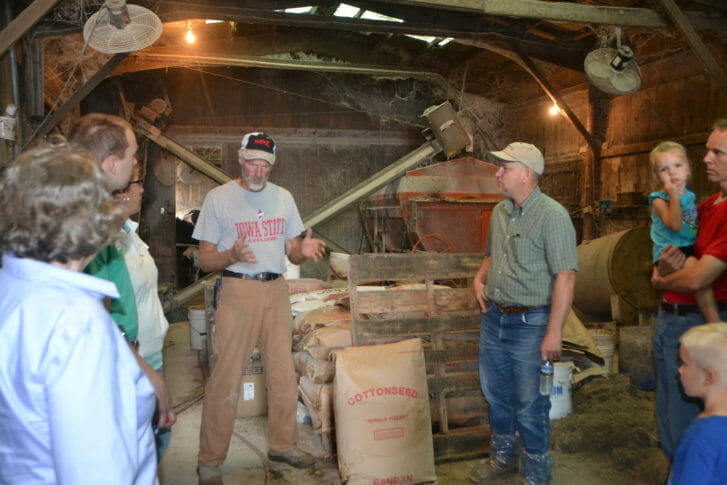 Steve Leazer explains dairy rations and how each is mixed to the field day crowd.

Steve also has a Slurrystore for liquid manure storage, which helps with water quality. He applies manure once per year in the fall, in field where soybeans have just been harvested. The nitrogen is then delivered to the corn the next spring.

As Steve addresses questions from many curious attendees, he helps put things in perspective, “everything gives you a hassle if you let it.”  It would seem that this positive attitude towards farming and hard work is also something passed down from generation to generation. Steve said there are only seven or eight dairies left in Cedar County and only 1 in Muscatine county, “you gotta have a passion for it.” It’s clear that both Laura and Steve have a passion for dairying, and installing a robotic milker has allowed them to continue pursuing their passion.

As the tours finished, the sun came out and the 60+ attendees gathered for a great meal and more conversation. Many admitted that they would not be investing in the $260,000 robotic system, but a curiosity of the technology and respect for their farming neighbors brought them out on a soggy day. 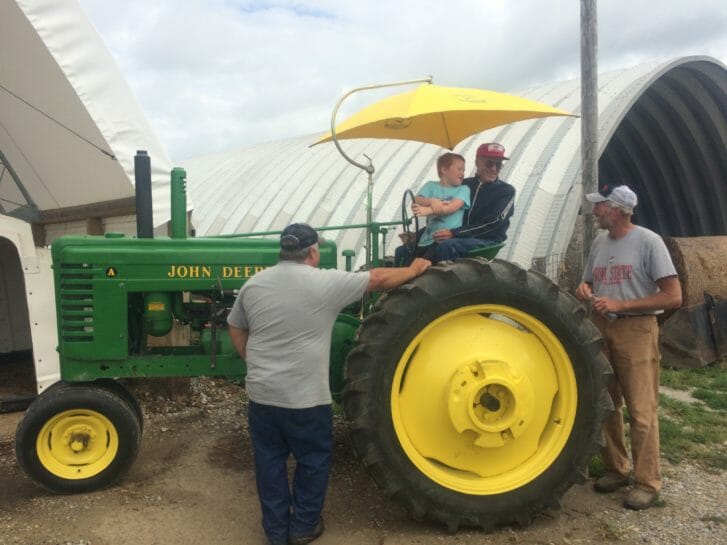 Practical Farmers would like to thank Agri-King and Midwestern Bio Ag for sponsoring this field day and Prairie Farms for providing the milk we drank during lunch. Thanks again to our hosts Laura and Steve!