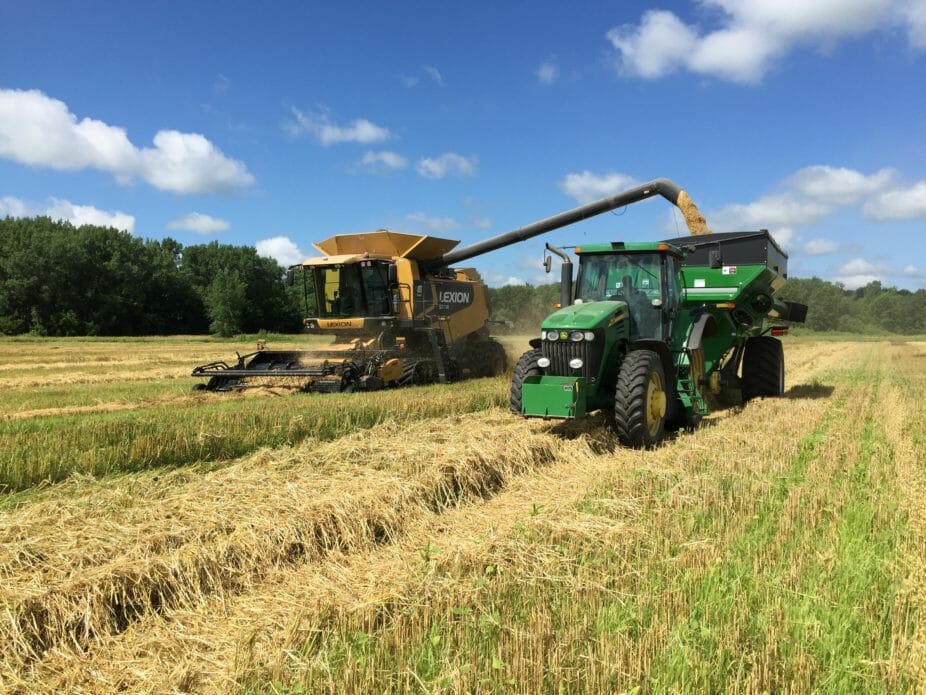 Darren Fehr harvests oats on his farm near Rolfe. Photo courtesy of Darren.

Last week, I visited Darren Fehr at his farm near Rolfe. He was harvesting oats as part of an on-farm research trial with David Weisberger of Iowa State University, looking at the impact of rotary hoeing on oat yields and weed biomass. I rode along in the combine for part of the day, and asked him some questions about producing small grains profitably. He and his family grow corn, soybeans, small grains and edible beans — like kidney and black beans–, all organic.

“The diversity is both a challenge, but it’s also very rewarding,” Darren says, “We can get kind of caught in this whole corn and soybean paradigm, and that’s all we believe we can do. The reality is that there’s lots of other opportunities out there if we ask the right questions.”

“We’ve always had oats or a good small grain in the rotation for organic. I think anyone that’s serious about organic farming is fooling themselves to think that they can do it well consistently without a good small grain companion crop.” He says that a big part of that is weed control: you might be able to control weeds for a while without a successful small grain (or cool season) crop, “but sooner or later you’re going to get bit.”  This pretty well answers the reason that Darren grows small grains, but why go organic?

Darren started farming in 1994, and in 1998 he started farming a piece of ground that was coming out of the Conservation Reserve Program (CRP) and someone recommended that he tried planting organic soybeans, which were $25/bushel at the time, whereas conventional corn was at about $3/bushel. He said it went okay, but he’s been at it ever since.

“At that stage in my farming career, we were starting with really nothing — we didn’t have much of a land base — so it did open up the opportunity to create more value per acre of land, instead of trying to find more land. And then, after that, it became more of a personal challenge.” He said when he started reading more about organic, he saw there was a different way of looking at production agriculture.

“Can we do it on a larger scale and make it work? A lot of people said no you can’t.” He’s found that he can. “I would say the learning and the proving it out and making it work, just from a personal standpoint is just really rewarding, the fact that we can grow 200 bushel corn, 125 bushel oats, and 2500-3000 lbs/acre edible beans.”

He’s certainly going against the current, but enjoys it. “There’s a lot of messages we hear, that ‘we feed the world’ and in order to feed the world we need bioengineering and all this. You can believe that if you want. I think there’s opportunities to do things differently in today’s agriculture that can still create good yields. We may not have absolutely as good of yields as our conventional neighbors, but I know there are times when our fields do better. Our farm averages may not always be as good and we have a few big mistakes every now and then where we have some weeds get away from us and we’ll have to take them out. You know, we don’t do everything right, but I think there’s a lot that can be done thinking differently.”

Delivering What the Customer Wants

In addition to the challenge of farming without the use of chemicals, Darren likes the challenge of creating a product in demand.  “I don’t know that we have to be dependent upon today’s modern biotech solutions, not that they’re all bad, I don’t like to get into that argument, but the reality is that the world today is asking for something different,” he says.

The size of the organic food market has been rising for years, with no signs of letting up, and that increasing demand is something he considers. “I look at it from a purely business and marketing standpoint, too,” he says, “You can create what the customer wants or you can try to shove something to the customer that they may not really be interested in. I just enjoy the challenge of being able to try to do it differently and do it well. And the fact that the market pays a premium for us to do that is a bonus.”

“It’s provided an opportunity for us to be different and to provide value to people who are willing to pay us to do it. From that standpoint, I enjoy it,” he says. “Again, I think it’s as much a personal challenge for me, just enjoying farming, and wanting to try to do the best we can, you know, learning maybe trues or secrets that have been lost generations ago that people understood that now they don’t have to because chemicals cover those mistakes. But I guess that’s as much a personal thing for me, just to try to do a good job.”

Opportunities for the Next Generation

Darren also says that small grains and organic allow him to get more net profit per acre, and that doesn’t necessarily mean bringing in more revenue. He gives the example of how small grains can impact input costs, and therefore the bottom line: “We can spend a lot of money on hiring people to walk beans,” he says, “and so if the oats helps get our weeds under control, you can add an extra $100 on to that oat crop because of the money you’ll save the next year.” He says that at the end of the day, you’re farming for net, and that’s what you have to look at.

The added net profit per acre from organic has given his family additional options: “It gives us a great opportunity to bring our children into our operation if we want it to. There’s room for them because we don’t have to farm a lot of acres to do it,” he says.