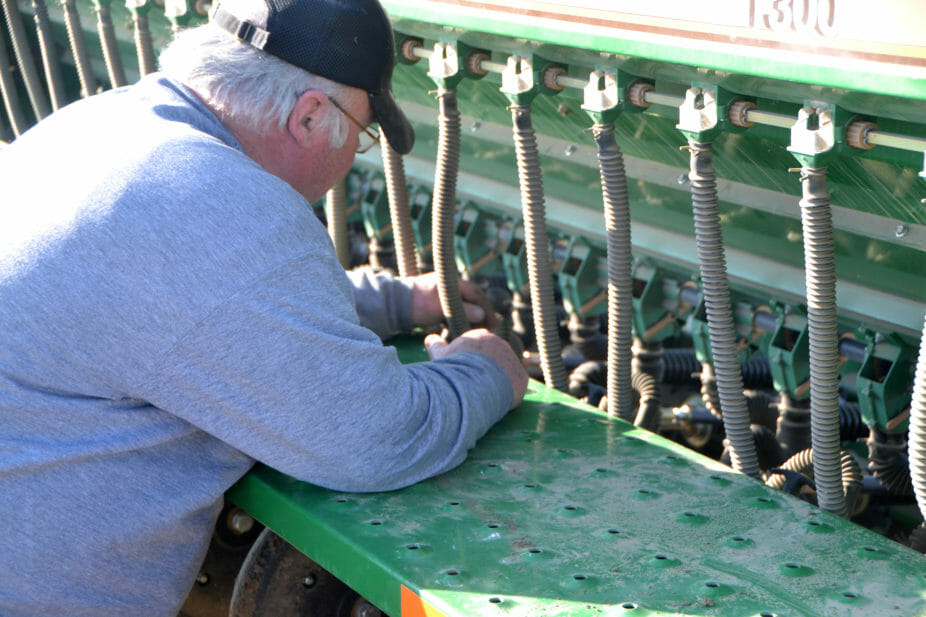 Vic Madsen of Audubon adjusts his grain drill before planting oats this March.

Vic and Cindy Madsen raise organic corn, soybeans, hay and small grains, as well as hogs and cattle, near Audubon. The Madsens grow small grains for many different reasons: weed management may be one of the most important for their organic operation, but small grains’ effect on the soil, their labor and the livestock operation are other big reasons.

Vic has been working to reduce his overall weed seed bank in the soils on their farm. He says this is a long term effort, but expects to see results over the course of a few years. He says that a cool season crop like a small grain is essential in that effort. “Different weeds grow in warm season crops, like corn and soybeans, than the ones that grow in small grain crops. The ones that do grow shouldn’t go to seed,” he says. He says sunflower and buttonweed are the toughest ones on their farm, and having oats up and growing strong before they germinate really sets them back. “There will be some broadleaf weeds come up in that oat stubble, so you can get a flush of weeds killed if you clip the stubble about a month after harvest. I think the following year’s corn and soybeans are cleaner behind the small grains.”

Speaking of weeds, Vic will be hosting a workshop on controlling weeds with cultivators along with Paul Mugge. The workshop will be held on Sept. 9 at the Madsen farm. Find more information on the cultivator workshop here.

One of the important aspects of most organic operations is using oats as a nurse crop to establish an alfalfa hay crop or a clover green manure crop. “The clover/alfalfa that we plant with the small grains is one of the key things that we use for fertility for corn,” he says.  “You can expect maybe 50-60 lbs of nitrogen credit after one year, but if you can leave the alfalfa or clover for a second year, you can get up to the 150 lbs per acre area.”

Another major reason Vic grows small grains is the improved quality of the soil that results: “I love the way the soil works and looks and changes after a year of small grain with either clover or alfalfa. That clover or alfalfa roots combined with the small grains roots seems to change the soil, and it makes it a lot more friable and crumbly. It’s just a lot nicer soil to work with.”

“The other thing that’s nice about small grains is that it spreads out your workload,” he says, because of the earlier planting and harvesting time. “I guess we kind of laugh because we’re still working in July when everybody else is done, so you do have a longer work season, but it really takes pressure off the fall.”

For hogs, he starts including about 10% oats in the ration at about 50 or 60 lbs, and then gradually increases that to about 30% for a final finishing ration. Sows get 20%-30% in gestation and none in lactation. He said they’ve also grown barley, wheat, and succotash over the years. “The barley and wheat can pretty much be interchanged for corn, barley especially, wheat you have to hold back a little bit. They all make great feed stuffs. The profitability probably isn’t quite as high as growing corn when you’re feeding it, but if you look at the other things that the oats and barley and wheat do for the farm, it averages out.”

The small grains also work into their livestock operation because of the straw. “I really like raising hogs on straw,” Vic says, “we bed the calves and the cows some, too.” He says they also sell a little bit of organic bedding to organic gardeners.

Here’s an ISU Extension publication on feeding small grains to swine. Also useful could be the niche pork production guide from ISU.

“The thing you have to remember about rotations, when you look at profits, you have to average the 5 or 6 or 7 years of your whole rotation together and not just look at the one oat year or the one hay year,” Vic says. He’s seen that corn and soybeans both yield significantly higher in rotation with oats and hay than they do by themselves, and that’s something that needs to be factored in to the economics. “You have to add that extra kick to the corn as added income to that oat or hay year.”