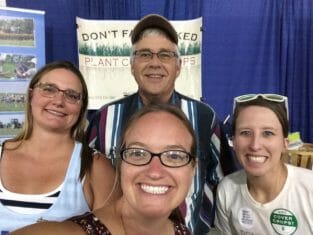 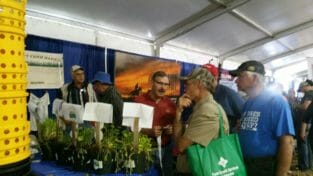 PFI members Dan Hayes (front) and Mark Peterson (back) talk to farmers about cover crops at the PFI booth at FPS.

The Farm Progress Show was in Boone, IA last week. Practical Farmers of Iowa has been hosting a booth at the show the past three times its been held in Boone, IA. The booth was filled with cover crop plants, PFI materials and most importantly PFI farmer experts who shared advice about cover crops with other farmers. This year’s show was different. It felt different when staff and PFI farmers asked others if they were using cover crops. Or if they had considered using them. More farmers came into the booth this year than in previous years. More farmers asked our PFI crew in-depth practical questions about how to make cover crops work on their farms. There was genuine interest about this important conservation practice.

Have we turned the corner on acceptance of cover crops? It really seemed so. In addition to all the great conversations at the PFI booth in the Varied Industries Tent. We also partnered with Conservation Districts of Iowa to show off cover crops in the field and helped seed a cover crop plot near Conservation Central. Other PFI farmers also staffed a tent nearby that plot where they could show off cover crops. If you missed the show see below the farmers who staffed the booth and some of the topics they talked about. 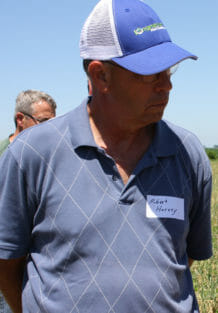 Ruth and Robert Harvey, of Redfield (central Iowa), have been using cover crops on more than 1,000 acres and answered questions on:

On Wednesday, Aug. 31, farmers met with: 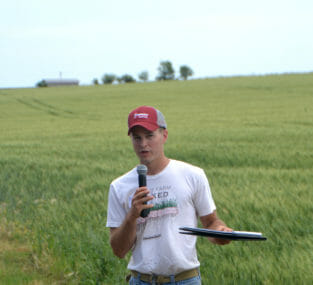 Nathan Anderson, of Cherokee (northwest Iowa), and his family raise corn, soybeans, cattle, small grains and hay. They have been using cover crops for more than four years and answered questions on: 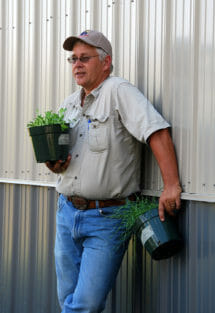 Mark Peterson, of Stanton (southwest Iowa), was at the booth throughout the day. Mark and his wife, Melanie, raise corn, soybeans and small grains on about 500 acres, and have been using cover crops for eight years. Mark answered questions on: 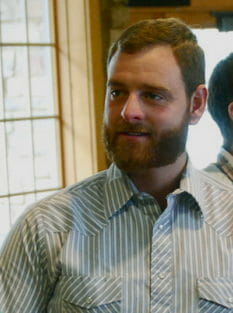 On Thursday, Sept. 1, farmers met with:

Dan Hayes, of Stanley, raises asparagus and guinea fowl, and talked about: 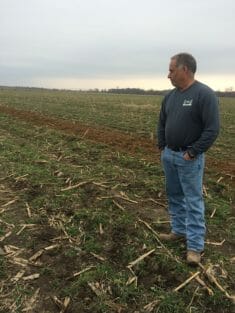 Mark Schleisman, of Lake City farms more than 2,000 acres, using cover crops on at least 1,000 acres, and has a cow-calf operation. He answered questions on: