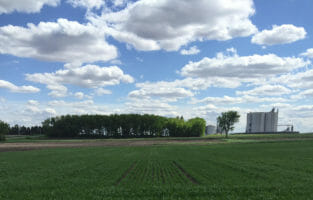 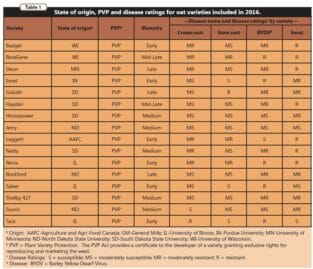 Learn more about the origin and disease susceptibility of each variety.

Evaluating oat varieties for susceptibility to disease is important because greater disease presence during the growing season reduces the potential for a “heavier” oat which can affect marketing of oats. Also farmers might desire oats in their rotation to meet different goals. Learn more about different maturity ratings and state of origins of the oats evaluated in our variety trial. 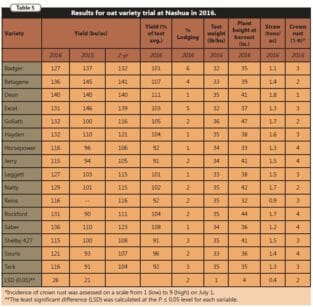 Test weight and plant height did not tend to differ among the sites. However, much more lodging occurred at Kanawha and Charles City than at Nashua. Lodging at Kanawha also resulted in much lower yields than the previous year. Saber, Reins, Betagene, Deon, Badger and Excel scored low for incidence of crown rust. Hayden, Goliath, Reins and Shelby 427 generally had the greatest test weights across locations. 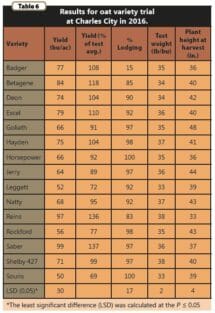 Straw yields were only collected at Nashua with Deon and Natty the top performers in that respect. Reins plants were the shortest at each location, which generally contributed to less lodging than other entries. Oat millers typically require a test weight of 38 lb/bu before dockage is applied. 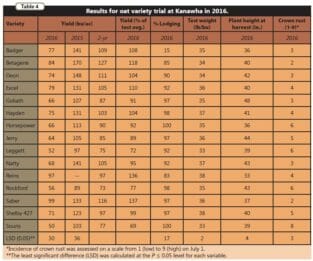 Kanawha made this requirement while Hayden and Natty were close (Table 4). None of the oat varieties at Nashua (Table 5) or Charles City (Table 6) achieved a test weight greater than 36 lb/bu.

Selling grain into a specialty market (i.e., for human consumption) takes an increased level of management and care for the final product. Farmers interested in selling oats to food grade milling companies in the northern Cornbelt have some oat varieties to chose from which yield well and can reach close to desired milling specifications. Of the varieties screened in these trials, Reins was high yielding at all locations and at one location reached the test weight specification (38 lb/bu) identified by oat millers. Hayden and Natty typically had high test weights and generally produced good yields at all locations. Additionally farmers could use a grain vacuum to further clean oats to increase the test weight of the final product leaving the farm. Grain vacuuming is a common option to further add value to harvested grains behind the farm-gate. This study is part of an Oat Pilot Project where corn and soybean farmers are working together to provide 500 acres worth of oats to the food and feed markets in north-central
Iowa. The results of the 2016 variety trial and the pilot project will further improve our understanding of the barriers and opportunities row crop farmers face when adding oats to their farm business.