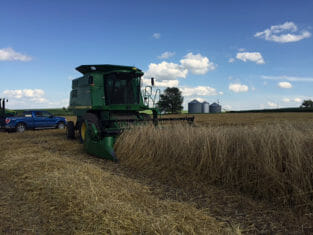 Jack Boyer harvests cereal rye at his farm near Reinbeck.

If you don’t get Wallaces Farmer, check out the online version of my article in the September issue for a rundown of the small grains harvest around the state. I sent out a request last month for members to share yields, test weights and some of the issues they had with harvest this year. Overall, PFI members across the state were more successful growing small grains this year than last year, due to a drier June which led to less disease pressure. A wet July gave some farmers headaches when harvesting, but most were able to get the crop in.

In the article, you can read some of the responses from John Gilbert of Iowa Falls, Jack Boyer of Reinbeck, Jerry Laughlin of Imogene, Mark Schleisman of Lake City, Paul Mugge of Sutherland and Ron Rosmann of Harlan. In addition, we heard from Rob Davis at Whiterock Conservancy and Matt Liebman at Iowa State University. Rob and Matt didn’t make the Wallaces Farmer article, but you might be interested in their results as well. You can see them below:

Intended market or use: Own cover crop

Harvest issues: No issues with harvest but had to crank up the air.

Comments: We had a better yield on the Wheeler rye than any years past that I credit to the higher seeding rate.

Intended market or use: Feed

Comments: Yields were right on our 11-year average.