Anita O’Gara and her three brothers grew up “in the shadow” of an old country church and cemetery near Urbana in Northeast Iowa.

“St. Mary’s Cemetery always felt like part of our land to me,” Anita says. “My great-grandparents bought the farm in the 1870s, including land surrounding the cemetery where they were later buried. The farm sustained the family when they came from Luxembourg. During the time my brothers and I grew up there, it was a typical farm of its day. We had hogs and beef cattle. Chickens were running loose, and there was a milk cow and a huge garden. Mom sustained us by canning everything in sight. It was hard work of course, but it was a nice life!” 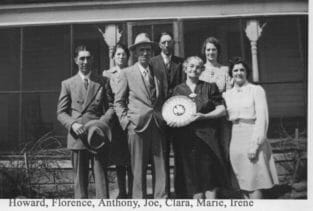 Howard Sand, Anita’s and Duane’s father, is on the far left.

The family story followed a familiar trajectory: Anita and her brothers Duane (a PFI member), Ron and Richard went on to college and pursued non-farming careers. Through the years, their father, Howard, let go of the pigs, the chickens and the cows. Eventually the crops consisted of only corn and beans. The farm buildings provided storage, or sat empty except for grandkids playing in them.

Howard, who was born on the farm, moved to town in his 80s to be closer to his wife Esther, then a resident of the Lutheran Home in Vinton (of which “the family cannot speak more highly,” Anita reports).  He sold two acres that included the house and outbuildings so the homestead could be home to a new family. He enjoyed keeping active in farming, though, through a crop-share arrangement with his tenant neighbor on the remaining 114 acres.

By the time he was 97, however, it was time for Howard’s children to become more active in the farm management. Careers had taken Ron and Richard out of state, while Anita and Duane both settled near Des Moines. The siblings began discussions about how to better manage the farmland.

“Dad loved the crop share handshake agreement. He still felt like a farmer. But he wasn’t actively managing the land. Duane’s career centered on soil and water conservation policy, and he pointed out where tile needed to be repaired and grass waterways replaced. I held Dad’s power of attorney and handled other things for him, but I didn’t want to step into the tenant relationship and the farming. We hired Hertz Farm Management on Dad’s behalf, asking them to handle repairs and look at soil health.” 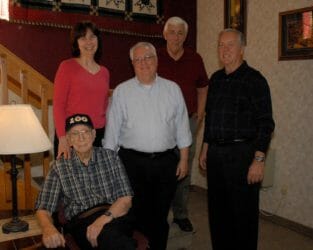 Howard Sand at his 100th birthday, with children Anita, Duane, Richard and Ronald.

The siblings also began discussing what would happen with the land when their dad was gone, which “seemed weird talking about, at first,” Anita says. Years before, Howard and Esther made it clear that they expected the land would be sold, and Howard had suggested auction. “They had seen too many families where siblings fought about the land. Dad didn’t talk much about this, but we knew how strongly he felt about it. Preserving family was more important than preserving land.”

After Howard’s death in December 2015 at age 100, the Sand siblings talked through their options via phone calls. “We talked about permanent land protection but decided against that. The land is not under development pressure. Soil health and conservation practices are important, and we felt that a landowner who lives on the land and actively farms it might be inclined to take the best care of the land,” Anita says.

The Sand siblings decided that they didn’t want to go to auction, because “we didn’t want to leave the next owner to chance.” Land down the road had recently sold to a farmland investor before land-owning neighbors had an opportunity to purchase. Brothers Ron and Richard especially appreciated that “if you keep the land in the hands of someone who lives in this area, you are benefitting the school and the vibrancy of the area. You give back to the community. We wanted to hand over that deed to an established family that was nurturing another generation.”

Their common goal became: Give good farmers who are part of the community a good first chance to own this land.

Anita recalls, “Duane came up with the idea of a private sale, identifying local families who were established farmers, who had another generation coming into their farm operation, and who might want to purchase. Hertz said they could help, but they don’t have a lot of call for that. They mainly see people wanting to go to auction or publicly list their farm for sale.”

Some families heard of Howard’s death and expressed interest in buying. Duane sleuthed out other good prospects by asking friends in the area for ideas, and he made the first phone calls to the farm families. After consulting with his siblings, Duane then provided a short list for Hertz, and the company started a series of one-on-one, one-at-a time conversations in the order the Sand siblings had laid out.

“My brothers and I agreed we weren’t out to get absolute top dollar,” Anita reports. “We were out to find a fair value offer. We wanted to be happy with who we were selling to. We needed to go with the flow a bit.” 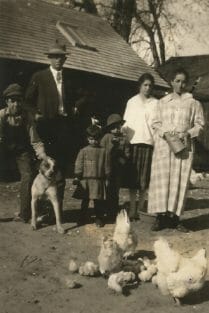 The Hertz firm’s objectivity and experience was helpful to the Sands. The Hertz staff provided the appraisal and handled all the business conversations, negotiations and paperwork. Through conference calls, the staff kept the siblings informed on progress and created opportunities for the siblings to discuss and make decisions.

“We were certainly blessed in finding that Duane Kuhn, who lives on an adjacent farm, had the desire and the assets to buy the land. His son was finishing at Iowa State University and majoring in agriculture. They are rooted in this community,” Anita said.

While the siblings learned to make business decisions about the land together, that doesn’t mean that the sale of the Sand land isn’t still, almost a year later, powerfully emotional for all of the siblings.

“Letting go of family land feels like you have let go of your identity, and it takes time to work through that. Our roots are still there. There is something in you that is sunk deep in that soil. It’s a process of letting go. You feel like you’re losing a piece of yourself, but you’re not. We are so much more than what we own.”

The Sand’s story has many parallels with the people Anita serves at Iowa Natural Heritage Foundation, where she works on permanent protection with many who love their land. “The emotions are stronger than they realize, but they need to make logical decisions. The ones I have sorrow about are the ones where death is recent, the siblings hadn’t talked about the land before, and they need to decide too soon, even while they are grieving. I know two families right now where land decisions are causing great tension among the siblings. In that situation, families often say, ‘Let’s go to auction and get it over with,’ but that may not be the decision they are happy with later on.

“I’m so glad that my brothers and I talked during Dad’s lifetime about how best to sell the land someday. Knowing we were in agreement on what was important to us made a difficult time so much easier.

“The fact that our homestead had been sold years ago helped us, too. We went through the loss of the house and buildings 20 years ago. The sale of the house was hard for some grandkids, but they are not so attached to the crop ground.

“I’m grateful that my brothers and I are not only speaking to each other, but we are closer than ever after going through this together. We have good communication and common values. Those values are a huge legacy from our parents. This process helped me understand that.”

Ron Sand sums it up this way: “We all feel that the farm sale was made easier knowing that we are passing the land forward in a way that supports our local community. That community has been a part of our family for over four generations.  It will always be home to us.”