Grassland bird populations in Iowa have been in decline, but studies have shown that conservation of birds can be facilitated in landscapes by introducing grazing disturbances at appropriate stocking densities.  Bird species that have been threatened, such as the bobolink, dickcissel, grasshopper sparrow, Henslow’s sparrow, and the eastern bluebird, nest in grasslands, which can be provided by rotationally grazed pastures.

For the last several years, Bruce Carney, a cattle grazier in Maxwell, has been observing diverse bird populations in his pastures. Bruce lives a quarter of a mile away from Chichaqua Bottoms Greenbelt, a wetland and prairie conservation area, and wondered if his pasture provide adequate bird habitat, similar to that at Chichaqua. “I started seeing bobolinks in my pastures and was curious why they are coming to my 300 acres when there are 10,000 acres of wildlife conservation down the road,” said Bruce. The objectives of this research project were to determine if properly managed pasture could replicate the bird habitat of a restored prairie and how pasture with perennial plus annual plant species effects bird populations.

You can read the full report here: Monitoring Birds in Rotationally Grazed Pasture 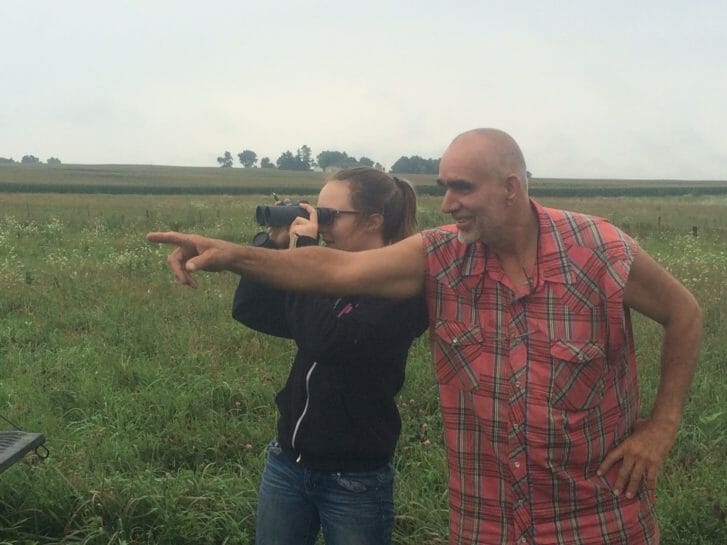 Here’s how the trial was conducted:

Total number of all bird species observed in each habitat type reported on a log scale. Columns labeled with different letters are significantly different. At P < 0.05, more birds were observed in the Perennial Pasture and Perennial+Annual Pasture than Restored Prairie.

Number of different bird species observed in each habitat type. Columns labeled with the same letters are not significantly different. At P > 0.10, there was no significant difference in number of species between habitats. 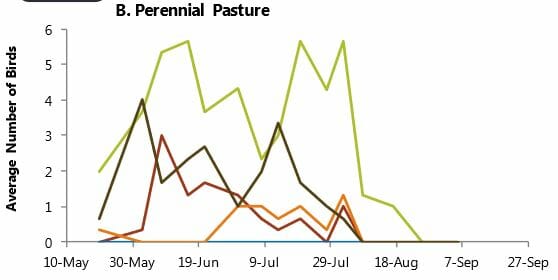 Average bird abundance, for the five species of conservation interest in perennial pasture.

The conversion of row crop land into grasslands is an important step in creating a working landscape that can provide wildlife habitat along with agriculture practices that generate profit.

For more details on this trial, read the full report: Monitoring Birds in Rotationally Grazed Pasture. Support for this trial was provided by the National Fish and Wildlife Foundation and Drake University. For more information about this study and other studies as part of PFI’s Cooperators’ Program, contact Meghan Filbert at meghan@practicalfarmers.org.