Like many farm families, the Van Der Pols, of Kerkhoven, Minnesota, are in the middle of a farm transition journey. They will share their story at the PFI conference Jan. 21 and also at the MOSES conference Feb. 25.  This is the first of a three-part series.

Jim and LeeAnn Van Der Pol are in their 60s and in the thick of farming—and of shifting their roles and ownership on their Central Minnesota farm. Jim’s parents started out with a “team of mules and 600 dollars,” as Jim’s father liked to quip. They were children of the depression and dropped out of school to work. “My dad was raised very rough, malnourished and worked too early and too hard,” Jim says. 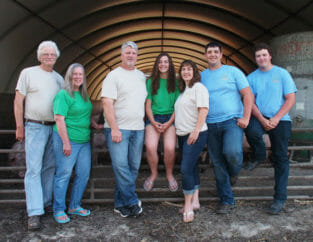 By the time Jim and LeeAnn came back to farm in 1977, his parents owned 480 acres — quite an accomplishment. But Jim’s father had had enough of farming by then, and he and his wife promptly retired and moved to town. Jim and LeeAnn moved into their house. “My dad walked away from management when I came back. He would drive the tractor and that’s all he would do. I didn’t wish he could provide more guidance, but I probably should have. There was never an idea in his mind that he was still running things. He basically said ‘now this is yours.’” The farm was Jim and LeeAnn’s to operate, but ownership proved to be a lot more complicated.

In 1979-80, Jim and LeeAnn purchased 100 acres on contract from Jim’s parents so that they could improve the house and add buildings for the livestock. “We thought we should own it to be putting money into it,” Jim says. Through the years they also purchased the farm’s machinery “for a pretty good price but still we had to buy it.”

When Jim’s parents died, Jim inherited a one-fifth interest in 320 acres; his four siblings inherited the remaining interests. Jim and LeeAnn were still paying on contract for the 100 acres, although it had been converted into a mortgage because they had purchased another 60 acres from Jim’s mother. Then Jim’s two older siblings wanted their money out of the inheritance, so Jim and his two younger siblings came together to buy them out. Now Jim and LeeAnn are “working out a pretty good deal” for buying 80 acres his younger sisters own and adding it back into the farm.

If that arrangement comes together, Jim and LeeAnn will have purchased 320 acres of his parents original 480 acres in three different transactions.