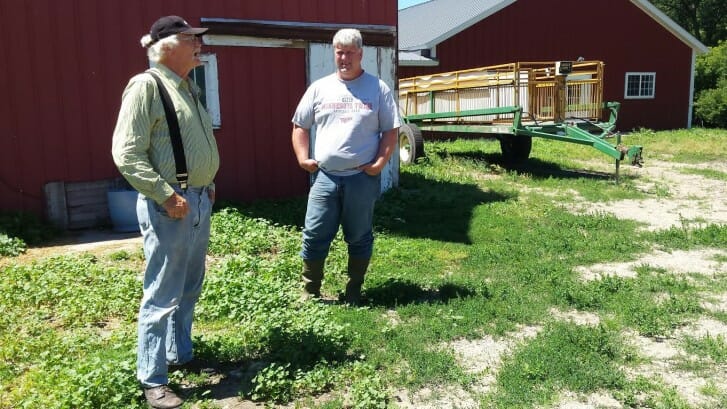 When Jim and LeeAnn Van Der Pol began farming in 1977 on his family’s Central Minnesota farm, they added pigs to the operation. When their son Josh and his wife Cindy joined the farm in the mid-1990s, they expanded the pasture farrowing. “And then we hit 1998 and the $18 hogs in October and November. That really knocked Josh and Cindy around, because we didn’t have any hogs on contract. And we lost what we thought was going to be a goodly share of our retirement by that time because of what the hogs did to us.”

A terrific opportunity opened up, though, and Jim took a job building the facilities for a low-input swine facility at the University of Minnesota’s experiment station near Morris. Jim and LeeAnn turned over a portion of his salary to Josh because the farm wasn’t able to pay him much out of the farm budget. LeeAnn and Cindy both worked off-farm jobs too, LeeAnn at a nursing home and Cindy at her parents’ garden shop.

The Van Der Pols recovered from the hog price collapse and expanded their production again, building a new hog house four years ago and adding a couple of hoop houses. They also put a lot of time and energy into starting a meat business, Pastures A Plenty, through which they now sell to stores, restaurants and direct-to-consumer throughout Minnesota. “That meat company is going to provide a lot of opportunity for those who want to work at it and work in it,” Jim says. LeeAnn adds that, while “the farm checkbook sucks money all the time, like most farms do, the meat company has six figures in the checking account. Sometimes we plot about how we can get money from the meat company to the farm.”

“When we started selling pork and later beef and chicken direct, we decided we needed a separate accounting structure for the meat business,” Jim says. “We needed the farm to be selling the farm animals into this other entity, which would pay to have them processed and to sell the products. That way, we could tell if we were making money on the farm or on the business.” They chose a subchapter S corporation, with Jim, LeeAnn, Josh and Cindy all partners in the company.

Then they formed a Limited Liability Partnership – with each family owning 50 percent — to hold the machinery, current crop inventory and breeding livestock. Before forming the LLP, they had been turning over portions of the breeding livestock at the end of each year to Josh and Cindy through bills of sale that were not notarized. “Our tax accountant, Candace, told us you have to get this organized; the way you are doing it is a red flag to the IRS,” Jim says. “Josh and Cindy have been here a long time, and we are trying to reward them for the effort they have put into the farm,” Jim says. “Then, two years ago, we made Josh and Cindy 60 percent owners of wqwthe LLP. We are using the LLP to edge ourselves out of the farming operation. Our plan is to keep on passing over shares until we have a minor share or are out. We haven’t set this by calendar; it has to do with who is doing the work. So that has to come together.”

Now a wonderful new complexity has emerged: “Our two grandsons are talking farming,” LeeAnn says. “Jacob is 21, and he took ag business classes for two years and is now back living with his parents and wanting to farm. Andy is 18 and went off to college this fall, but he wants to farm too.” Josh and Cindy’s youngest is “still wrapped up in high school,” as Jim says, but she’s interested in the farm too.

“It doesn’t seem like there would be room for many people on 300-some odd acres,” Jim says, “but we have a lot of work here. We have a lot of livestock, and it’s on the low input side. Then there is the entire labor that it takes to make the meat company run. We can’t keep up with it! But is there income to go around?”

The Van Der Pol farm needs a marketer, farmer and accountant, and those roles are shifting as well. Right now, Cindy and LeeAnn market the meat, with Josh also doing some, and the grandchildren help pack orders. LeeAnn is the family accountant, “because no one else wants to do it. But I’ve gotten confident at it. I don’t know who is going to do it when I quit. Jacob likes the machinery better. Andy has real knack for working with the cows. Neither of them likes the marketing. Jim likes marketing as well as anyone, and he’s supposed to be quitting. Marketing is communicating, and Jim is mainly our communicator.”

Says Jim: “So now we are asking: Is there someone out there in the nearby family who could come in and help with that? And that means bringing them in and cutting them a share. At least one of our daughters has a real knack for these things. She collects people and friends like honey collects flies. She has a small part of the business running very well in New Ulm through an informal food coop they are trying to organize. She could have larger role in the future, she just has to be invited in.”

“We wanted to avoid the old scenario of the 70-year-old doing all the farming but he’s still the boy because the 90- year-old owns everything and makes all the decisions,” Jim says. “I’m not picking out the seed now. The last two tractors we bought I had no say in. Josh, Cindy and now Jacob somewhat making those decisions. I’m not agreeing with all those decisions either. There’s an old Amish story where the older man is asked, ‘How do you get along, you people, two families on the same yard?’ The older man says ‘you get out there and cut weeds and keep your mouth shut.’”

For Part One of this series: https://www.practicalfarmers.org/blog/2016/12/28/changing-farmland-ownership-van-der-pol-farm/#more-24410