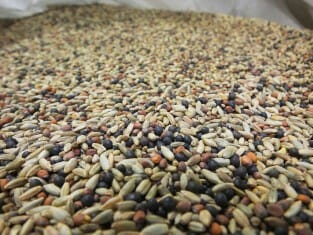 Cover crops are an important practice to sustain the natural resource base upon which agriculture depends, the soil. Cover crops help provide year-round cover to soils which not only reduces erosion from wind and water but also captures fugitive nutrients like nitrate-nitrogen and dissolved phosphorus before they pollute nearby water bodies. In the Cornbelt, farmers have increased their acres of cover crops over the past four years as reported in an annual survey conducted by the Conservation Technology Information Center and the Sustainable Agriculture Research and Education program (2016). But even with this increase in popularity little germplasm improvement for cover cropping characteristics has happened. The species farmers are planting today for cover crops have had little germplasm selection for specific cover cropping characteristics, presenting significant opportunities to improve the environmental and agronomic benefits of cover crops. 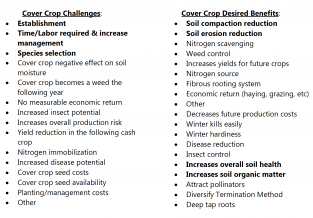 To better understand what cover cropping characteristics farmers want and need to improve their success with cover crops a review of the four annual SARE/CTIC surveys was conducted; specifically on the sections about Challenges and Benefits. In the first three years of the survey farmers were provided with a set of 11-15 Challenges to rank (CTIC and SARE 2013, 2014, 2015). In Year Four (2016), survey respondents were provided 11 Challenges to rank as a Major, a Minor or No Challenge on their farm.  Cover crop farmers ranked 10-17 different Desired Cover Crop Benefits as shown in column two.

What direction for cover crop breeding can be gleaned from these farmer surveys about challenges, benefits and desired traits? Cover crop breeding and germplasm selection programs need to first focus on traits which influence cover crop establishment. Given the variable characteristics of summer and fall conditions in which farmers are planting cover crops a focus on improved establishment characteristics will help farmers overcome their biggest challenge with cover crops. Conditions in which cover crops are planted in the summer could include: dry and extremely dry soil conditions, residual herbicide activity, high temperatures, high humidity and heavy rainfall followed by long periods of no precipitation. Conditions in which cover crops are planted in the fall include: variable rainfall, lower precipitation volumes, variable soil moisture, and variable light penetration through cash crop canopy, little to no seed to soil contact and few growing degree days. A focus on the following was suggested by small grain breeders from KWS, a German seed company, Dr. Rich Little from University of Nebraska and Dr. Lisa Kissing-Kucek from University of Wisconsin as areas of priority.

Seed Size-Smaller seeds will be more likely to move into cracks and openings in the soil surface when aerial or broadcast seeded. This could provide greater ability for establishment success. However selecting for smaller seed size could reduce early vigor which is valuable for variable fall establishment conditions (Kissing-Kucek, personal communication 2016 and Little, personal communication, 2016).

Seed Awn Morphology-Additionally some native grass species use corkscrew awns to “dig” their way in to the soil surface during seed dispersal. For cover crop seeds that have awns like barley and oats evaluating different awn morphology and selecting for those with a corkscrew design could encourage better seed to soil contact. But it needs to be considered that the presence of awns on grains can plug seeding equipment and may be undesirable to farmers wanting the flexibility to apply cover crops either with a spinner spreader or a drill since awns could reduce the flow of seed by plugging up these machines (Kissing-Kucek, personal communication 2016).

Seed Embryo Position-For cereal rye specifically, Claus Nymand, cereal rye breeder with KWS, states that “[cover crop] ability to germinate quickly with very low access to water [is important]. [Cereal] rye has the embryo very close to the surface of the grain and therefore germinates very fast if moisture is available. On the other hand [cereal] rye seedling can also dry out very quickly if there is not enough moisture available till it gets its root system established (2016).” Ensuring that any seed selection maintains the position of the embryo will be important to cereal rye or other grass cover crop’s abilities to germinate quickly when broadcast or aerially seeded.

In conclusion given the environmental variability with summer or fall establishment of cover crops, breeding and germplasm selection programs targeting traits that overcome these barriers like: seed size, seed awn morphology and seed embryo position will improve farmer’s biggest barriers to cover crop adoption: establishment success. Overcoming this barrier would improve the environment for greater uptake of this important conservation and agronomic practice.

Wayman, Sandra, et al. “Organic and conventional farmers differ in their perspectives on cover crop use and breeding.” Renewable Agriculture and Food Systems (2016): 1-10.