Map of My Kingdom has now been performed 56 times — and two more performances are already scheduled. An average of 50 people have attended each performance, so that’s 2,800 who have seen this PFI-commissioned play!

After Iowa Poet Laureate Mary Swander wrote this work that covers the tough questions involved in farmland transitions, Mary and I both thought there would be a handful of performances around the state.

And then the kudos started and the crowds came, leading to more kudos and more crowds. 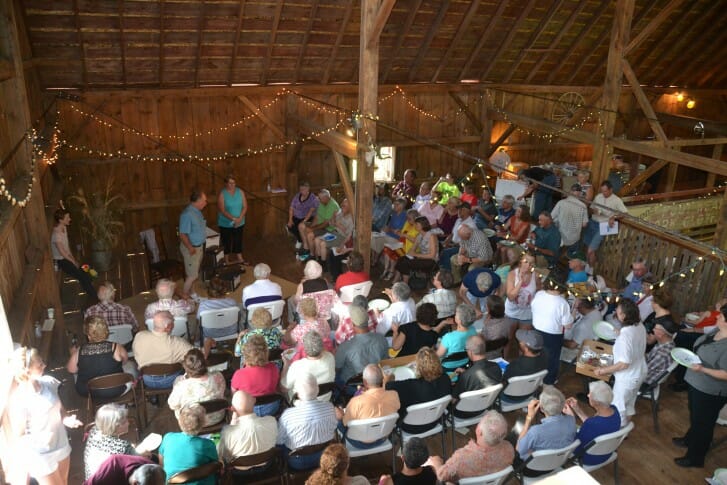 A performance of Map of My Kingdom in one of my favorite spots: a barn near Lawler, Iowa. Here Tom and Irene Frantzen lead a post-play discussion.

“We’ve performed in farmers’ barns and the Federal Reserve Bank of Chicago,” Mary says. “We’ve performed in church basements and New York University. We’ve made a video that can be shown anywhere around the world. And we’ve begun a conversation about our vision for our land, who’s going to get the farm, and how we’re going to handle that succession in a positive way within our own families.”

In Map of My Kingdom, Angela Martin, a lawyer and mediator in land transition disputes, shares stories of how farmers and landowners she has worked with over the years approached their land successions. “Some people literally killed each other over this issue,” Martin says.  Some almost came to blows, struggling to resolve the sale or transfer of their land, dissolving relationships.  Others found peacefully rational solutions that focused not only on the viability of the family, but also of the land.

Land is the thread that binds all of the stories together.  “For most farmers I know, owning land means everything,” Angela Martin says. I am confident there will be 100-plus performances of Map of My Kingdom, because it resonates with those who have been through or are working through challenging land transfer issues that include division of the land among siblings, selling out to neighbors, and attempts to preserve the land’s integrity against urban sprawl.