Mark and Melissa Schleisman, of M & M Farms near Lake City, hosted 46 people on April 11. The sun was shining, cows were out grazing cover crops and a few newborn calves had just been born in a field of cereal rye.

Mark came back to his family’s farm full time six years ago, after a career with Conagra. M & M Farms is a 2,000 acre diversified family farm that includes corn, soybeans, popcorn, hogs and a cow-calf operation. Cover crops are planted on 1,300 of these acres. Most all of these cover crops are grazed by cows in the fall and spring of each year. 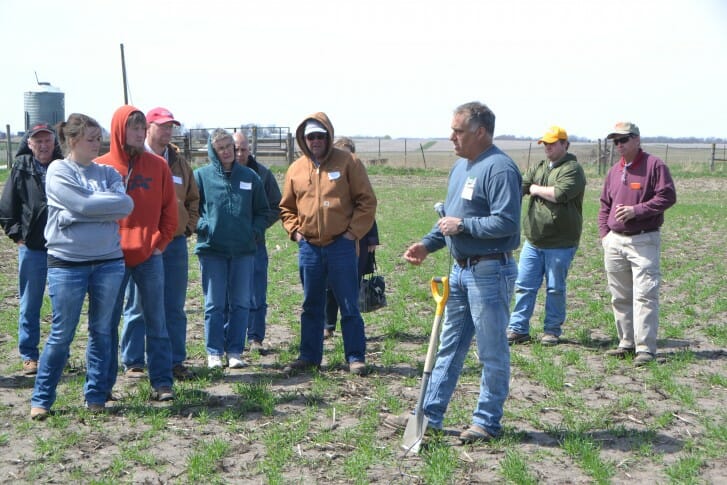 Mark seeds cover crops between August 15 and August 31, using a modified detasseler and a drill. The modified detasseler blows seed into standing corn, and the drill is used to seed covers directly after harvesting popcorn. Mark also custom seeds cover crops for producers in his area and said that in recent years, his business has doubled every year. 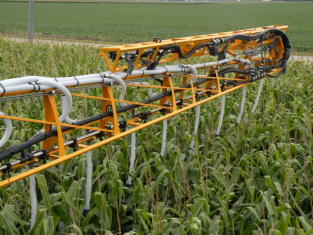 Mark’s cover crop mix includes either cereal rye and/or triticale as the base species, then blends in Jackhammer radish, Purple Top turnip, or Dwarf Essex rape depending on the field. He drills radish after harvesting popcorn seed with the goal of breaking up compaction caused by detasseling. Rapeseed is planted in field corn because it does better with less sunlight than the other cover crop species.

If planning on planting only cereal rye, with the goal to graze it, Mark recommends seeding at 120 pounds per acre. Mark has received EQIP cost-share for the last ten years to help pay for his cover crops and told attendees to look into seeding rates and dates in order to receive cost-share assistance from your local NRCS office. In order to continue receiving cost-share, Mark had to continue adding cover crop species, which ultimately led him to use the blends he’s currently planting.

“We started planting cereal rye because it was easy to calve in. Now, most all of our covers are grazed as a way to justify the costs,” explained Mark. 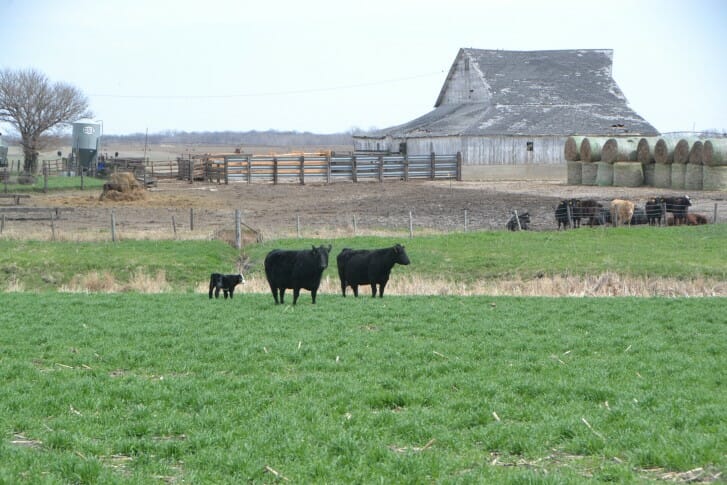 At M & M Farms near Lake City, fields of cereal rye are used as calving pastures. A newborn calf stands with it’s mother in the rye on April 11, 2017.

At M & M Farms, fall offers better grazing opportunities than the spring, because cows have access to the brassicas that don’t over-winter. In the fall of 2016, Mark’s best looking cover crop field yielded 3.8 tons of dry matter per acre of above ground biomass. This field is 150 acres, therefore total tonnage amounted to 570 tons of dry matter. Mark allows his cattle to graze about 85% of this forage, meaning they consumed 484.5 tons dry matter. If cattle received the same amount of dry matter in the form of hay (assuming hay was purchased, cost $80 per ton, and contained 85% dry matter), this would have cost Mark $44,574 or $297.16 per acre. When you work through these calculations, it’s easy to see how quickly cover crops can save you money by putting them through a cow!

Mark is participating in an on-farm research trial titled “Economic Benefits of Grazing Cover Crops” and has been collecting biomass and grazing data for two years. Several other farmers in northwest IA are also involved. Year one data has been compiled in the report shown here. Two additional year’s worth of data will be included in the future. 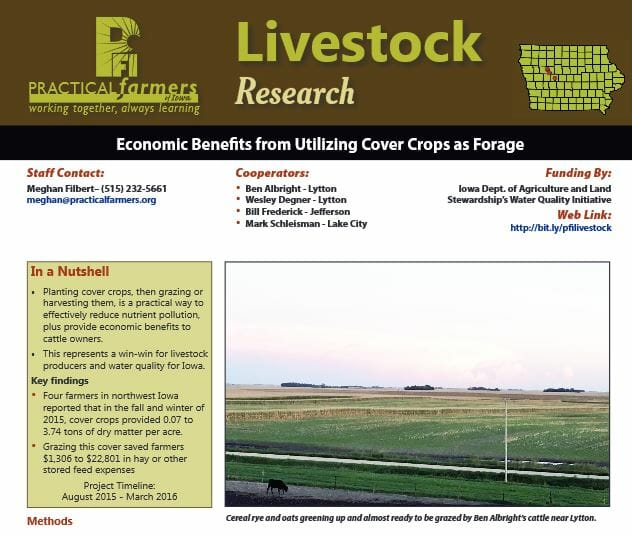 The fields that are furthest from Mark’s house are the fields seeded with cover crop species that don’t overwinter. He grazes these fields only in the fall, then focusing on grazing cereal rye in fields that are closer to his home. This way, he can keep a close eye on the newborn calves in the spring. “For those of you that are only able to graze in the fall, and have the ability to drill your seed, I’d recommend planting rye and oats,” suggested Mark.

Mark mentioned that his cover crop forage provides 22% crude protein, so he doesn’t have to feed extra protein to his herd. He’s put lick tanks out in the fields, but the cows don’t touch them until the cover crop is grazed down.

Questions were asked about compaction and soil health. Mark said that after cattle have grazed a field of cover crops, from a visual standpoint, it looks like the herd has abused the ground, but he believes cover crop roots prevent compaction. Field day attendees had the opportunity to use a penetrometer (an instrument used to measure compaction down to three feet in the soil) and none of the fields showed heavy compaction (over 300 psi).

On one of his sandiest fields, right next to the North Raccoon river, has a low corn suitability rating of 50. Mark has been grazing cover crops on this field and has taken several sets of Haney soil health tests. This field now has the second highest soil health score of all his fields. “Putting cover crops through a cow stimulates biological activity in the soil,” explained Mark.

Perhaps the most exciting benefit Mark has seen on his farm is increased carrying capacity of the land. “My dad ran 200 cow-calf pairs on the same acres that we now run 360 pairs. Because of cover crops, we are producing more on less land,” said Mark. 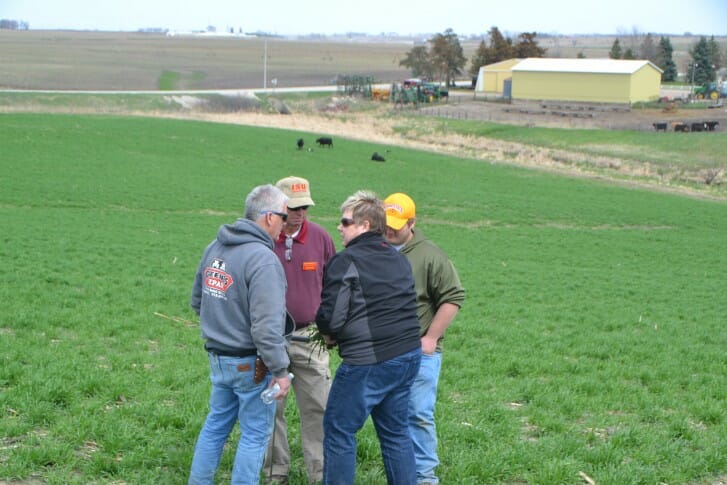 Field day attendees get a close look at rye roots and soil while standing in Mark Schleisman’s calving pasture.

In winter of 2017, many of Mark’s cover crops winter killed. “The popcorn herbicides could have influenced winter hardiness of what we had growing,” suggested Mark.

This spring, he’ll terminate his covers using Roundup, but if you’re dealing with brassicas that overwintered, he recommends using 2,4-D with the Roundup.

Mark plants his cash crops two weeks to three days after termination. “This year we’ll push it back a few days before planting because we’ve had little spring growth up to this point,” said Mark. He’s never had a problem killing cover crops because he’s very methodical about spraying at the correct temperatures.

M & M Farms is located in the sensitive North Raccoon river watershed, where water quality is of utmost importance. Mark’s 1,300 acres of cover crops help tie up nutrients from the manure produced by the 25,000 hogs they raise each year. In Mark’s fields where cover crops are planted, he says the water running into the stream is clear. Mark’s innovative farming practices on his integrated crop and livestock farm are an excellent example of making profits while practicing environmental stewardship.

PFI would like to thank the Iowa Department of Agriculture and Land Stewardship for funding this research project and field day.