A field of cereal rye field used as a calving pasture in early spring at Glenwood Century Farm near Albion, IA.

2008 was an extremely wet year and Wade’s cows were calving in mud. He lost 20% of his calves that year. From then on, Wade decided to strictly calve on fields of green cereal rye and has never looked back. Cow-calf pairs happily graze the fresh forage too, in early spring, when Wade’s permanent pastures haven’t grown enough to allow for grazing.

During the field day, Wade shared his cover crop planting and grazing experiences, then we headed to a cover crop field to test out some soil health tools. 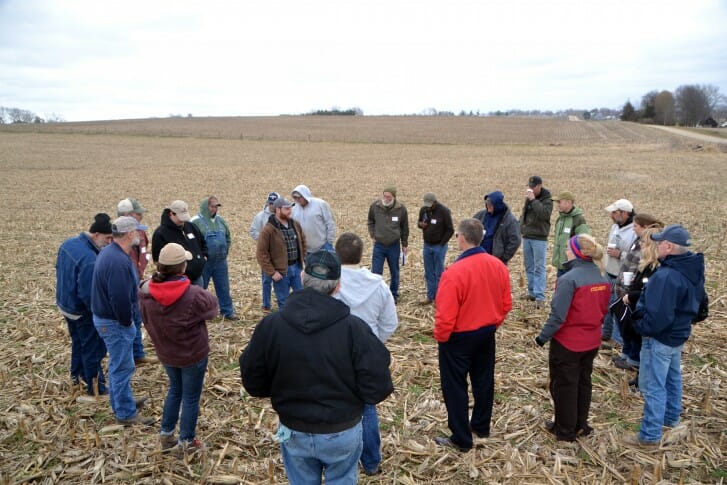 Field day attendees stand in Wade Dooley’s crop field that had been planted with six species of cover crops and grazed by cattle.

March 28th turned out to be too early for cattle to be grazing on the cover crop fields near the house, so Wade put together a presentation with a compilation of photos showing his cattle grazing cover crops in seasons prior. Wade has found that increasing his rye seeding rate to 2 bushel per acre instead of 1 bushel provides adequate forage when grazed.

Wade’s collecting data for an on-farm research project demonstrating the economic and soil health benefits of grazing cover crops. Practical Farmers is working with The Pasture Project to measure below-ground benefits of cover crops and animal impact. Attendees gathered in a field that been aerial seeded with a six-species mix in September 2016. The mix included rye, oats, wheat, kale, vetch and rape. At the time of the field day, only the rye had started coming back and one vetch plant was spotted. “Last fall I mowed this field down with cows,” mentioned Wade, in response to the slow spring growth. Wade explained that he has been using a refractometer to measure the sugar content of the cover crops, a penetrometer to measure soil compaction, and a ring infiltrometer to measure water infiltration rates.

Each attendee had the opportunity to try out the tools in the field while we continued our discussion of how to set up fence and water in order to graze covers. Hopefully the weather will warm up and Wade will get some spring grazing out of this field in April. Stay tuned to learn about the results of this on-farm research trial and the value of integrating livestock into cover crop systems. PFI would like to thank NRCS for funding this research project and field day. 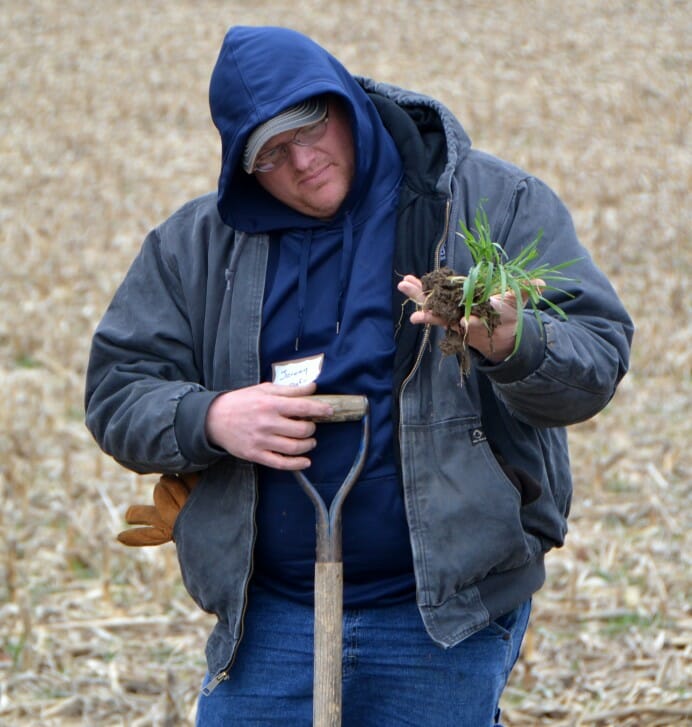 Jeremy Gustafson checks out cereal rye roots in a corn field that was seeded with cover crops in September 2016.