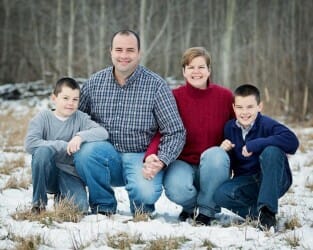 This week on On-Farm is Deb Finch of Finch Livestock. Deb farms with her husband Eric near Marshalltown in east-central Iowa, where they raise meat goats for direct to consumer sales. They began raising goats a little more than 15 years ago. On the show, I talk with Deb about all things goats – from feed to fencing to health to markets, and her upcoming field day.

One of the biggest problems goat owners face is that the animals are highly susceptible to parasites. In the past, when goat owners had problems with parasites, they treated them by administering de-wormer to the entire herd. But Deb and many other goat farmers have moved toward only treating animals they know to be infected, largely in an effort slow resistance to de-wormers. Using the FAMACHA test and doing fecal eggs counts are two ways that goat owners can use to determine which animals need to be dewormed.

On June 27, Deb and Eric will host a two-part event on their farm that will cover those and many other topics. The morning portion — a pre-field day workshop — will be led by Dr. Paul Plummer, a veterinarian at Iowa State University (and goat owner). He will lead a two-hour, hands-on FAMACHA training. The FAMACHA test allows goat owners to assess parasite loads by examining goats’ eyelids. The field day will begin after lunch, where Dr. Plummer will give a lesson on parasite management, and Deb will talk about all different aspects of raising goats while leading a tour of her pastures.

Stay tuned to Practical News each week for new episodes! You can find out more information about On-Farm at practicalfarmers.org/podcasts.