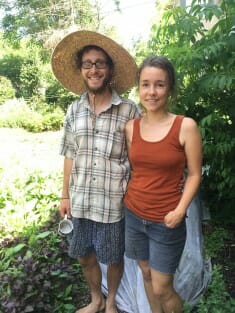 Jon Yagla and Wren Almitra of The Millet Seed Farm

Jon Yagla of The Millet Seed Farm in Iowa City was our guest this week on the show. Jon runs this urban farm with his partner Wren Almitra in the Longfellow Historic Neighborhood of Iowa City. The farm consists primarily of a series of vegetable beds in yards in the neighborhood making up about a fifth of an acre. On that ground, the farm produces food for a 20-person CSA. On the show, we talk about how Jon got started farming; how he manages to cram so many veggies in so little space; using yard waste, city compost and cover crops for fertility; no-till production; Practical Farmers’ Savings Incentive Program and his favorite type of family of veggies to grow, alliums (including the Egyptian walking onion).

On June 24, Jon and Wren will host a field day at their farm focused on urban vegetable production, reducing both living and production costs, no-till production, their CSA and much more. You can RSVP and learn more about their field day here.