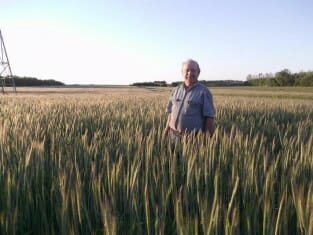 Tom Frantzen in his hybrid rye

This week on the show, On-Farm was on the road – I traveled to Frantzen Farm in northern Chickasaw County to talk to Tom Frantzen. He and his wife Irene run a diversified organic farm where they raise organic hogs, cattle, corn, soybeans, hay and small grains. They have been members of Practical Farmers of Iowa since the beginning, and some of our most enthusiastic supporters. In the interview, Tom says he and Irene can’t imagine a world without PFI. I think most PFI members would agree, and would also agree that the reverse is true: we can’t imagine a PFI without the Frantzens.

The Frantzens will be hosting a field day on their farm on June 29 from 2-5 p.m. and they will be talking about hybrid rye and hogs, and also about the perennial grain crop Kernza – developed by the Land Institute in Kansas – which Tom has a one acre test plot of on his farm. For more information, check out this news release on their field day or see this sneak peek video of Tom talking about the field day and showing his hybrid rye.

On this show, we talk a little about the history of PFI, the future of Frantzen Farm and farm transitions in general, but mainly about what is happening on the farm now. Tom says that giant ragweed has been a bigger problem on his organic farm than all the other weeds put together and has been searching for a solution for years. He thinks he has found one in hybrid rye, a recently developed variety of cereal rye, which yields better and is less susceptible to disease – particularly to ergot, which is a toxin when feeding the grain. One of the big issues with raising rye or other small grains is markets. Tom hopes to get around that by feeding the rye grain to his organic hogs – because the hybrid rye shouldn’t have issues with ergot toxins, and is  currently conducting on-farm research on that subject. We also talk about the many additional benefits of the hybrid rye from soil to water to wildlife habitat.