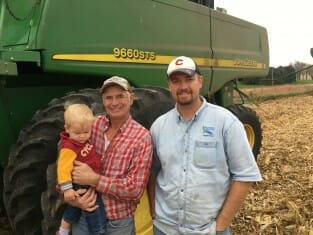 This week on the show, Scott Ausborn stopped by the KHOI studios. Scott farms with his parents, Jack and Linda, where they raise corn, soybeans, hay and pasture as well as sheep and cattle. He also works for Blue River Hybrids, an organic seed company based in Ames, and he serves as board president for the Iowa Organic Association. Scott and his family are currently transitioning some of their farm to organic, and on the show we talk about that, from why they decided to transition to how the process works.

On July 11th, Scott and his parents will host a field day on their farm near Ida Grove in north central Iowa. The field day, a partnership between Practical Farmers of Iowa and Iowa Organic Association, will focus on transitioning a row crop farm to organic production. To RSVP or learn more information about the field day, check out the press release.