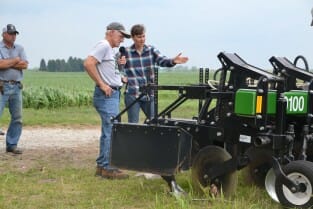 “You’ve heard the song ‘Stuck in the Middle with You,’ that’s basically what I am,” says Craig Fleishman of Minburn. He hosted a field day on June 28 on his farm, Cardinal Farm. “I’m halfway between organic and industrial ag,” he says, “What I’m trying to do here is reach a balance between steel and herbicide. I’m trying to borrow a little bit from both sides. With this climate and these soils, I find it’s the best for what I’m trying to do. There’s enough tillage in the system to battle against resistant weeds and reduce the herbicide usage but there’s enough herbicide, so when we have rainy periods in June, we still have weed control – it bridges that gap.”

Craig uses a ridge-tillage system, and has been using it since 1981 after he read Ernie Behn’s book “More Profit with Less Tillage” and visited with Ernie. For more information on ridge-till, check out the “Ridge-Till Roundtable” session from the 2017 PFI conference.

“The whole idea with ridge till is that you’re always planting into a consistent seedbed,” he says, “and it’s a raised seedbed, so it drains off and then your water is forced to the valleys where all the residue is, which reduces erosion potential.” 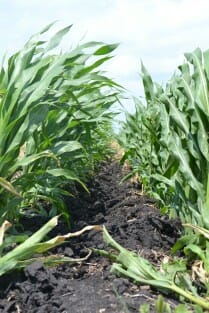 Craig cultivates corn twice, the first time he side-dresses with anhydrous, the second time is a more aggressive cultivation to build ridges. He burned down the rye and weeds about 10 days before planting (with beans, he did that the day before planting). He says he hopes that the rye will help with erosion control – he says you do expose the soil somewhat with ridge-tillage, and he hopes that residue will help eliminate that little bit of exposure. 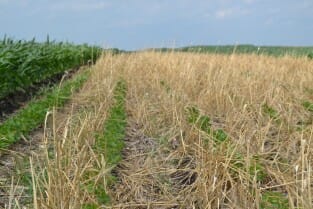 Soybeans were planted into a late-terminated cereal rye cover crop.

Next year, beans will be planted onto those ridges. For both corn and soybeans, he sprays a pre-emerge herbicide with the planter in a 15-inch band. He says that takes care of the weeds in the row, but they still have to deal with the middles of the rows and that’s where the cultivator comes in. 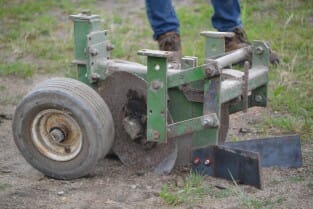 Craig has also long been experimenting with strip intercropping, planting strips of corn, soybeans and oats next to each other. When asked why he does that, he responded: “to give people something to talk about.” And the field does look quite different than the surrounding landscape. But actually, he says, that it changes the plant architecture a little and the outside rows produce more grain, but also it breaks up the field pattern – and therefore cuts down on gullies and erosion. “I don’t do it because it’s easy, that’s for sure,” he says. 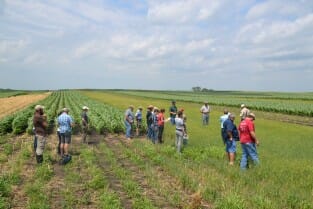 The crowd learns about strip intercropping and ridge till at Craig’s farm.

Craig also takes water samples for on-farm research he’s conducting with Iowa Soybean Association. He samples 4 tile locations on his farm and has been doing this for close to 10 years. “It’s just interesting to know it,” he says. In general, the water quality coming off of his farm is improving, but he says we all have a long way to go if we want reach our goal. “Strategies need to be put in place on the ground, and the easiest thing to do would be to move fall application of nitrogen to the spring, but that actually seems like it doesn’t make that much of an impact,” he says, to actually reduce nitrates in the water he says, “more of its going to be the cover crops, bioreactors and saturated buffers.”

To improve conservation on his farm, he has enrolled some acres into CRP pollinator habitat programs. He says it’s easier to do this than to try to farm those acres and get the tractor stuck. 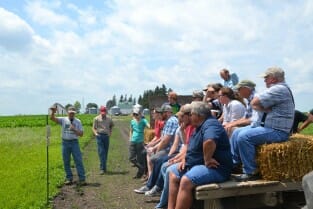 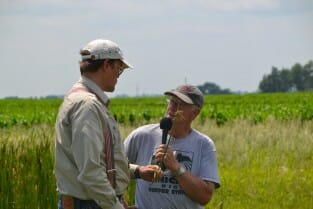 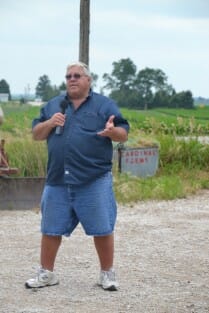 Craig explains how he bands herbicide and uses hood to prevent drift. 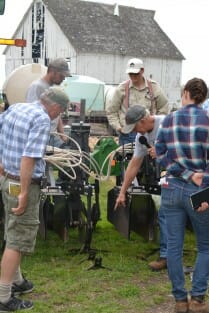 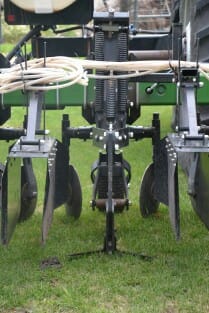 Close-up on one of Craig’s cultivators.