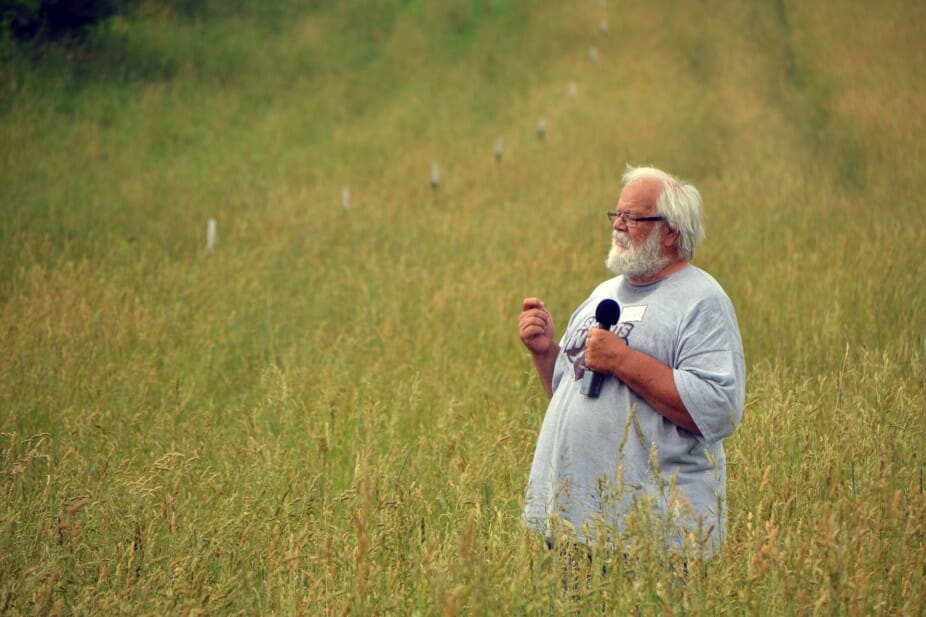 Phil Specht speaks to field day attendees while standing in the pastures where bobolinks nest and cows graze. Below, a poem written by Phil.

Leaving Home, Flying Home
The tall Pampas
now strips, corners.
Soy in bare fields.
Each year easier to leave
Bobolink’s goodbye Argentina.
Wing beat by wing beat
not knowing, following faith.
Somewhere in Iowa
the tallgrass waves.
Still, for one more generation.
Melody of meadowlark
beckoning you?
Beat by tired beat
Home when you can fly
no further?
Or the optimism of green?
Color of life.
Inspiration of poets.
Joined, sharing paradise.
Even if briefly, eternally.

Phil Specht, a farmer, poet and avid birdwatcher shared his knowledge with a group of 50 at a field day on June 22. Prairie Quest Farm, near McGregor was the farm of Phil’s late brother Dan, and is now owned by Mary Damm. Mary is a prairie ecologist studying the diversity of plant species on the farm and works with Phil to manage bird habitat on rotationally grazed pastures.

Beef and dairy cattle are grazed from paddock to paddock, moving often, but not too often. “Mob grazing or high-intensity grazing doesn’t work for conserving grassland birds. When cattle aren’t grazing at super high densities, they graze around bird nests, instead of trample them,” explained Phil. Bobolinks, a bird species that migrates from South America to breed in the northern US, is of particular interest to Phil.

Bobolink numbers are in decline, but you wouldn’t know that while standing in the pastures with Phil and Mary. The return of bobolinks indicates healthy landscapes. Phil said bobolinks like to nest in vegetation that is 8 inches or taller, so Phil carefully manages his grazing to promote ideal habitat for bobolinks. 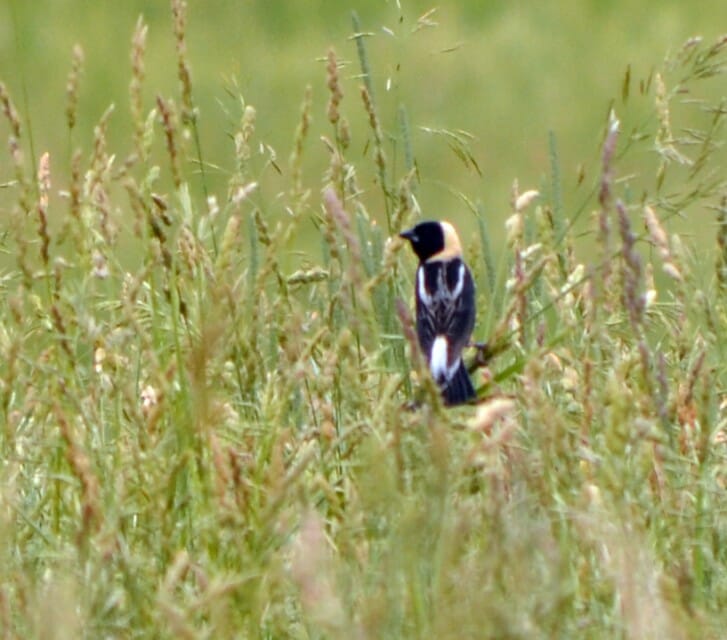 A male bobolink perched in a pasture at Prairie Quest Farm near McGregor, IA.

Mary Damm presented the data she’s been collecting during a multi-year study at the farm. She’s been monitoring plant species and plant densities in grazed pastures, which tell her how the pastures compare to native prairies. Bird counts and nesting data are then incorporated with the plant data to better understand what the birds prefer. Mary explained that the Driftless region of the upper Midwest is a globally important bird area because of the Mississippi Flyway, which is a bird migration route that follows the Mississippi River. “This data is bringing the pastures to life for me,” exclaimed Mary. 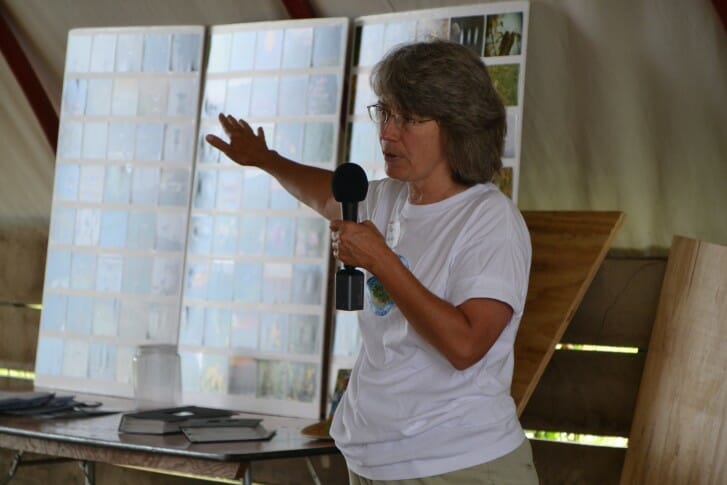 Prairie ecologist, Mary Damm, discussed her research findings on pasture plant species. “This data is bringing the pastures to life for me,” exclaimed Mary.

100 acres of Prairie Quest Farm is enrolled in the Conservation Stewardship Program (CSP) a cost-share assistance program funded by the Natural Resources Conservation Service (NRCS). Helen Leavenworth, a soil conservationist with Clayton County NRCS, explained conservation programs and gave visual demonstrations on soil health. Using soil from pastures at Prairie Quest farm and soil from a neighboring row-crop farm, Helen conducting the slake test and water infiltration test. She also lead the group out to a nearby pasture to explain how score pasture conditions using the Midwest Pasture Condition Scoresheet. 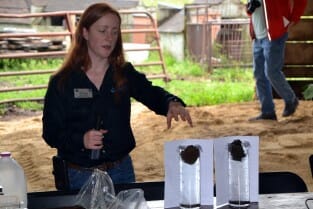 Paul Skrade, Assistant Professor of Biology at Upper Iowa University, presented on bird habitat and showed pictures (taken by Phil) of the many different birds spotted on the farm. The three messages he delivered to the audience were: 1) Grassland birds are doing poorly due to habitat loss. 2) Conservation and agriculture can co-exist. 3) Varying heights of grasses are good for birds. Paul said there’s wonderful biodiversity in the pastures at Prairie Quest Farm. Paul realted the creation of conservation habitat to the famous Iowa movie, Field of Dreams, by proclaiming “If you build it, they will come!” 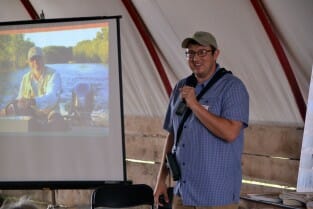 After several years of conducting on-farm research, Phil and Mary have found more bobolink nests in grazed vegetation compared to ungrazed vegetation. Phil follows the rule of thumb when grazing – take half and leave half. “We’re trying to do a false imitation of a working grassland ecosystem,” said Phil, comparing his system to that of bison grazing on prairies hundred of years ago. The modern day benefits of meat and milk make Phil’s system profitable, while also conserving the environment.

Phil told the crowd that one of Dan’s famous lines was,”Look! There’s a bobolink. It’s all working.” Field day attendees spotted a handful of bobolinks while standing in the pastures – an indicator of agriculture and conservation beautifully co-existing. It’s all working at Prairie Quest Farm. 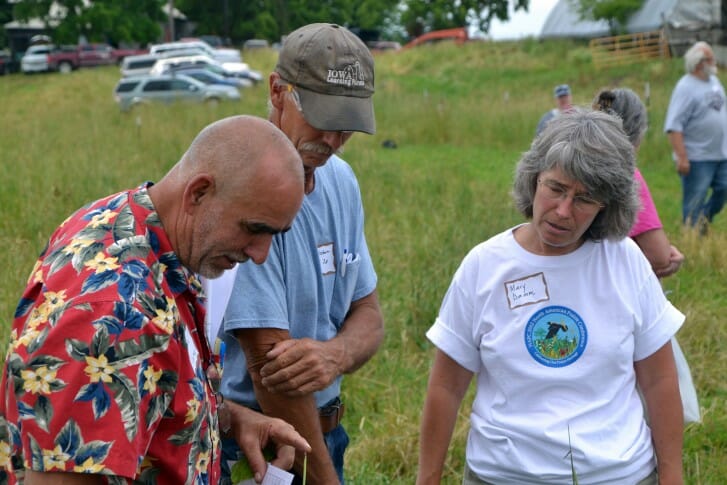 For more from Phil, check out his interview on our podcast, On-Farm: Conversations with Practical Farmers. Practical Farmers thanks our major sponsors, Iowa Farmers Union, Iowa Natural Heritage Foundation, Niman Ranch, and the National Fish and Wildlife Foundation for sponsoring this field day.