How wonderful that the PFI Board has chosen Angela and John Tedesco to be the 2017 recipients of the Farmland Owner Award!

I admire the Tedescos because, as they thought about their farm legacy, they first decided on a clear goal: To keep their land “as a farm for someone to continue using it in a sustainable manner.”

An ambitious and admirable undertaking for any farmland owners; even more so for this couple who watched the unending urban sprawl around Granger swallow up farmland around them. In the end, they realized their goal of keeping their land a farm with a donation of 13 acres of farmland to Practical Farmers of Iowa in 2016.

“Because it’s right on Highway 17 in Granger, I knew if we sold the land to another farmer, eventually it could get sold for development prices,” Angela says. “It’s important to us that it remain a farm for someone to continue using it in a sustainable manner.” 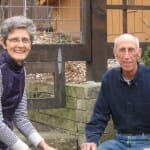 Angela and John considered many options to keep the farm a farm. And they had to make compromises along the way. In the end, they could only realize their donation to PFI if they sold seven acres of the land to a developer.

I was an early member of Angela’s Community Supported Agriculture (CSA) more than 20 years ago; I got to know her as she delivered to my doorstep while I watched my newborn son. She was a pioneer in developing the CSA in Iowa, and one of the few women speakers at early PFI events I attended. She was a thoughtful and responsible PFI board member, and she and John have always been generous PFI donors.

Before she retired, Angela well-prepared a next generation farmer PFI member Ben Saunders, to take over. She is a perfect example of the leader who leads with quiet and by example.

When traveling from Des Moines to Ames, I always look forward to driving by the farm. It is an oasis in a sea of sprawl, and such a reminder of what farms can be with the right person, vision and very hard work.  Angela and John turned that farm from bare ground into a farm teeming with life, including hundreds of varieties of more than 30 types of vegetables and fruits. As she describes in her Farm Legacy Letter in sensory detail:

Dewdrops on leaf margins and spiderwebs.…The sounds of the meadowlarks and killdeer in the spring and the hawks screeching overhead, raindrops on the hoophouse plastic, and the clicking of the stirrup or wheel hoe as it moves through the soil…The aroma of basil if brushed and other herbs from rosemary to lavender, a barnfull of freshly harvested garlic and ripe strawberries in the heat of the day.”

For Tamsyn Jones’s excellent article on the Tedescos’ land gift, read page 9 of the  Winter 2017 issue of The Practical Farmer here.